a guest blog by Patrick Armstrong, PhD Candidate at the University of Cambridge.  Read more about the Library's collections relating to Harold Pinter on Discovering Literature.

‘In order that the film artist may create a work of art’, Rudolf Arnheim argued in his 1933 book, Film as Art, ‘it is important that he consciously stress the peculiarities of the medium’. When, in the early 1970s, Harold Pinter collaborated with Joseph Losey and Barbara Bray to write a screenplay of Marcel Proust’s novel A la Recherche du Temps Perdu (1913-1927), they were keen to find a means of foregrounding the peculiarities of the film medium while in some way maintaining a fidelity to the original text. How could they condense and distil Proust’s great novel into a (commercially viable) feature-length film? One answer is, simply, that they could not: to this day, the film has never been made (although there has been a sound broadcast on BBC Radio 3 in 1995, adapted by Michael Bakewell, and a modified National Theatre production in 2000, directed by Di Trevis). To quote the resigned Pinter, who would remain in search of lost funding: ‘The money to make the film was never found’. With Pinter's what would have been Pinter's 90th birthday passing last weekend, however, Lady Antonia Fraser has recently spoken of her desire for his screenplays and films to be more widely known and appreciated. The prospect of producing the Proust film remains a tantalising one. Still, any attempt to bring the screenplay to filmic fruition would be a true labour of love. To give my two cents’ worth, I would welcome the unlikely extension of Luca Guadagnino’s beautiful ‘Desire Trilogy’ (into a ‘Desire Quadrilogy’) to incorporate a long-awaited cinematic realisation of Pinter’s Proust Screenplay (with, if you’re asking, Timothée Chalamet as the young and fragile Marcel, Ralph Fiennes as Charles Swann, Mia Goth as Albertine, and, à la Suspiria (2018), multiple roles for Tilda Swinton).

It would be misleading to call this work ‘Harold Pinter’s Proust Screenplay’ because it was, from the outset, a thoroughly collaborative project. In his 2015 article on The Proust Screenplay, Matt Harle explains how the first draft - now housed in the Harold Pinter Archive at the British Library - began to take shape:

Working as a trio, they [Pinter, Losey and Bray] spent time in France visiting significant Proustian sites [Illiers, Cabourg and Paris] and planning the film before Pinter sat down to     write a draft of the script. The script was completed in just three months in November 1972, Pinter having adapted the entirety of Proust’s novel into a single four-hour script. This     was notably against the advice of Samuel Beckett, who suggested that the team start with Le temps retrouvé.

Both Losey and Bray made extensive comments on Pinter’s first draft in 1972. Losey, for instance, expressed his concerns about the practicalities of using a pure white screen (later replaced by the Vermeerian ‘yellow screen’), because of the likelihood of it becoming scratched and dirty. The archive shows that Bray, who was close friends with Beckett, and the project’s main authority on Proust, made a number of helpful suggestions relating to the structure of the film. The adaption also bears the imprint of Beckett’s own work, including his early essay on Proust, simply entitled Proust (1931). Pinter was surely under the spell of Beckett’s forays into film and television in the 1960s. The latter had made his own short film, entitled Film, in New York in the summer of 1964, while, with Eh Joe, a piece for television that was also completed in 1965, Beckett made use of filmic techniques by incorporating close-ups of the protagonist’s face (a device Pinter frequently uses in The Proust Screenplay). The ‘fresh and shrill’ garden gate bell that sounds at the beginning and end of Pinter’s screenplay, moreover, is reminiscent of the piercing bell in Beckett’s Happy Days (1961). 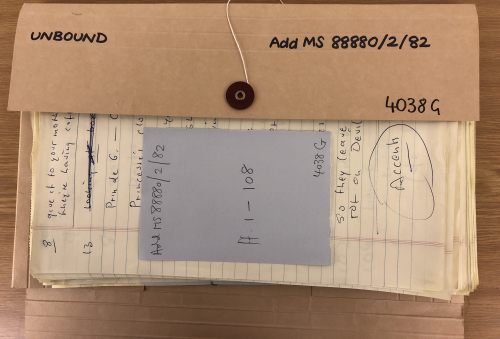 Pinter’s drafts and notes towards the screenplay are available to view in our Reading Rooms at Add MS 88880/2/82.

The drafts of the adaptation show how Pinter gradually selected the more distinctly filmic aspects of Proust’s novel and made them central to his screenplay: the patch of yellow wall in Jan Vermeer’s View of Delft (c.1559-1660), the romanticised visions of gondolas and palazzos in Venice, the dining room and sea at Balbec, and so on. For three months of 1972, Pinter read A la Recherche du temps perdu every day, taking ‘hundreds of notes’ along the way. When reading through these many notes and drafts, Pinter’s keen eye for detail becomes apparent: he draws attention to Albertine’s many rings, to the simple aigrette in the Duchesse de Guermantes hair, and, more broadly, displays a Proustian attentiveness to jewellery and clothing. ‘Clothes’, as Diana Festa-McCormick argues in her 1984 book Proustian Optics of Clothes, ‘act as the revealing factor for often unavowed psychological responses on the part of the narrator and as indications of the wearer’s social roles’. After all, Proust’s narrator ultimately resolves to construct his book, ‘not say ambitiously like a cathedral, but quite simply like a dress’. Comparably, Pinter tries to find the structural elements that are essential to the whole, the seams that join the carefully made garment together.

Proust’s own suspicion of the relation between the novel and the cinema is made clear in a parenthetical remark from the final volume, Time Regained:

(Some critics now liked to regard the novel as a sort of procession of things upon the screen of a cinematograph. This comparison was absurd. Nothing is further from what we have     really perceived than the vision that the cinematograph presents.)

Correspondingly, Pinter writes about the difficulties of adapting Proust’s great novel, concluding that a fidelity to the text must be retained through the distillation of its essence. This is an understandable position given that the word count of Proust’s novel is somewhere in the region of 1,267,069 words. Despite the daunting challenges of radically condensing the original, Pinter found working on the adaptation ‘the best working year’ of his life, as he wrote in the introduction to the 1978 Metheun edition of the screenplay. Reading through Pinter’s reams of notes allows us to perceive the slow process of distillation. As one reviewer for the New Statesman put it, the finished screenplay is ‘a beautiful working model in which Proust’s million and a half words have been brought lucidly down to 455 shots’.

At the early stage of the screenplay composition, the notes offer an accumulation of images and snatches of dialogue, as if Pinter were peering in through one of the windows of the Parisian drawing-rooms frequented by the narrator, half-hearing conversations and half-seeing figures from the world of fashion. Proust’s novel demands that the reader imagines themselves seeing, leaving space for the individual’s imagination to give the scenes and characters shape. We are invited to read the novel through the lens of our own experiences, comparing them with those recounted by the narrator. Yet, the difficulty for Pinter is representing through film the workings of the narrator’s mind. As Walter Benjamin suggested in his 1929 essay, ‘The Image of Proust’, ‘the important thing for the remembering author is not what he experienced, but the weaving of his memory, the Penelope work of recollection’. For Michael Billington, Pinter’s official biographer, the ‘screenplay was based on a chain of visual and aural motifs, and interlocking images’. In this sense, the adaptation is true to the original in its attempt to foreground the workings of involuntary memory. As you read through Pinter’s many notes, the same images and impressions (the napkin, the sea, the steeples, etc.), familiar to any reader of Proust’s novel, appear and reappear throughout the drafts. These become the central images of the finished screenplay, the luminous fragments that disrupt the paralysing effects of habitual perception.

The early notes show Pinter carefully working out the chronology and order of the book, including the ages of the characters at various stages in the narrative. Though onerous, plotting the ages of the characters at different stages of the narrative is an important task because, as Benjamin writes, ‘to observe the interaction of aging and remembering means to penetrate to the heart of Proust’s world, to the universe of convolution’. Pinter’s many lists of the narrative’s key events and images can be compared with Beckett’s incomplete cataloguing of the crucial, epiphanic moments of involuntary memory in his essay Proust:

Many of these ‘fetishes’, as Beckett calls them, are central to Pinter’s adaptation, which foregrounds the narrator’s revelatory impressions and memories. Undoubtedly, Pinter would have been familiar with Beckett’s dazzling early reading of Proust’s epic, in which he points out that the narrator’s ‘eye functions with the cruel precision of a camera’ – an idea that seems to lurk behind the numerous close-ups of faces and the shots from Marcel’s point of view.

Pinter’s screenplay is an attempt to dislocate and reorder time, true to Proust’s project of immobilising and recovering fragments of lost time in their pure state. Pinter dislocates narrative time in order to focus on the connections between images and sounds. In so doing, Pinter is able to stress the peculiarities of the film medium while remaining true to the original text. Aware of the opportunities as well as the restrictions of adaptation, Pinter realises that film offers the possibility of cutting swiftly between, or even overlaying, some of the key motifs and artistic figures of Proust’s novel: namely music, as represented by the composer, Vinteuil, and literature, as represented by the writer, Bergotte. Shot 31, for instance, succinctly blends visual art, literature, and music (which Beckett called the ‘catalytic element’ in Proust): ‘Flash of yellow screen. Music of Vinteuil’. The opening montage provides an opportunity to cross-cut between the vital moments of involuntary memory in the novel: the Proustian epiphanies, though there are no famous madeleines or teacups in sight. It is a non-verbal sequence of thirty-four shots (some would argue thirty-five or more), resembling the symphonies of visual movement created by the montagist Slavko Vorkapich. Yet, as the many drafts indicate, a considerable number of words – read, written, rewritten, erased – were considered to create this iconic, though as yet unseen, wordless opening.

Posted by Eleanor Dickens at 11:36 AM