by Ian Cooke, Head of Contemporary British Published Collections. The Michael Marks Awards were founded by the British Library and the Michael Marks Charitable Trust, and partners today include the Wordsworth Trust, the TLS, Harvard University’s Center for Hellenic Studies, the National Library of Wales and the National Library of Scotland. Join us online to hear the winners announced on 14th December 2020. 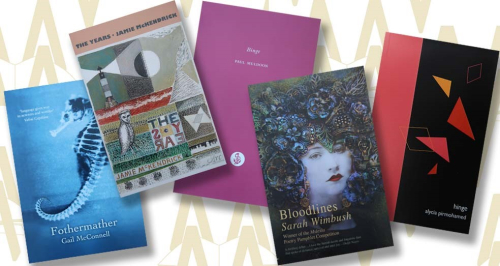 The shortlisted pamphlets for the Michael Marks Award for Poetry 2020

The Michael Marks Awards for Poetry Pamphlets will be announced on Monday 14th December, at a free online event. Join us to hear from the publishers and shortlisted and winning poets.

The Awards are now in their 12th year and celebrate poetry pamphlets as a site for innovation, making new poetry accessible in a variety of inventive styles and formats.

At the start of 2020, we were uncertain about how the Awards would run this year. Over its history, the Awards has relied on people being able to travel and meet in person, whether for judging meetings or for the awards ceremony itself. The latter is a highlight, bringing together poets and publishers and hearing each other read and speak.

However, we quickly gathered very strong support for the Awards from the people that we spoke to, who emphasised the importance of celebrating new poetry and the role of independent publishers in this year particularly. The response to our call for entries was greater than ever before, with almost twice as many pamphlets submitted, and many new publishers. Although we wouldn’t be able to hold our celebration at the British Library as usual, we were excited that holding an event online would allow us to include far more people than we would usually be able to accommodate in our physical spaces. Poetry pamphlets are a fantastic way to bring exciting new poetry to a wide audience, and we wanted our online Awards to follow in that spirit.

Our shortlisted poetry pamphlets and publishers show that excitement, and demonstrate how poetry pamphlets reflect a very wide range of expression and experience. These include the first pamphlet from Sarah Wimbush, Bloodlines, and Alycia Pirmohamed’s second pamphlet, Hinge. But also pamphlets from poets with longer publishing histories, such as Jamie McKendrick’s The Years and Paul Muldoon’s Binge.

The poetry in the pamphlets reflect movement and changing perspectives, with Alycia Pirmohamed’s Hinge using themes of landscape, space and migration. Paul Muldoon’s Binge moves from detailed descriptions of place and experience in Northern Ireland to locations around the world and across history.

Fothermather, by Gail McConnell, describes change and formation in a different sense, from the development of a baby before birth, through to the change in identity of a new parent and — much more broadly — to the way that things are given form and names. Bloodlines incorporates a highly personal use of language and presentation of different characters, to explore and express Sarah Wimbush’s Gypsy/Traveller heritage. In Jamie McKendrick’s The Years, the relationship between the poems and pictures throughout the pamphlet allow a conversation between text and image, allowing one to influence how the other is read or viewed. 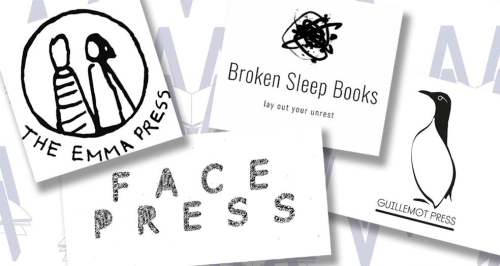 The shortlisted publishers for the Michael Marks Awards 2020

As with the poetry pamphlets, the shortlist for publishers show a commitment to representing a range of voices, coupled with a very careful attention to the form in which each poet and pamphlet is presented.

Guillemot Press, a former winner, gave each pamphlet its own clear identity, through choice of format, sustainable paper stock, and type face.

Face Press similarly use materials that reflect the character of each pamphlet, with the judges noting that ‘every pamphlet submitted by Face Press was an individual event’.

Broken Sleep Books show a strong commitment to inclusivity and community engagement in their publishing, with several initiatives designed especially for writers on low incomes.

Another former winner, the Emma Press, equally take an active interest in representing poets from different backgrounds and experiences, and in cultivating a love for poetry amongst new audiences.

At our Awards event on 14th December, all our shortlisted publishers and poets will speak and read. We will also hear from our winners for the Illustration and Poetry in a Celtic Language awards, as well as from our judges and partners. We are very excited that this year’s awards ceremony can be opened up to a wider audience online, and hope you can join us to hear the winners announced.