by Dr. Alexander Lock, Curator of Modern Archives and Manuscripts. The Melford Hall Manuscript is now available to view online, in full, on our website.

The British Library has recently announced its acquisition of the Melford Hall manuscript: a rare seventeenth-century volume containing the poetry of John Donne (1572–1631), one of the most popular poets of the late sixteenth and early seventeenth centuries. Dating from the 1620s or early 1630s, the Melford Hall manuscript comprises over 130 poems by Donne and is one of the largest near contemporary scribal collections of his work. The manuscript has never been properly studied and was unknown to scholarship until it was discovered in 2018 in the library at Melford Hall, Suffolk. As one of the largest extant manuscript collections of Donne’s poetry, it covers the entire range of his poetical output, and – until its sale – was probably the most significant manuscript collection of Donne’s poetry to remain in private hands. ‘Elegy XIX: To his Mistress Going to Bed’ by John Donne from the Melford Hall Manuscript (Egerton MS 3884) © British Library Board.

The discovery of this manuscript is particularly exciting as it provides new evidence for the study of Donne’s work and the literary culture in which it was created. John Donne should be understood as a ‘coterie’ poet in the sense that his poetry was almost entirely distributed (or ‘published’) in manuscript copy amongst a select circle (or coterie) of privileged friends, acquaintances and potential patrons. These readers would, in turn, copy Donne’s lines to keep in their own private collections or to share with close friends. Only one English poem written in Donne’s own hand has survived and so much of what we know about his poetical output comes from these manuscript copies made for, and by, his ‘coterie’ of readers. The Melford Hall manuscript, therefore, is of outstanding literary significance because it provides new evidence as to how Donne’s poetry was written, copied, circulated, and received in the early seventeenth century. It also offers scholars important new evidence for the study of the manuscript transmission of poetry in the early modern period. 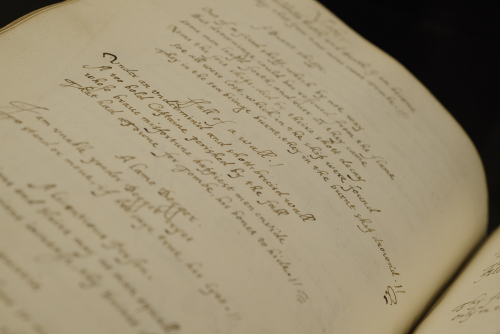 Detail of ‘Fall of a Wall’ by John Donne from the Melford Hall Manuscript (Egerton MS 3884) © British Library Board.

Following its discovery in Melford Hall the manuscript was subsequently sold at auction where it was purchased by an overseas bidder. Following independent assessment of the importance of the manuscript the Department for Digital, Culture, Media and Sport announced a temporary export bar on the work in a bid to save the manuscript for the nation. The British Library was ultimately able to raise the money to secure the acquisition of this manuscript and is delighted to announce that it can now be freely examined by readers online and will be available in the Library’s reading rooms from early 2021. 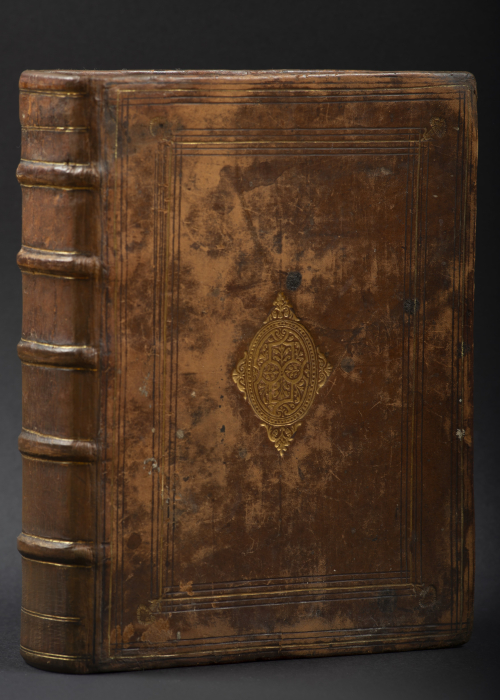 The manuscript retains its seventeenth-century binding and contains some of Donne’s most popular works including his songs and sonnets, elegies, epigrams, erotic verse, satires, epithalamia, verse epistles, obsequies, and divine poems. Alongside the poetry of Donne, the volume also features verse by other contemporary writers such as Francis Beaumont (1584–1616), Thomas Carew (1595–1640) and Sir Thomas Overbury (1581–1613). It also intriguingly contains a series of six currently unknown and unattributed seventeenth-century poems. Towards the back of the volume, and added in a later seventeenth century hand, are notes made on the sermons of Robert Meldrum (c.1653–1699) and a number of popular songs that were copied out in the mid-eighteenth century.

The manuscript has now been fully digitised and is freely available online on Digitised Manuscripts. The acquisition and digitisation of this manuscript was made possible with a grant from the National Heritage Memorial Fund (NHMF) and with funding from the Friends of the National Libraries, the British Library Collections Trust, the T.S. Blakeney Fund, the Bridgewater Fund, and the American Trust for the British Library with thanks to Paul Chrzanowski and Patrick Donovan.

Posted by Callum McKean at 9:55 AM