What’s in a Name? The Archival Legacy of Emilia Francis Strong/Pattison/Dilke

By Jessica Gregory, Curatorial Support Officer for Modern Manuscripts, 1601 – 1950. The papers of Emilia Francis Dilke (Née Strong, formerly Pattison) can be found at Add MS 43903-43908. The correspondence of Emilia Francis Dilke and Gertrude Tuckwell are found at Add MS 49610-49612. The British Library’s exhibition, Unfinished Business: The Fight for Women’s Rights, explores the history of women’s rights activism and is open now. 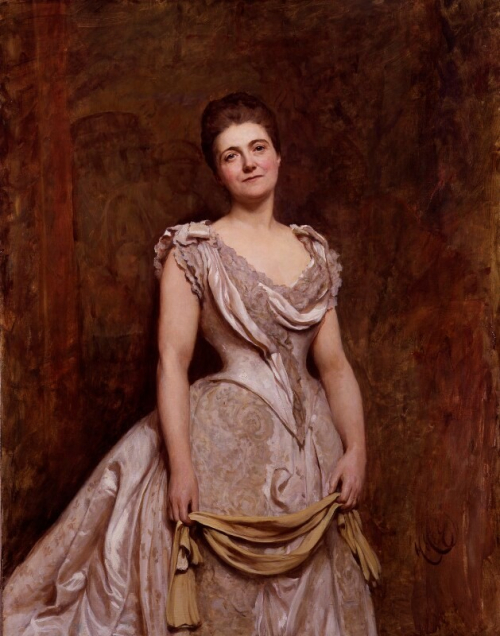 For too long, the achievements of women of the past have been lost; many who have made significant contributions to various fields find themselves remembered only in relation to the men in their lives. Tracing their own histories through archival collections can be a difficult task: within their husband’s papers, their legacies are already framed by the names they inherit and the proximity to power which was granted by them. Retelling the achievements of women from the past often requires us to reconstruct and draw together their lives through their disparate archival legacies, so often mapped according to their inherited names.

One such case is that of Emilia Francis Strong. She would become an essayist, author, art historian and women’s rights activist, but despite her varied intellectual output, there is a surprising lack of primary material preserved. The British Library holds some of her papers within her second husband’s archive: The Charles Dilke Papers. There are also a few items of correspondence within the collections of other powerful men too, but she has — to adapt Woolf’s famous phrase — no  Archive of her Own.

Strong’s marriage to Dilke and her social class ensured that her name was preserved in history, but her varied intellectual pursuits have been overshadowed by her husband’s sex-scandal, which even now would have tabloid editors licking their lips. (And which, regrettably, I have to go into in order to contextualise her life). 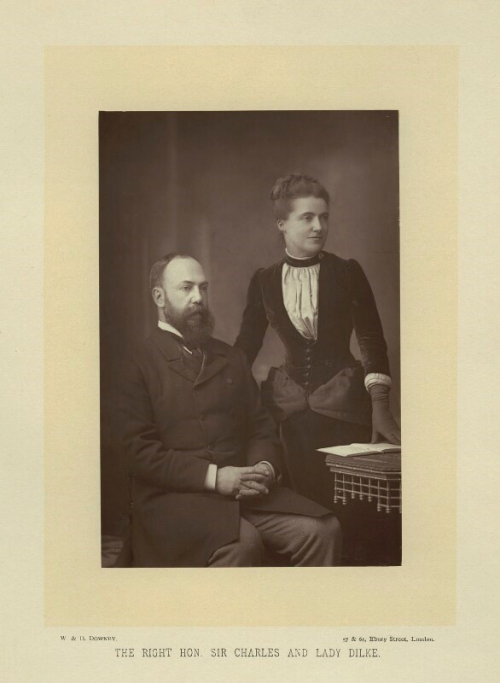 Charles was a Liberal MP with a radical agenda, but the discovery of his extramarital relations with his brother’s mother-in-law, followed by his brother’s sister-in-law, Virginia Crawford, was just scratching the surface of his misdeeds. When Mr. Crawford’s divorce trial made the headlines, the judge found Virginia Crawford guilty of adultery, but — paradoxically — found Charles Dilke innocent of the same crime. On top of this, Dilke found himself pursued by an investigative journalist with a grudge, and was soon forced to enter a case in an effort to clear his name, which catastrophically backfired when his heavily mutilated liaison diaries were paraded in court. The torn and self-censored diaries seemed to prove Charles Dilke’s adultery and he became a figure of ridicule for his desperate attempts to cover up his indiscretions. Emilia had defended Charles at the trial, but the damage was done. His reputation crumbled and his love-life was the talk of the town for many years to come. 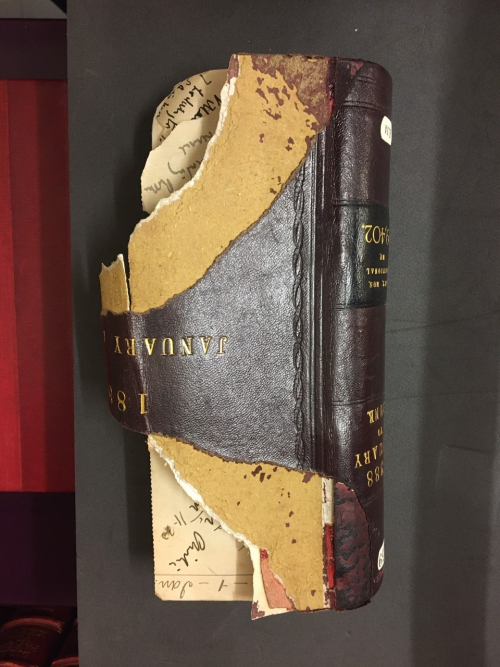 Emilia’s legacy — like her life — is framed by this relationship.  The situation would not be much improved by remembering her as ‘Emilia Pattison, wife of Mark Pattison’, either; her first marriage was so famously unhappy that she and her husband are said to be the real-life inspiration for the unhappy couple of Mr. Casaubon and Dorothea Brooke in George Eliot’s, Middlemarch. 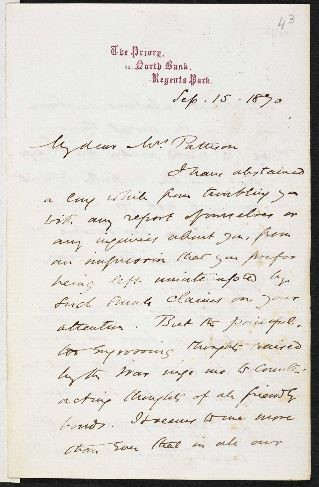 However, apart from her two marriages, Emilia sought to establish a name for herself through her own actions and writings. She studied at the South Kensington Art School in London. After her studies, she began contributing essays to the periodicals, such as The Saturday Review. She studied and wrote on Art and became arts editor of The Academy journal. Married to Mark Pattison at this point, she signed her articles E. F. S. Pattison, adding the ‘S’ to signify her maiden name: Strong — to reflect an element of her independence from her husband. Emilia published on the subject of French Art and gained a reputation as a respectable historian and critic in her own right.

She was also interested in social reform and particularly in improving working conditions for women. She was a prominent figure in the Women’s Trade Union League, founded in 1874 and became its president in 1886. She wrote on the subject of women’s rights at work. In the book Women’s Work, she explores the idea that women are a feature of the modern workplace and that their low wages are damaging not just to women, but to men — who were having their wages undercut — too. She outlines her argument for a raise of women’s wages to be in line with those of men as follows:

It is only too clear that economic independence of women is very, very far from being accomplished…Even though a woman’s work may be as good and as rapid as a man’s, we have seen that her scale of payment is frequently inferior to his…it would seem, therefore, clearly to be in the interest of workman to promote legislation and such methods of organisation as will afford to women the same vantageground [sic] as men

Emilia examined many aspects of women’s work in her essays and opinion pieces, outlining issues of inequality and advocating for health reforms in various sectors — even speaking at the Trade Unions’ Congress. She advocated for women’s trade unionism and would continue to publish on this subject — as well as Fine Art — for the rest of her life. Emilia was also friends with Richard and Emmeline Pankhurst and supported their campaigns for women’s suffrage.

Header for an Article published in the North American Review, 1891.

Nothing has troubled me more than the weight of retribution which often falls on those who revolt against any point of prevailing order. Fly-page image from The Shrine of Death and Other Stories, 1886.

Hers are strange, allegorical tales, sometimes with a supernatural element, and a strong focus on morality and fate. They did not prove popular at the time, but these stories have recently been consolidated and republished for a new audience.

Considering this complex and varied legacy, it is a reductive to think of Emilia Dilke as simply the wife of MP Charles Dilke. Her many writing talents should have ensured her a more pronounced legacy than the one she currently holds. Compared to other women of the era, Emilia Dilke was privileged enough to be published and this has preserved many of her thoughts for the long-term. There is no doubt her work on women’s rights was an influence on other women, including her niece Gertrude Tuckwell, who advocated for women’s rights and women’s suffrage, becoming one of the first female magistrates in the UK. However, the lack of available archival material reflects a system of collecting that was very much centered on prominent men. 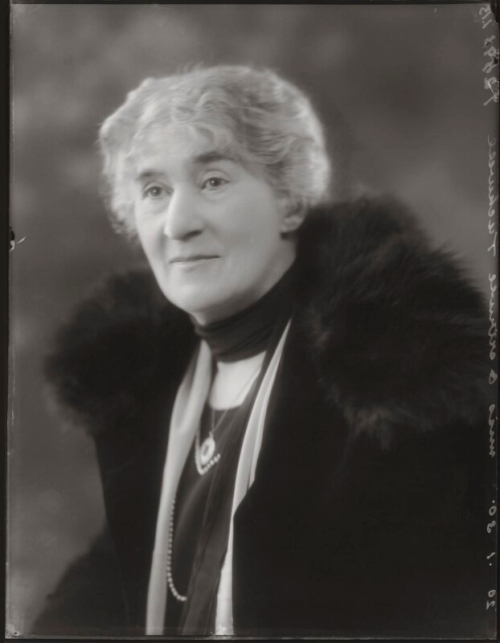 The centuries of male dominance in society are reflected in the contents of historic archive collections. The exclusion of women from professional careers means that essential institutional records are primarily authored by men on the actions of men. Therefore, women of the past with intellectual careers and contributions to various fields, often find themselves excluded from many historical records. Without admittance into the professional sphere their work has often been side-lined as that of personal ‘interests’ or ‘hobbies’, and therefore, historically not deemed worthy of formal preservation. This may help explain the disparity between Charles Dilke’s archival collections and Emilia’s.

As well as this, the ability to trace individuals is also more complex for some than it is for others. Barring titles, ranks and self-administered change, the majority of male names will remain the same throughout life, whereas women’s names often change through marriage. Archivists make efforts to discover women’s maiden names so that they can link individuals’ relative outputs together and to help establish a full biography of a person, but sometimes these names are never found. Emilia went by many names during her life, she had her married names, but also preferred to call herself Francis over Emilia at times. As well as this, she would sometimes include her maiden name in signatures and sometimes prefer to author articles with differing initials. Given this abundance of known names, one might see how articles of her authorship may not be linked together.

A combination of structural bias and incidental loss has inhibited the collection of women’s archives for generations, but there is change in the air. Archival institutions now make efforts to correct imbalances in their archival collections. The efforts to brings the many untold lives of women back into history was a major feature of second-wave feminism. As well as this, the internet has provided a means of connecting and tying women’s narratives together, enabling the writing of fuller biographies and giving more credence to their achievements.

The legacy of Emilia Francis Dilke has certainly benefitted from these changes, and many of her works have even been digitised and so can be accessed by a wider range of scholars. Likewise, contemporary women have made efforts to recover Emilia Dilke’s legacy, with Professor Hilary Fraser writing her Oxford Dictionary of National Biography entry, and Dr. Kali Israel writing a  contemporary feminist biography of Emilia Dilke that explores her accomplishments on her own terms. But such work has had to be accomplished without a comprehensive archival legacy for Emilia’s life and work. Given all this, one can see how easily other women have been lost to history, especially without the privilege of access to publishing that Emilia enjoyed. So many legacies have been reduced to a few scraps of paper and given our current advances in the field of archives, it is essential that we make an effort today to ensure that female archival legacies are fuller, broader, and most importantly, present in the future.

Posted by Callum McKean at 9:55 AM