by Helen Melody, Lead Curator of Contemporary Literary and Creative Archives. You can read more about the Library's existing collections of Joan Littlewood material online at Discovering Literature 20th Century, and more about the new acquisition in our latest press release.

I am delighted to announce that the Library has acquired the archive of Theatre Royal Stratford East and Theatre Workshop for the national collection. Comprising 140 boxes of scripts, correspondence, posters, flyers, audio visual material and props the archive provides a wonderful insight into the work of the award winning theatre and the highly innovative theatre company which was based there from 1953 until 1979.

Watch this film made by Theatre Royal Stratford East about the archive with Murray Melvin, actor, Theatre Workshop alumnus who for nearly thirty years was the honorary archivist of this collection, and my former colleague, Zoë Wilcox, to find out more.

The archive is an exciting addition the Library’s rich theatrical collections and fits particularly well with Joan Littlewood’s archive which we acquired in 2015. Joan Littlewood (1914-2002) was an internationally-renowned theatre and film director who has been described as ‘the mother of modern theatre’ for her radical vision and her innovative working methods. The archive documents her work at the theatre including a number of significant productions such as A Taste of Honey, The Hostage and Fings Ain’t Wot They Used T’be. It also includes some early material relating to the predecessor of Theatre Workshop, Theatre of Action (later known as Theatre Union) which was set up by Littlewood and her then husband, Ewan MacColl (1915-1989).

Theatre Royal Stratford East first opened its doors to the public in 1884 and the archive includes material from those early days, through Theatre Workshop to the tenures of the artistic directors, Ken Hill, Maxwell Shaw, Clare Venables, Philip Hedley and Kerry Michael, taking us right up to 2017. The depth and breadth of the archive mean that its contents will allow research on a wide range of subjects from agit prop theatre of the 1930s and the work of the dance artist and theorist, Rudolf Laban, through to Black and Asian theatre, and ideas of urban geography explored in Joan Littlewood’s Fun Palace project. With such a wide ranging archive it is not possible to describe everything here so I will just highlight some of the interesting items I’ve discovered so far.

Material from the earliest years of the theatre includes flyers for productions and a fragile pencil draft of a ballad entitled ‘Babes in the Wood’ which is believed to have been written by A.E. Abrahams in 1907. The archive also offers a fascinating insight into the workings of Theatre of Action/Theatre Union, the socialist theatre cooperative set up by Joan Littlewood and Ewan MacColl in Manchester in 1934. The company followed the principles of agit prop theatre that were developed in Russia following the Revolution. Agitprop used popular media such as theatre, literature and film to disseminate an explicitly political message and was performed in the street to audiences who might not go to traditional theatres. The archive includes scripts for a ‘Living Newspaper’ production from 1939, a reading list for the company and costume sketches. The company were trailblazers of new techniques such as their use of back projection for

MacColl’s adaptation of Hašek’s Good Soldier Schweik, the first time the effect was used in Britain. Excitingly the archive includes the original gobos used to create the distinctive effect. 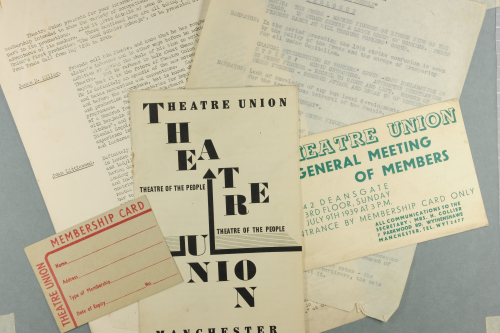 Theatre Union montage: selection of notes, programmes and other papers relating to Theatre Union’s work in the 1930s

Correspondence in the archive also points to the experimental nature of Theatre Workshop. Littlewood was very interested in the work of the dance and movement theorist, Rudolf Laban, and his first assistant in England, Jean Newlove, later become a member of the company and taught the them his methods. The archive contains a fascinating collection of letters from Laban to Newlove in which he outlines his theories that have since became an important foundation for dancers and actors alike. Letters also highlight how the socialist outlook of Theatre Workshop affected all aspects of its work as in this letter from Gerry Raffles to a prospective member of the company shows. 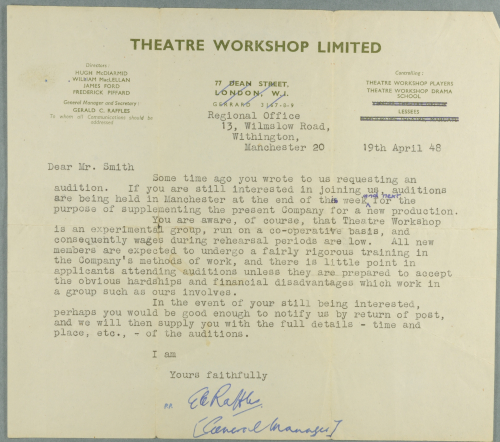 Raffles explained that “all new members are expected to undergo a fairly rigorous training in the Company’s methods of work, and there is little point in applicants attending auditions unless they are prepared to accept the obvious hardships and financial disadvantages which work in a group such as ours involves.”

As you can see the archive is particularly strong for anyone interested in Theatre Workshop and Joan Littlewood. One final thing to flag is the material relating to Oh What a Lovely War! Littlewood and the company devised the groundbreaking musical which was a satire on WW1 and war in general in line with their usual working practice. The archive includes a wide range of material on the subject from annotated scripts, lighting plots and costume lists to recordings of music for the production and photographs. One of the most interesting parts is a series of the cast notes that Littlewood wrote after each performance. These handwritten notes were pinned up on the wall providing detailed feedback for individual cast members as well as the ensemble as a whole – 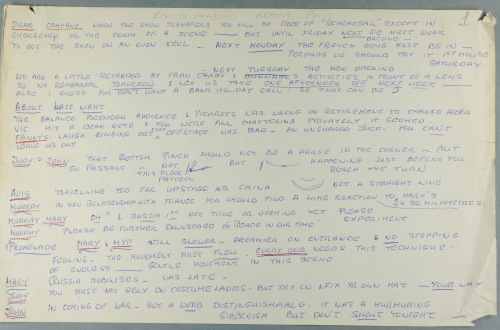 Theatrical innovation continued to be a cornerstone for the Theatre Royal Stratford East long after Littlewood’s departure in the 1970s. In particular the directorships of Philip Hedley and Kerry Michael saw the development of Black and Asian theatre with highly significant productions such as D’yer eat with your fingers (1998), a satirical state-of-the-nation production derived by a company that included Shobna Gulati, Syreti Kumar and Nina Wadia and directed by Indhu Rubasingham, and The Big Life (2005) the highly successful directorial debut of Clint Dyer, which became the first All Black British Musical in the West End. Other recent examples of innovation under Kerry Michael and documented in the archive include Home Theatre (2013 and 2015), which saw bespoke one person performances in the homes of members of the public and the musical, Tommy, which was performed by Deaf and Disabled artists from Ramps on the Moon in 2017.

I would like to use this blog to pay tribute to Murray Melvin, actor and Theatre Workshop alumnus who for nearly thirty years was the honorary archivist of this collection. Murray’s careful organisation, preservation and curation of the archive mean that it is in very good condition. He also played a key role in the development of the archive as a large number of items within it were donated by former members of the theatre company and their families. This means that the archive really is a collaborative record reflecting the myriad of different groups and individuals whose lives were interwoven with the theatre over the years. I think that the archive is a fitting tribute to all of them.

Posted by Eleanor Dickens at 10:55 AM