By Catherine Angerson, Curator of Modern Archives and Manuscripts. Manuscripts by Charlotte Brontë can be seen in two exhibitions at the British Library in London this summer: Unfinished Business: The Fight for Women’s Rights (until 1 August) and Miniature Books in our Treasures exhibition (until 12 September).

In Spring 2020, during the first national lockdowns in Scotland, England, Wales and Northern Ireland, the British Library asked children across the UK to make miniature books, inspired by the Library’s tiny treasures. One of these items was an issue of Blackwood’s Young Men’s Magazine, measuring only 5.2 by 3.7 centimetres, created by a young Charlotte Brontë and her brother Branwell in 1829. Like our young participants, the Brontë children made and bound their miniature books by hand. A small exhibition of Miniature Books celebrating this outreach project, is now open in our Treasures gallery in London. 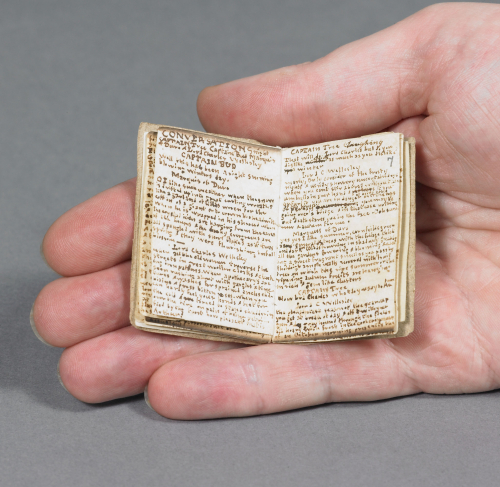 Blackwood’s Young Men’s Magazine and Charlotte Brontë’s handwritten tale, The Search After Happiness, are on display alongside other miniature books from the library’s historical collections and books created especially for the project by much-loved children’s authors and illustrators, including Axel Scheffler, Jacqueline Wilson and Joseph Coelho. In addition, the exhibition showcases some of the miniature books submitted by children in response to our lockdown callout, the first time contemporary works by children have been displayed in the Treasures gallery.

Charlotte and Branwell Brontë initially produced their own tiny magazines for the set of toy soldiers given to Branwell as a gift from their father Patrick for his ninth birthday in 1826. Branwell and his sisters, Charlotte, Emily and Anne, assigned personalities to the soldiers and this became the foundation of an imaginary world which would provide the settings and characters for the Brontës’ earliest literary creations. The precursor of Blackwood’s Young Men’s Magazine, which was largely written by Charlotte, was Branwell’s Blackwood’s Magazine, edited and written by Branwell from January to June 1829. The young editors added tables of contents and advertisements to each issue in imitation of contemporary magazines, such as Blackwood’s Edinburgh Magazine. 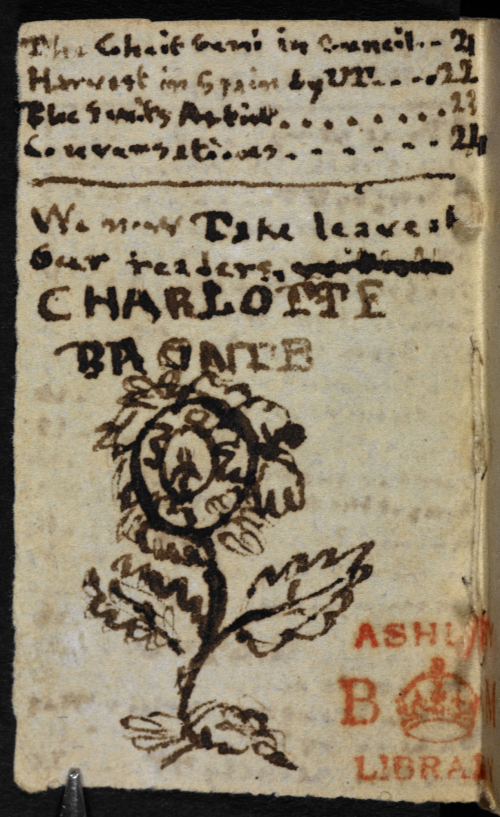 The page on display in Miniature Books is the final page of the 6th issue of Blackwood’s Young Men’s Magazine for December 1829, seen in the image above. The initials 'UT' shown here in the index stand for ‘Us Two’. Only Charlotte wrote her name at the back of the magazine, however, showing that the 13-year-old was the editor and author of most of the poems and stories in this issue. 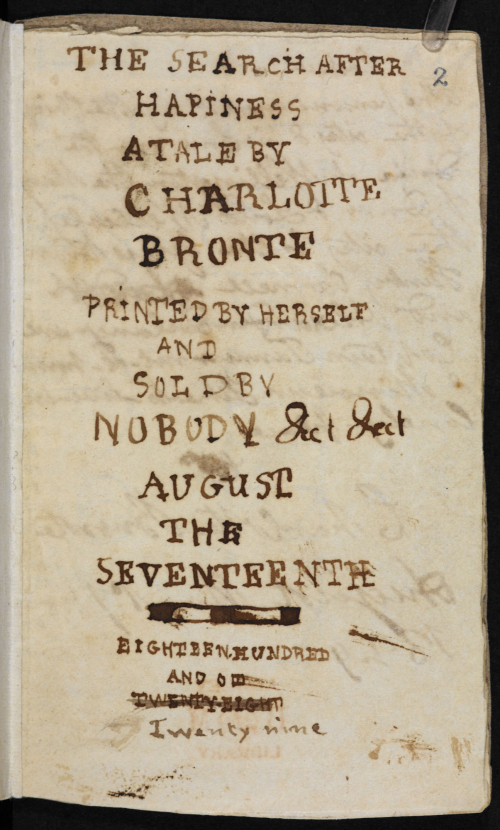 Charlotte Brontë’s tale, The Search After Happiness (1829), written in the same year as Blackwood’s, is set in the imaginary world of Glass Town. It tells the story of a man called Henry O’Donell who leaves his city to seek happiness and contentment in unfamiliar lands. Here Brontë imitates the title page of a printed book and makes a few mistakes while working by hand, including adding the wrong date (‘Twenty-eight’ instead of ‘Twenty nine’) and spelling ‘Hapiness’ with one ‘p’.

The tale is ‘PRINTED BY HERSELF AND SOLD BY NOBODY’, showing that the 13-year-old did not know how successful she would become as the author of Jane Eyre (1847). The manuscript of Brontë’s famous novel, submitted to the publisher Smith, Elder and Co in August 1847 under her pen name ‘Currer Bell’, is also on display this summer in Unfinished Business: The Fight for Women’s Rights.

You can view digital versions of Blackwood’s Young Men’s Magazine and The Search After Happiness on our Discovering Literature website and find many resources and activities relating to miniature books in Discovering Children’s Books.