by Greg Buzwell, Curator of Contemporary Literary and Creative Archives, and a co-curator of Unfinished Business: The Fight for Women's Rights. Emily Mary Osborn’s painting Nameless and Friendless is on loan from the Tate to the British Library for the exhibition, which runs until Sunday 1st August 2021.

At first glance there appears to be only one woman in Emily Mary Osborn’s painting Nameless and Friendless, a young lady in mourning clothes right at the centre of the composition. Look more closely though and you can see that there are actually three women portrayed in the picture, and each one reveals something about the position and status, or the lack thereof, of women in Victorian Britain. 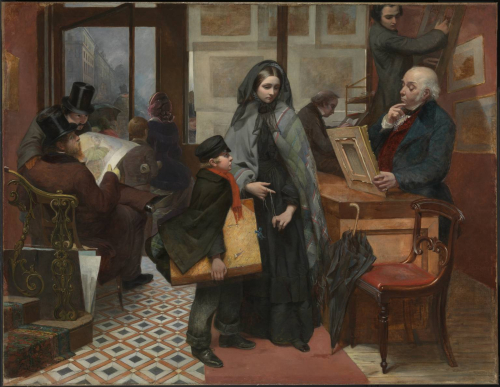 Emily Mary Osborn (1828 – 1925) was one of the most significant artists associated with the campaign for women’s rights in 19th-Century Britain. She was a member of the Society of Female Artists, an organisation founded in the mid-1850s with the aim of helping women artists to exhibit and sell their work. She was also a signatory to a petition presented to the Royal Academy of Arts in 1859 which argued for women to be allowed to attend the Royal Academy’s schools. Furthermore, she was a close associate of the feminist and artist Barbara Bodichon, a key campaigner behind the foundation in 1869 of Girton College, Cambridge - the first university college in England to educate women. Beyond her commitment towards the fight for women’s rights, however, Emily Mary Osborn was also highly successful in her chosen career. Her paintings sold, and they sold for good prices, which leads us back to Nameless and Friendless and its depiction of a less fortunate woman artist, placed centre-stage and literally surrounded by the male-dominated world of art and commerce.

Men, of whom there are many in the painting, hold all of the status and wield all of the power. The gallery owner’s gaze, for example, is condescending; the financial future of the woman before him is in his hands. If she fails to sell her paintings and sketches then prostitution could be her only realistic means of obtaining money for shelter and food. Meanwhile a young man on a ladder looks down at the picture with an air of barely concealed boredom. To the left of the composition two men in top hats eye up the young woman with lecherous glances and it is here that the second woman in the picture can be found. Prior to leering at the woman trying to sell her paintings they had been admiring a hand-coloured print of a scantily dressed female ballet dancer, their interest deriving more, one suspects, from her looks and bare legs than from any appreciation of the print’s artistic merit.

The third woman in the picture is —appropriately given her legal status, or lack thereof — even less noticeable. She has her back to the viewer and she is leaving the shop with her son. A married woman, comfortably off one assumes, but with her legal identity entirely subsumed by that of her husband, hence perhaps her literal facelessness. Until the passing of the Married Women’s Property Act in 1870 a wife had no independent existence under English law, and therefore no right to own property. In addition she had no right to enter into contracts separate from her husband, or should her marriage prove to be unhappy to sue for divorce or to fight for control and custody of her children.

Taken together these three depictions represent the fates of many women in 19th-century Britain: the single woman trying against the odds to make a living by her own endeavours; the sexualised object of male desire and the near-invisible wife and mother who has no legal existence independent from that of her husband.

Given that Emily Mary Osborn was herself a rare example of a commercially successful female artist the inspiration for Nameless and Friendless would appear to have its genesis in something other than her own experience. Many Victorian paintings took inspiration from literature and Mary Brunton’s novel Self-Control, first published in 1811 has been suggested as one possible source (the central character of the novel, Laura Montreville, attempts to sell her sketches in order to support her ailing father) but in her book Take Courage: Anne Brontë and the Art of Life the playwright and writer Samantha Ellis makes the case for Nameless and Friendless having been inspired by Anne Brontë’s novel The Tenant of Wildfell Hall (1848). If correct, and the way the painting matches events from the novel is compelling, then the painting takes on an added dimension, and one highlighting further obstacles faced by women in Victorian Britain. 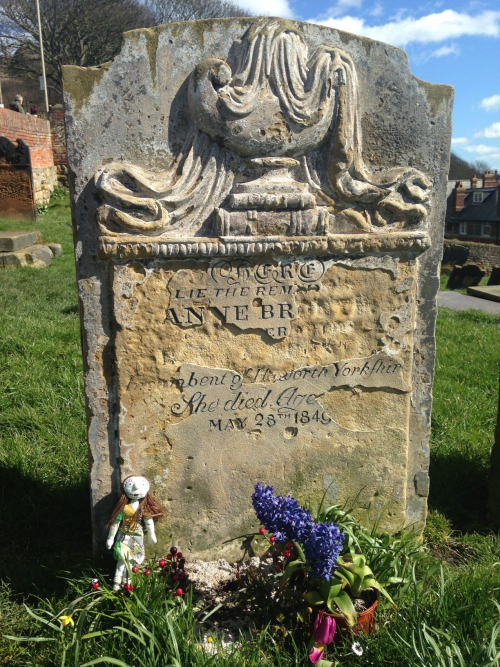 If Nameless and Friendless is inspired by The Tenant of Wildfell Hall then the young woman at the centre is Helen Graham, the boy with her is her son Arthur and, tellingly, the mourning clothes she is wearing are not genuine. At the point in the novel in which this scene occurs Helen Graham’s husband, the debauched and dissolute Arthur Huntingdon, is still very much alive. By leaving her husband, fleeing with her son and attempting to start a new life Helen has broken not only the letter of the law, but also social convention. Putting on a widow’s garb lends her an air of respectability but her real circumstances, should they become known, would leave her ostracised from society. Leaving one’s husband, no matter how brutal he may be, was far beyond the realms of what was socially acceptable in Victorian society. Further, and of relevance to the scene in Nameless and Friendless, even Helen’s paintings, along with the paints, brushes, palette knives, canvases and easels she uses to create them are all the property of her still-living husband in the eyes of the law.

To 21st-century eyes Anne Brontë is arguably the true feminist amongst the Brontë sisters. The Tenant of Wildfell Hall argues that submissive wives encourage male oppression, and that dissolute fathers raise sons who, likewise, display a similar lack of respect for women. While Charlotte and Emily created brooding, flawed and charismatic Byronic heroes in the characters of Mr Rochester and Heathcliff similar characteristics in Helen’s husband, Arthur Huntingdon, in The Tenant of Wildfell Hall are warning signs, a point made beautifully by Kate Beaton’s cartoon ‘Get me off this freaking moor’. 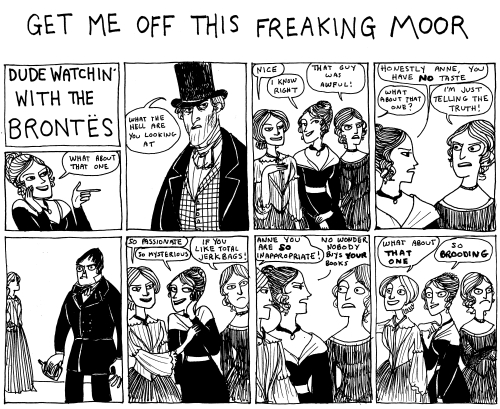 ‘Get me off this freaking moor’ © Kate Beaton. See more of Beaton's work on her website.

Whatever its inspiration Nameless and Friendless offers layer upon layer of insight into the status of women in Victorian Britain. Whether from the upper echelons of society, the newly emerging middle classes, or else from the traditional working classes, women were at the mercy, both literally and metaphorically, of men and the laws made by men.

The Tate Gallery page for Nameless and Friendless

Posted by Eleanor Dickens at 4:26 PM