by Zoe Louca-Richards, Curator of Modern Archives and Manuscrips (1600-1950). For more on Daphne Du Maurier’s work and life, see our article Daphne du Maurier - The British Library (bl.uk). For more on Rebecca see our article Nightmares, mirrors and possession in Daphne du Maurier's Rebecca. For more about our WW2 collections see Second World War - Modern Archives - The British Library (bl.uk). Both of these letters are now available to view in the Manuscripts Reading Room. For any enquiries, please contact MSS@bl.uk.

Two recent acquisitions made by the British Library shed further light on the life and work of English author Daphne Du Maurier. As well as commenting on her literary works, the letters discuss her views on filmic adaptations of her novels, and remark on her family and home life. 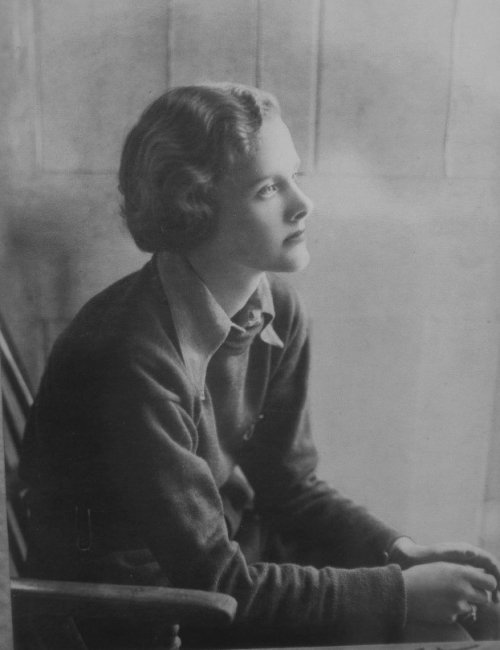 The first of the two acquisitions (Add MS 89461), is a letter written in 1942 to “Sargent Arnold”, a Prisoner of War being detained in Stalag Luft III, the German camp perhaps best known as the scene of the 1945 Great Escape. 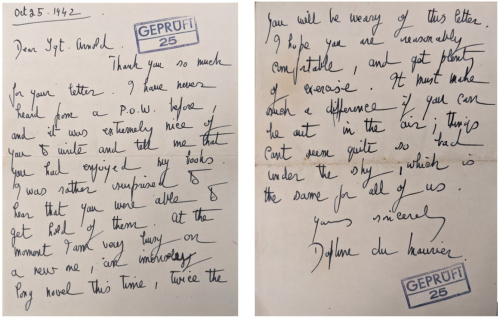 The five-page letter, reads as a light-hearted discussion between two acquaintances, perhaps offering Sgt. Arnold a welcome escape from his unfortunate situation. Du Maurier touches on matters including her home life, reading practices, and her most recent literary work, Hungry Hill (1943). She notes:

‘My husband is in the army, and I am living with my three small children (9-5-2) in a small     house in the West Country […] I have a hut where I keep picnic things, in a most     glorious position, you have to wade through bracken to get to it, and then the only things you see     are birds and butterflies […] I wish I could describe the country to you, but I     don’t know how much I am allowed to put in a letter’.

She continues to discuss books, noting that like Arnold she does not ‘want to read about the time in which we are living, but prefer to go back to the past’, explaining her recent return to Dickens and Shakespeare.  The letter also touches upon the Hollywood adaptations of both Rebecca and Frenchman’s Creek. Du Maurier was one of the first generations of authors to witness their novels adapted for screen. She clearly has a positive attitude towards the process in general, but less so of Hollywood itself, remarking of Frenchman’s Creek ‘it will be done in Hollywood I suppose, so I shall have no say in the matter. I’ve never been out there, and haven’t the slightest desire to go! The sort of life I should loathe.’ 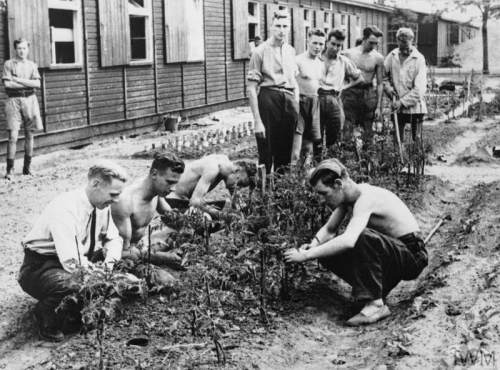 According to Adrian Gilbert’s POW: Allied Prisoners in Europe, 1939-1945 [1], life in Stalag Luft III, and German prisoner of war camps in general, was relatively “good”: good in comparison to other prisoner of war camps throughout history that is. Overcrowding, hunger, and depression were still key issues in Stalag Luft III. The bleak and unattractive landscape in which the camp was situated likely only exacerbating its oppressiveness. Many inmates took some solace and pleasure in gardening, as can be seen in the image above, which undoubtedly also helped alleviate some of the hunger. Prisoners also fashioned makeshift golf courses, and as evidenced by our letter, were able to access at least some books.

Du Maurier shows clear interest in the welfare and daily life of Sgt. Arnold throughout the letter. She closes her letter with interest and warmth:

‘If you should get this letter, will you let me know, and then I can send you things from     time to time. Books, if you are allowed them. Tell me what part of this country you come     from, and if you have any family […] I hope you are reasonably comfortable and get plenty     of exercise. It must make such a difference if you can be out in the air; things can’t seem     quite so bad under the sky’. 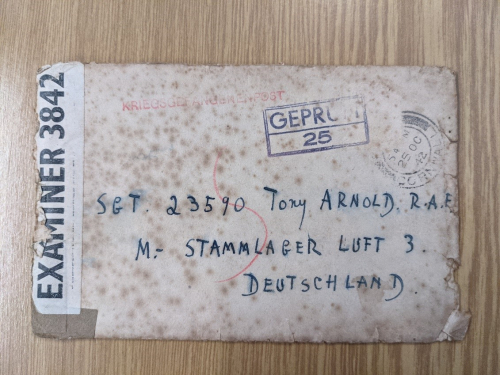 The second recent Du Maurier acquisition for the British Library is particularly interesting for its contribution towards the discussion of her remarkable 1938 novel Rebecca. Written in 1977 it addresses one of the most pervasive points of discussion regarding Du Maurier’s popular gothic thriller: why does the second Mrs de Winter not have a first name? 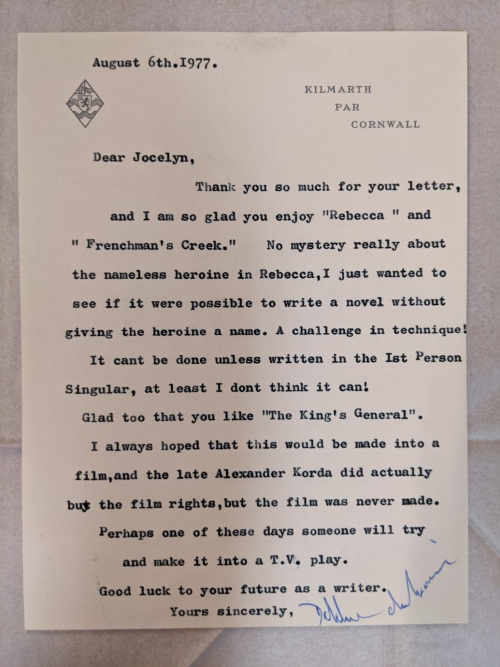 Many theories have arisen over the years as to why the protagonist of Rebecca remains nameless, whilst the eponymous Rebecca’s name echoes throughout the narrative. In this letter, addressed to “Jocelyn”, likely another fan of her work, Du Maurier notes clearly that the reason for the lack of name was that she simply wished to see if she could write a novel without naming its protagonist – a self-imposed literary challenge. In the process, Du Maurier notes ‘It can’t be done unless written in the 1st person Singular, at least I don’t think it can!’ 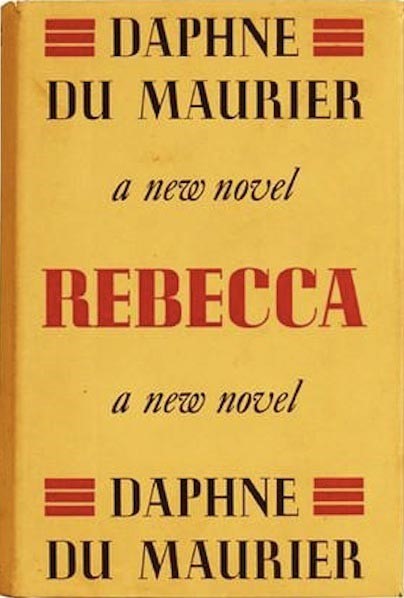 First time readers of Rebecca can be forgiven for not spotting that we never learn the narrators maiden name. Such is the subtlety and skill of Du Maurier’s handling of this interesting literary technique; a testament to her incredible aptitude for character development.

It took less than a year for Du Maurier to write Rebecca. Starting in mid-1937, the novel was conceived of and sketched out during Du Maurier’s time in Alexandria Egypt as an army wife, and completed in 1938 at Greyfriars in Fleet, Hampshire, after her husband was posted back to the barracks in Aldershot. Like many of her novels, Cornwall served as inspiration for the setting of Rebecca, in particular Menabilly, the Cornish house which Du Maurier fell in love with as a young adult, and would eventually come to live in.

Some of the key themes of Rebecca - belonging, jealousy, love, marriage, death, justice - have been linked to Du Maurier’s choice not to name the novels protagonist. Scholars and fans alike have also long speculated as to how much the second Mrs de Winter was a reflection of the author. In fact, Du Maurier’s son has noted that during the filming of Alfred Hitchcock’s 1940 adaptation of the book, whilst remaining true to the narrative the second Mrs de Winter remains anonymous in the script, she was nicknamed ‘Daphne’ on set. Du Maurier herself has too admitted that many elements of the narrative are based on facts.

Perhaps the most compelling, and arguable exciting, comparisons drawn between Du Maurier and the second Mrs de Winter, relates to Du Maurier’s jealousy towards her husband’s ex-lover Jan Ricardo. Du Maurier wasn’t directly acquainted with Ricardo, but knew of her through comments of others, and letters from Ricardo that her husband had kept. The letters were signed, with the ‘R’ of Ricardo being particularly distinctive. Jan, who moved among the glamorous elite, was described as popular, dark-haired, and attractive. The unfortunate similarities between Ricardo and Rebecca didn’t stop at the publication of Rebecca. In 1944, 6 years following, Jan Ricardo committed suicide.

As Lucie Armitt aptly puts it 'Rebecca is a story of ‘the woman with no name and the woman who has nothing and is nothing but her name.’[2] Regardless of Du Maurier’s intentions or the parallels one might draw with the authors own life, forfeiting a name for the second Mrs De Winter has several effects that cleverly enhance the reader experience. Perhaps most poignantly, its coupling with the first person tense enables the reader to substitute herself with the narrator, the second Mrs de Winter, more seamlessly.  The technique also textually mimics the overwhelming, oppressive, posthumous presence that Rebecca has over the narrative, and over the second Mrs de Winter. Despite being our main character, for the majority of the novel, the narrator’s entire existence, and certainly the only name we come to know her by, is anchored to her new husband, and his deceased first wife. Du Maurier is not the only writer to execute this technique to illustrate the subsidiary nature of a woman’s existence, The Yellow Wallpaper by Charlotte Perkins Gilman is another example.

The explanation given by Du Maurier in our letter is perhaps not as scandalous or personal as some scholars might hope for, but it in no way lessens the resulting effect of the second Mrs. de Winter’s anonymity.

Posted by Eleanor Dickens at 11:11 AM