Donald Michael Thomas (b. 1935) made his name as a writer when, in the early 1980s, his novel ‘The White Hotel’ scored a sudden success in the United States. With its psychedelic expedition into the subconscious, Freud and the Holocaust, and the vertiginous buckling and melting away of trust in its fickle narrator, the sensation it caused then spread back across the Atlantic to Britain.

Yet Thomas had been writing steadily and copiously for many years beforehand, as his archive, now fully catalogued and available in the Reading Rooms, records.  In his early career he considered himself mainly a poet: between the 1960s and the 1980s he filled thirty-five notebooks (preserved in photocopied form) with sketches and drafts of verse.  A home-made chart (Add MS 89363/9/6) chronicles appearances of his early poems in magazines and journals. 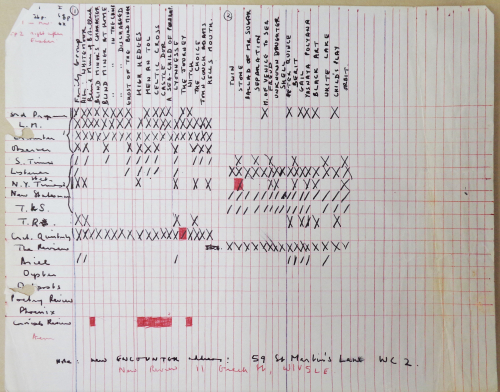 It was only at the end of the 1970s that Thomas turned to writing novels.  His first, ‘Birthstone’, set in his native Cornwall and already exploring his interest in the ideas of Sigmund Freud, is preserved in a first-edition copy (Add MS 89363/1/4) with annotations and amendments by the author.  Draft material and annotated typescripts and proofs record work on the other titles that then followed in quick succession, including ‘Russian Nights’, a sequence of novels which, though originally planned as a trilogy, expanded first into a quartet, then a quintet.

Russia is a recurring theme in Thomas’s work.  He has translated the poetry of Pushkin and Anna Akhmatova, and made radio adaptations of Russian literature.  In the late 1990s he embarked on a substantial biography of Alexander Solzhenitsyn, ‘A Century in his Life’, which won the Orwell Book Prize in 1999.  The archive contains a great deal of draft and research material for this book, as well as photographs and interview transcripts.

A more unusual series of papers (Add MS 89363/8) records one of the great frustrations of Thomas’s career: the seeming impossibility of making a film adaptation of ‘The White Hotel’, in spite of at least three separate attempts by different producers over the years.  The idea of a film first surfaced almost immediately after the novel’s overnight success, and at various junctures it seemed almost certain to be made.  But each time the project ran into difficulties, including of the legal variety (Thomas even found himself being dragged unwittingly into an American court case).  He relates the whole saga in his memoir ‘Bleak Hotel’ (2008), a typescript of which is also present in the archive (Add MS 89363/3/4-5). Thomas has retained much of his correspondence with publishers and well-known writers (Charles Causley, Stevie Smith, Peter Redgrove, and others), along with hundreds of messages from his sister Lois (Add MS 89363/9/18-24).  There are also dozens of family photographs (Add MS 89363/9/8-11), starting at the time of his parents’ courtship in Cornwall in the 1920s and continuing through his childhood and adult life.  Lively scenes at home in Truro, where he returned to live in the late 1980s, are preserved for posterity. Most of the snaps are captioned by Thomas himself: ‘Rugby with Dad’ – ‘I was always distant at visits to beach / sea’ – ‘Singing my face off’. Family and friends too are fondly epitheted. There is even a calendar entitled ‘Singing Thomas’s’, each month with a different picture of the family singing, drinking and generally making merry.  Thomas has still found time to write, however: the latest drafts and sketches in the archive (Add MS 89363/2/9-23) date from as recently as 2017. ‘Rugby with Dad’ in the field behind Thomas’s childhood home at Carnkie, near Redruth in Cornwall (Add Ms 89363/9/8)