Digitisation of manuscripts from the Blavatnik Honresfield Library

By Catherine Angerson, Curator of Modern Archives and Manuscripts.

The Blavatnik Honresfield Library is a collection of books and manuscripts of exceptional historical and literary importance formed by the Lancashire mill owner William Law (1836–1901) in the late 19th century and cared for by subsequent generations of the family until the sale of the collection in 2022. The collection includes manuscripts and rare editions of the work of Jane Austen, Robert Burns, Sir Walter Scott, the Brontë siblings, and Alfred, Lord Tennyson.

Honresfield House, just outside Littleborough near Rochdale, was where William Law lived with his brother Alfred, who inherited the collection after William’s death in 1901. It then passed to a nephew, the Conservative MP Sir Alfred Law (1860–1939). Selected scholars were granted access during the 1930s and transcriptions of several of the manuscripts were made, but the collection then largely disappeared from public view after the death of Alfred Law in 1939.

The Blavatnik Honresfield Library was purchased for the nation in 2022 by the Friends of the National Libraries with the support of the Blavatnik Family Foundation, the National Heritage Memorial Fund and many other generous supporters. The collection has been shared between cultural heritage institutions in the UK who are all committed to making the items in their care publically accessible.

The British Library was one of the beneficiaries, receiving 102 printed books, four manuscript items, and the William Maskell chapbook collection. The manuscript items have now been digitised and you can access the images by following the links below. 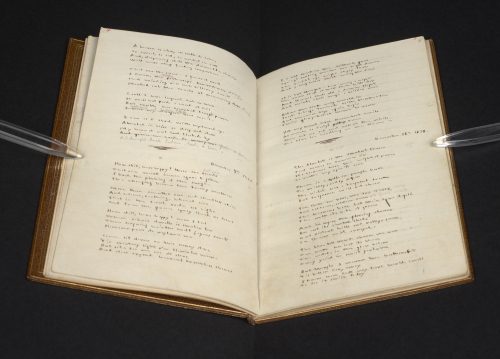 One of the highlights of the Blavatnik Honresfield Library is the notebook of Emily Brontë’s poems (Add MS 89488) which she kept between 1844 and 1846. Few of Emily Brontë’s literary manuscripts survive and the notebook is a fascinating record of her creative process. Brontë transcribed neat copies of 31 of her own poems into this notebook, recording the date of original composition next to each.

The first poem, ‘Loud without the wind was roaring’, is dated 11 November 1838 when Emily was 20. She composed the final poem, ‘No Coward Soul is Mine’, on 2 January 1846 at the age of 27. Some of the poems include further revisions in the hand of her sister Charlotte. Beneath the poem ‘How beautiful the earth is still’ of 2 June 1845, pictured below, Charlotte has written, ‘Never was better stuff penned’, in the miniature script shared by both sisters. 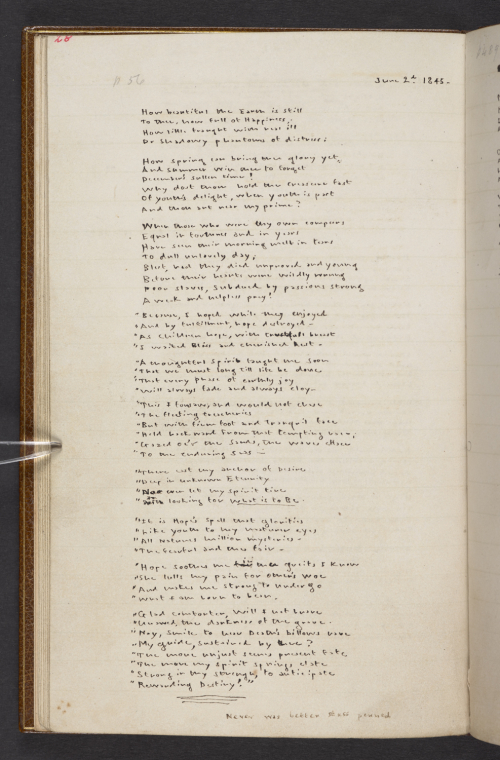 The notebook is the source for 15 of the 21 of Emily Brontë’s poems selected for Poems by Currer, Ellis, and Acton Bell (1846). The other six poems came from Emily’s ‘Gondal Poems’ notebook which she kept at the same time. Emily Brontë’s own signed copy of Poems (1846) is also among the treasures of the Blavatnik Honresfield Library.

Another treasure allocated to the British Library is a miniature book by Charlotte Brontë titled, 'Characters of the Celebrated Men of the Present Time by Captain Tree' (Add MS 89486). The tiny book, created by Charlotte when she was just 13 years old, is one of seven early Brontë manuscripts now jointly owned by the British Library, the Brontë Parsonage Museum and the Brotherton Library at the University of Leeds. The book is narrated by Captain Tree, one of Charlotte’s childhood pen names. It consists of ten chapters that feature ‘Celebrated Men’ such as the Duke of Wellington, Lord Charles Wellesley, Captain Bud and Young Man Naughty. These figures were drawn from real life as well as from the fictional world of Glass Town. The Glass Town Federation was a complex fantasy land created by Charlotte and her siblings Branwell, Emily and Anne. 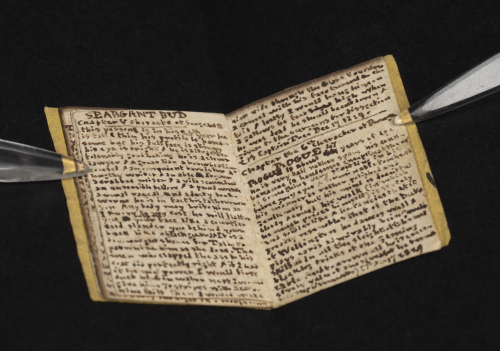 The book measures a tiny 5 x 3.7 cm, the size of a small matchbox. The digital images allow us to zoom in on Brontë’s tiny script and to examine the pages of the manuscript in detail. The pages are slightly uneven in size. This is because Charlotte cut the paper by hand and sewed the pages together using a needle and thread, and the book is still bound in its original yellow sugar paper cover.

The manuscript items allocated to the British Library also include a letter dated 10 November 1847 from Charlotte Brontë to William Smith Williams of Smith, Elder & Co., the publisher of Jane Eyre (1847) (Add MS 89487). In this letter, Brontë (using her pen name ‘C. Bell’) complains about the ‘exhausting delay and procrastination’ that her sisters Emily (‘Ellis’) and Anne (‘Acton’) have had to endure in the publication of their novels by Thomas Newby. Emily Brontë’s only novel Wuthering Heights and Anne Brontë’s first novel Agnes Grey were both published by Newby in December 1847 shortly after Charlotte wrote this letter.

The manuscripts have been digitised in full and images can be accessed via the archives and manuscripts catalogue and through the links in this blogpost. The printed items are described in the main catalogue and can be identified by the shelfmark prefix ‘Hon’. See our new collection guide for further details.

A small selection of books and manuscripts from the Blavatnik Honresfield Library is currently on display in the Treasures Gallery at the British Library in London (until 19 February 2023). The display includes a leaf from Walter Scott’s Kenilworth manuscript, the letter from Charlotte Brontë to WS Williams, Emily Brontë’s poetry notebook together with her own copy of Poems (1846), and two of the chapbooks from the Maskell collection.

We are delighted to be working with the Brontë Parsonage Museum and the Brotherton Library to make the Brontë material available to new audiences (online and in an exhibition) over the coming months and years. 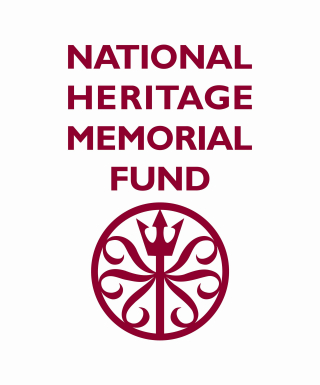