Bringing a Liverpool Heart to Moliére

by Deborah Dawkin, currently working on a collaborative AHRC PHD project with UCL and the British Library focussing on the archive of Ibsen translator Michael Meyer.

Last week the British Library had the pleasure of hosting the 2016 Sebald Lecture, given this year by Roger McGough. His subject was the translating and adaptation of Molière’s plays, including Tartuffe (2008), The Hypochondriac (2009) and The Misathrope (2013) for the English Touring Theatre. Unsurprisingly perhaps, given McGough’s renowned skills in performance and public speaking this was anything but a dry lecture: we were treated to a vibrant and entertaining as well as thought provoking insight into the process of translating seventeenth century French comedy for the contemporary British theatre – one which highlighted the difference between the requirements of theatre translation and literary translation – the difference of creating a text which “preserves history” and one that breathes new life into a play while at the same time respecting the original writer’s message and intentions. 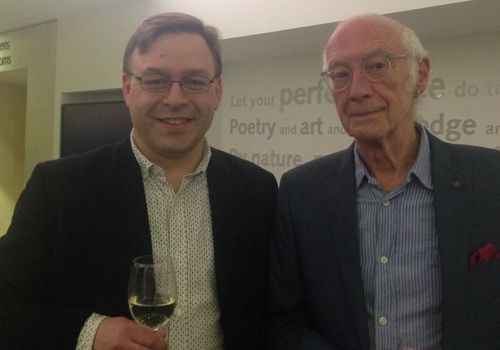 Roger McGough (right) who gave this year's Sebald Lecture together with Duncan Large, Academic Director of the BCLT who chaired the event.

The Sebald lecture is an important date on the British Library calendar for all those interested in international literature and translation. Sponsored by the British Centre for Literary Translation. The Sebald Lecture is given annually on an aspect of literature in translation. The event is named after the acclaimed German writer WG Sebald (1944-2001), whose novels and essays include The Emigrants, The Rings of Saturn, Austerlitz and On the Natural History of Destruction. Despite writing almost exclusively in German he lived in the UK, lecturing in German at University of East Anglia where he founded the British Centre for Literary Translation in 1989.

In true story teller’s style McGough began at the beginning, and took us back in time to his first lessons in French at the Irish Catholic Brothers school for boys in Liverpool, where the tyrannical Brother O'Shea used the fear of the strap (specially sewn and crafted by the local nuns) to get his students to learn their verbs and vocabulary. Despite this unpromising start McGough went on to study French as well as Geography at the University of Hull. If the audience were expecting then to hear how McGough had developed an undying passion for French literature and language, they were disappointed. Instead we were regaled with a story in which McGough’s accent was so bad (having missed the French Exchange programme due to a family bereavement) that he was discretely removed from the aural exam. Slightly disingenuously - as he worked as a French teacher in the sixties - McGough left us with the impression that his French language skills were sketchy at best. But perhaps McGough wanted emphasise the point that these are not literal or academic translations, but adaptations designed to bring the spirit of Moliére to a contemporary audience: Molière with a "Liverpool heartbeat".

McGough was first approached in 2008 by Gemma Bodinetz to create a translation/adaptation of Tartuffe for her production with the English Touring Theatre. He was initially uncertain about undertaking the task, but promised to give it some thought. Taking several translations of Tartuffe with him on a Saga cruise (as an entertainer he hastened to tell us, not a guest) he read them on the journey to the Bay of Biscay. This allowed McGough to enter the play without the struggle of reading complex 17th century French verse, and to allow the characters and plot to inhabit him; to set his imagination free. By the time he had returned to the shores of the UK, McGough had started to write his version. Now McGough, concerned that he should be true to Molière’s intentions, turned to Molière’s original text, to check his own version against it, thus taking the script to a new level.

Anyone who has read McGough’s translations of Moliere, or had the pleasure of attending a performance, will be struck by their dexterity and their sharp, playful wit, and their cleverness in offering us a contemporary text, with contemporary references, yet never quite losing the link back to 17th century France.

This event was supported by Arts Council England and Writers’ Centre Norwich.

Past Sebald Lectures can be heard in full on the British Centre for Literary Translation website.