by D-M Withers, Research Fellow at the University of Sussex and collaborator on the Business of Women's Words Project, which explores the dramatic story of the feminist publishing revolution that unfolded during the UK WomenŌĆÖs Liberation Movement of the 1970s and 80s. The exhibition Unfinished Business: The Fight for Women's Rights -- which includes material from the Callil Archive and elsewhere, is now open at the British Library.

"I remember, when I was still writing the PhD, going to CarmenŌĆÖs home in Chelsea, the little jewel of a flat with these two magnificent white cats kind of, stalking around, you know, scrutinising us. I remember it being painted deep lime green [ŌĆ”] like a jewel, but that could be a misremembering." [1]

Virago author Barbara TaylorŌĆÖs memory of visiting Carmen CallilŌĆÖs flat in the late 70s is one of many references to CallilŌĆÖs cats that litter the feminist publisherŌĆÖs history. In her recently published memoir A Bite of the Apple, Lennie Goodings ŌĆō clearly not a cat person ŌĆō offers another account of visiting CallilŌĆÖs home for a Virago meeting. Upon entering the ŌĆśjewelŌĆÖ like flat, John or William ŌĆō one of two grey half Siameses given to Carmen as kittens by Germaine Greer and named after two ŌĆślovely menŌĆÖ she had worked with in her early publishing career ŌĆō boldly jumped on GoodingsŌĆÖs shoulder, and proceeded to curl around her neck. ŌĆśI protested weaklyŌĆÖ, writes Goodings, ŌĆśuntil it was removed by Carmen, who declared that not liking cats ŌĆ£showed a defect in your personality.ŌĆØ [2]

Many photographic portraits of Callil and her feline companion exist from the 70s and 80s, and were often used as illustration for newspaper and magazine features. I encountered these sources while working on the Leverhulme Trust-funded project The Business of WomenŌĆÖs Words: Purpose and Profit in Feminist Publishing, a partnership between the British Library, the University of Sussex and the University of Cambridge. Callil was profiled alongside several other ŌĆśgo it aloneŌĆÖ entrepreneurs, including a freelance management consultant, wine exporters and a restauranteur, in a feature for one of the final issues of glossy lifestyle magazine Nova that ran between 1965-75. Callil explained that the entrepreneurial route was attractive because she ŌĆśhad the wrong temperament to work for an employer, I think [ŌĆ”] I just cannot tread the daily tightrope of compromise and gritting your teeth.ŌĆÖ [3] In a full-page portrait of Callil and her fabulous white Persian Mary ŌĆō named after Mary Wollstonecraft (who else?) ŌĆō taken by John Ferrara, both figures pose seductively, shooting forth an arresting look that doubles up the feminine gaze for the viewer, a celebration of fur, feminism and self-possession.

Joan BakewellŌĆÖs 1980 article ŌĆśThe feminist publisherŌĆÖ, published in Illustrated London News, offers a different configuration [4]. Here Callil is sat at home, crossed legged, adorned with knee-length boots that show she means business. Behind her is a desk strewn with books. In her arms is one of her grey half Siamese cats that, as soon as the shutter clicks, will likely struggle from her loving grasp, avoiding the burn of a cigarette held imperiously in the publisherŌĆÖs right hand. The restless energy captured in the image seems appropriate for a domestic portrait in which the feminine interior, the private home, has been faced out, now transformed into a public space of work.

An article for the Telegraph Weekend Magazine from 1989 is more playful. We are introduced to two new additions to CallilŌĆÖs household, sourced from a Sussex farm, the six-month old Augusta or ŌĆśGusŌĆÖ, named after friend Gus Skidelsky who bequeathed the kittens to Carmen, and Jessica or ŌĆśJessŌĆÖ, named after CarmenŌĆÖs godchild, the daughter of the influential literary agent, Deborah Rogers. The article describes how the cats conquer ŌĆśthe 15-foot-high fence, entangled with greeneryŌĆÖ that frames CallilŌĆÖs London garden ŌĆświth ease. ŌĆ£I wish I could,ŌĆØ she smiles. ŌĆ£I locked myself out last week. I tried to scale the fence from a neighbourŌĆÖs garden but fell off and bruised myself.ŌĆØŌĆÖ [5] The accompanying photograph is warm, with a comedic touch: Callil, wearing a dashing multi-coloured, pin-striped blouse, holds a tortoiseshell with white paws barely outstripping its kittenhood in her palms; her face reveals an irrepressible smile, the cat looks askance from the camera, stuck out tongue, insubordinate, naughty.

These photographs evoke the fascination with feline imagery in the work of twentieth century female surrealists Maya Deren, Leonor Fini and Leonora Carrington (CarringtonŌĆÖs Seventh Horse & Other Tales and The Hearing Trumpet were of course recovered by Virago as Modern Classics, in 1989 and 1991 respectively). In the portraits, cats become CallilŌĆÖs familiars, their co-presence conducting the power of feminine independence, metamorphic mischief, sensuality and self-sufficiency. The surrealist imagery, in CallilŌĆÖs case, is not of the subversive artist, but the businesswoman: the self-styled entrepreneur who chose comradeship with a host of feline friends, and to do business with other women.

In the Virago papers held by the British Library, we sometimes catch glimpses of CallilŌĆÖs cats in her correspondence with publishing colleagues. Cat-lover Paul Berry, the literary executor of Winifred Holtby and Vera Brittain, wrote to Callil to express his delight upon reading about her cats in an article published in the Sunday Telegraph. Callil responded, with exuberance: ŌĆśI canŌĆÖt believe I never told you I had three cats: my best friends for the last twelve years; you must meet them one day, each a remarkable personality.ŌĆÖ [6] Cats were also important to an author who kickstarted the Virago Modern Classics (VMC), Antonia White. White wrote two childrenŌĆÖs books about her cats, Minka and Curdy (republished by Virago in 1992) and Living with Minka and Curdy. White was one of a number of living authors Virago published in the VMC that Callil befriended. Given their common interest in feline companionship, it seems likely that cats ŌĆō and Catholicism ŌĆō animated their conversations.

If, like me, you have a strange fascination with the who, what, where and why of other peopleŌĆÖs grocery shopping, youŌĆÖll love the extensive collection of receipts and invoices held in Carmen CallilŌĆÖs archives at the British Library. Among a host of other things (including the companies Virago used to print their books, where they sourced images for the VMC, membership receipts for the London Library, the Chinese restaurants they regularly frequented, the calculators they used in the office, among others) youŌĆÖll learn that in the late 70s, Callil bulk-bought her groceries from the wholesaler, Makro [7]. Alongside food and various items for the Virago office ŌĆō circled or marked with an asterix to ensure specific items were included in the companyŌĆÖs accounts ŌĆō are entries for tins of cat food and litter! A busy woman, such as she was, very wisely did not get bogged down by the regular need to shop for lifeŌĆÖs essentials. Bulk-buying was a far more efficient choice. To close this feline circuit, I want to share one, further, Virago-themed cat story. As an undergraduate at the end of the twentieth century, I studied English Literature at Swansea University, where I had the good fortune to be taught by Professor Ann Heilmann. I was captivated by AnnŌĆÖs teaching and the source material she presented to us, especially for her course on Victorian Women Writers, which included books by many authors she had first encountered ŌĆō Mary Elizabeth Braddon and the ŌĆśNew WomenŌĆÖ Olive Schreiner, George Egerton, Sarah Grand ŌĆō through ViragoŌĆÖs Modern Classics. Ann is also a cat lover (when I was studying at Swansea, she had a cat called Sweetie, named after the Jane Campion film). Fast forward twenty or so years: Ann now has two cats. Their names are Angelica and Diavolo ŌĆō inspired by the gender bending ŌĆśHeavenly TwinsŌĆÖ in Sarah GrandŌĆÖs 1893 novel (incidentally, Sarah Grand ŌĆō whose The Beth Book was a VMC, and the biography Darling Madame: Sarah Grand and Devoted Friend by Gillian Kersley was published by Virago in 1983 ŌĆō also chose to be photographed with her cats). 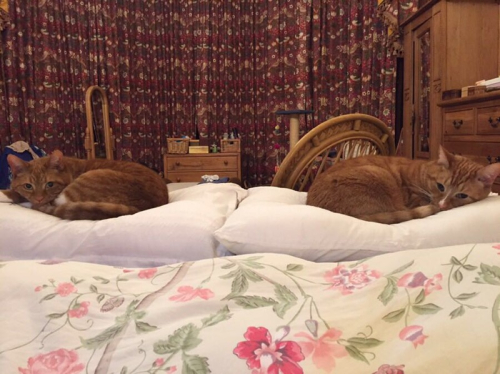 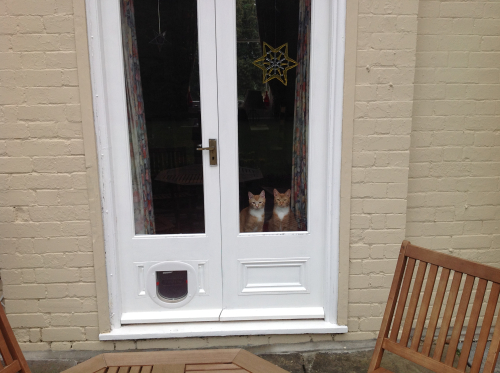 Angelica and Diavolo at work and play

If it wasnŌĆÖt for Virago, AnnŌĆÖs cats would not be named after characters in The Heavenly Twins because her contact with Grand came through ViragoŌĆÖs reprint publishing. Without AnnŌĆÖs academic study of niche Victorian women writers, in turn, I never would have studied them as an undergraduate, an experience which indelibly shaped my relationship to feminism. Ultimately, this is a story about how feminist knowledge is transmitted across generations, visible in the delicate details, of who we can name our favourite companions after. Callil after Mary Wollstonecraft, Ann the fictional characters popularised by a writer Virago plucked from obscurity and republished. Cats, as home-working companions, intrude upon ViragoŌĆÖs history in many different ways; their feline influence extends in a web of associations and references that give meaning to feminist life. 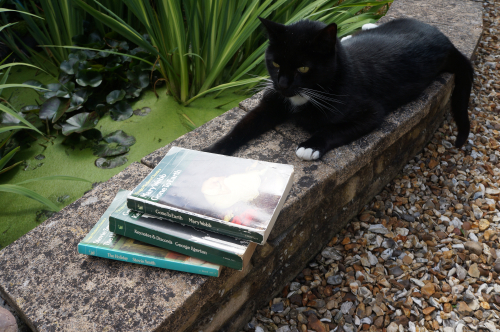 My own cat, Sanjay, looking over collection of Virago Modern Classics.

In recent years, CallilŌĆÖs public companions are more likely be dogs rather than cats (proof, if ever it was needed, that one neednŌĆÖt be forced to choose in life between such things). Indeed, you can hear current companion Effie barking enthusiastically in this episode of Backlisted, where Callil discusses The Soul of Kindness by Elizabeth Taylor, one of her favourite novels. Discernible, too, is Callil barking back with fervour: ŌĆśShut. Up. Effie!ŌĆÖ Given my own penchant for cats, though, I will close this short article with CallilŌĆÖs thoughts on these remarkable creatures. ŌĆśI like them simply because they are not human. And I really love the shapes they make. My old cat was like a walking painting.ŌĆÖ [8]

Thank you to Ann Heilmann for feedback on this article and for the photograph of Angelica and Diavolo. Thanks also to Eleanor Dickens of the British Library for supporting my research into the Callil archives during this project. Finally, my thanks to Carmen Callil for article feedback and permission to quote from her letter to Paul Berry.

[2] Lennie Goodings, A Bite of the Apple: A Life With Books, Writers and Virago, Oxford: Oxford University Press, 42.