From Queen to King in the Netherlands 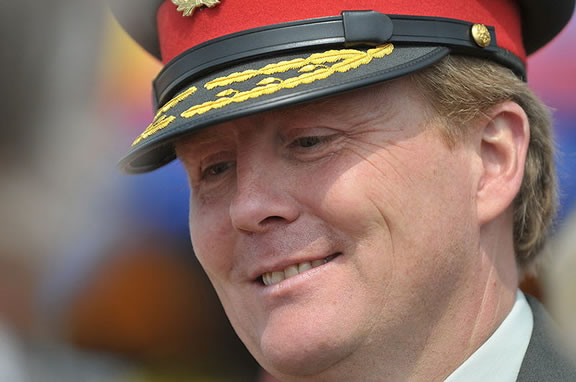 Queen Beatrix was the eighth monarch since the Netherlands became a Kingdom in 1813 and the fourth queen since Princes Emma (1858-1934) acted as regent for her daughter Wilhelmina, following the death of her husband King William III in 1890.

The site Memory of  the Netherlands has some great content on the investitures of Dutch kings and queens.

Succession in the Kingdom of the Netherlands follows either death or abdication and is laid down in the Dutch Constitution. When Queen Beatrix signed the instrument of abdication in the Royal Palace on the Dam in Amsterdam, the Prince of Orange Willem-Alexander became King Willem-Alexander. A coronation was therefore not needed. Instead, the King took the oath in a special assembly of Parliament in the New Church , next door to the Royal Palace, in the presence of the Dutch government and a great many guests.

Later that day the royal party made a boat tour on the IJ Pool of Amsterdam passing by the brand new EYE building, the Dutch equivalent of the BFI.

In London the Dutch Centre in the age-old Dutch Church at Austin Friars (1550) opened its doors officially for the first time for a party in the presence of the Dutch Ambassador to the United Kingdom, Ms Laetitia van den Assum.

It feels somewhat strange having a king as head of state, after more than a century of queens. But hey, when Willem-Alexander abdicates in a few decades we’ll have a queen again.