Tirant lo Blanc, the chivalric adventures of Sir Tirant the White, by Joanot Martorell and Joan Galba, was first printed in Valencia by Nicolaus Spindeler in 1490.

The works with which it is most often compared are Amadis of Gaul and Don Quixote. Both were best-sellers in their time: Tirant, in contrast, has grown from early obscurity to the status of a twenty-first-century classic.

Although it attained a broader significance, Don Quixote began life as a satire on Alonso Quijano, a naïve and gullible reader of chivalric romances such as Amadis. As moralists and aesthetes of advanced tastes agreed, the Amadis stories were full of blood and guts and easy sex, and so vitiated by a lack of verisimilitude that no sophisticated reader could stomach them. Cervantes, if we can take the priest and barber who scrutinise Quijano’s library as spokesmen for their creator, praised Tirant for its realism: ‘Here knights eat and sleep, and die in their beds’.

Had Huizinga known the Tirant, he might well have taken it as symptomatic of the ‘Autumn of the Middle Ages’. Tirant perpetuates the battle scenes, long speeches and courtly display typical of the romances of chivalry since the days of Chrétien de Troyes; but other elements take it beyond its genre to a more modern spirit.  Critics often point to its humour (in contrast to the poker-faced musclemen of romance), and its sexually forward female characters of all ages.

Academic readers of Tirant have paid special attention to its intertextuality: Martorell quotes from pretty well all the Catalan prose writers who preceded him. More down-to-earth readers find him a good read: a former student of mine told me she read Tirant to her children.

The initial chapters of Tirant are modelled on the legend of knight-turned-hermit Guy of Warwick,  a French text of which Martorell could have encountered when he participated in a tournament at the English court of Henry VI.

There is a manuscript fragment of Tirant, but the earliest complete witness is the Spindeler edition.  Only three copies are known, one of them in the Grenville library in the BL. All three were brought together for the first time at an exhibition in Valencia in 2010, and collations made there have led to provisional assessments of the relationship between them.

Tirant was not however a best-seller. There were Spanish and Italian translations in 1511 and 1538 respectively.  The Catalan original was published only in academic editions up to 1920.  Capdevila’s paperback edition of 1924 opened up the work to a much broader audience. Vicente Aranda filmed it in 2006. Rosenthal’s English version came out in 1984 to great acclaim. In the age of survey courses on Great Novels in History or television series such as 'Game of Thrones' Tirant’s time has come again. 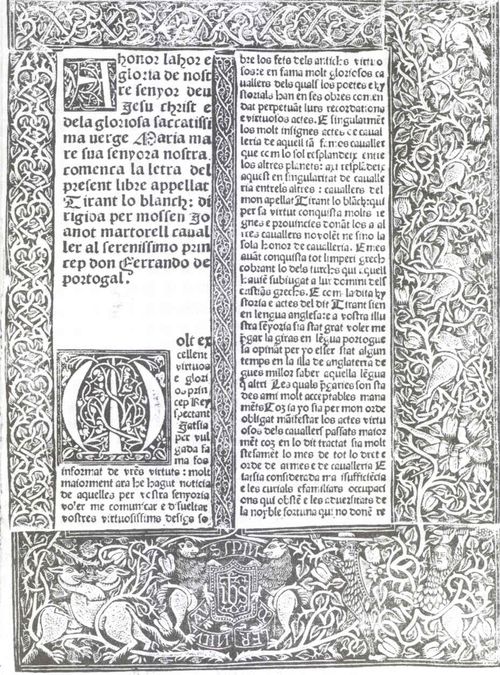