Make your own anti-soviet propaganda!

Looking for material in the British Library's Russian collections that could be shown in our current exhibition Propaganda: Power and Persuasion, I found a small collection of anti-Soviet propaganda  purchased by the Library in 1978 [British Library shelfmark HS.74/2168].

The collection consists of about 50 items published in the 1950s by the Narodno-trudovoi Soiuz (The National Alliance of Russian Solidarists)  a Russian far-right anticommunist organization founded in 1930 by a group of young Russian White émigrés  in Belgrade. The organization also set up a radio station called ‘Radio Free Russia’; during the Cold War its programmes were broadcast from West Germany to the Soviet-occupied eastern zone until the West German government, responding to pressure from the Soviet government, shut the station down.

The NTS actively sent out propaganda leaflets via air balloons and other means, including direct mail. Messages containing anti-Stalinist slogans and the NTS’s political programme were printed on leaflets, handkerchiefs, fake roubles, false books, etc. to be smuggled into the Soviet Union.
For example, in our collection we have a leaflet addressed to the entire ‘population of the country’ with an image of a hundred-rouble note on the reverse, which of course could not be taken for a real banknote. Other items are presented as handwritten letters to a friend, and some are really small pieces – about the size of a matchbox - with graphic images and some text on them. It is difficult to say whether these tricks and others, such as a fake newspaper intended to imitate the established Soviet newspaper, Literaturnaia Gazeta (The Literary Newspaper), really helped to smuggle more material into the USSR. 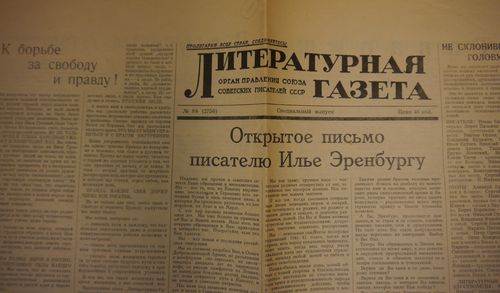 In my view, the most interesting items in this collection are two templates which could be used to produce more copies of anti-Soviet propaganda. The instructions for doing this are not exactly simple: “Take 22 teaspoons of water, 5 teaspoons of potato starch, 8 teaspoons of real ink, and 2 teaspoons of glycerine. Mix all the ingredients very well and heat slowly till the mixture becomes fairly thick. Using a small piece of wood smoothed by fabric or rubber, rub this substance into paper through this template. Rinse and dry the template after use”. 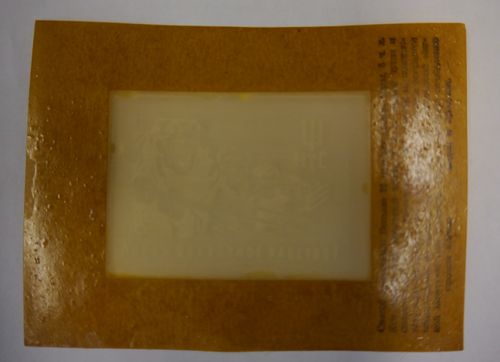 Make your own Propaganda! One of the NTS templates

I’m afraid that even those who have a valid reader’s ticket for the British Library  won’t be able to try this out. But the collection will soon go undergo conservation treatment and will be available to consult in the reading rooms in 2014.