The yogi lived ‘like an anchorite’ in a cave in Anjediva and kept silent as a penance. The text explains that there are two types of yogi (or sannyasi): ‘those who shave their heads and are contemplatives, and others who let their hair grow down to their knees and wear it tied around the head like a mane and do extraordinary penances’.

This particular yogi was a figure of great gravity; he was naked, with his hair covered in ashes, and in his right hand he held a bundle of peacock feathers and held his left hand closed and raised behind his head in an act of penance he had performed since childhood. 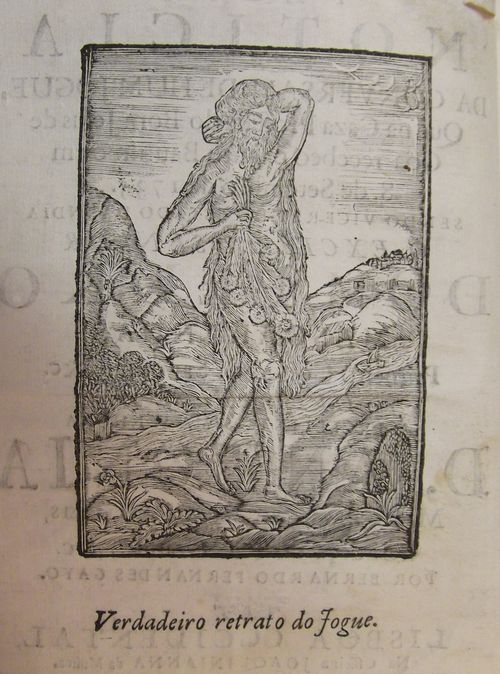 The sympathetic treatment of the yogi is notable, and must be due in part to the fact that the Portuguese saw in him a parallel with the classical philosophers Socrates and Seneca, with whom he is explicitly compared. His contempt for worldly things and his analogy to a desert father chimed with a Christian culture imbued with contemptus mundi and populated by flagellants.

But the yogi’s greatest act of wisdom, in the eyes of the Portuguese, was surely that he converted to Catholicism.

He was taken before a Jesuit in the viceregal palace and entered into discussion, with the aid of an interpreter. After many debates he was won over and was baptised with the name of Pedro, in honour of the Viceroy, Dom Pedro Mascarenhas, his godfather, who marked the occasion with a banquet.

We must not deduce from this account that Portuguese India in the 18th century was a forerunner of multiculturalism. After all, the author sets out to prove that the Gospel is superior to 'Paganism'. But when we bear in mind that the Inquisition was not to be brought under state control until the era of the Marquês de Pombal in 1774, and that the Portuguese language bequeathed us the term auto da fe, this pamphlet is a reminder of a moment of kindlier interfaith dialogue.