A Dingy Corner of British Hispanism: Samuel Pepys and Spanish

With the latest part of the BBC’s running adaptation of Pepys’ Diary on the radio this week it seems a good moment to consider a continental angle to his writing. To quote D. S. Grey’s excellent website :

“Pepys’ diary was written in shorthand so could not easily be read by a casual browser. There are, however, some passages of a secretive nature where, for reasons of concealment or because his passion deserves a special language, he resorts to a private code involving words based on Spanish, French and Italian.”

One rather gets the impression that Pepys’s active French was better than his Spanish.  I haven’t found much unambiguously Italian in the Diaries.  In places Pepys is macaronic: “I aime [love] her de todo mi corazon [with all my heart]”; “trouvant [finding] my muger  [my wife] at home”.

The website collects various of the passages: here is a small anthology of Spanish examples.

tocar mi cosa con su mano: to touch my thing with her hand

hazer me hazer la grande cosa: to make me make the great thing

de todo mi corazon: with all my heart

obtener algun cosa de ella como jo quisiere sino tocar la: to obtain any thing from her as I would wish except touch her

hazer la costa [sic for cosa]: do the thing

His Spanish is none too sophisticated and could well have come out of a dictionary.  Cosa does indeed have the meaning that Pepys gives it (it is well documented in bawdy poetry: see Jammes), but I wonder if this is just chance.

His spelling well matches what we know about the pronunciation of Spanish in his time.  He’s wrong though to write doz, which in standard Spanish then as now is dos.  Moher should be mujer:  Pepys accurately uses “h” to represent the guttural Spanish “j”.  He uses both corason and corazon: the Spanish pronunciation of “z” as “th” was only just coming in in his time, so Pepys may well be bearing witness to this changeover period.  La mosa is now moza, but Pepys was surely right by contemporary standards.

His grammar is a bit wobbly: hazendo should be haziendo and he fails to make hermosas and mujeres agree in number (he got their gender right though).  But como jo quisiere (note the future subjunctive) isn’t bad at all.  Jo should be yo by modern norms, but io was perfectly OK in the 1660s, and “i” and “j” were still interchangeable. 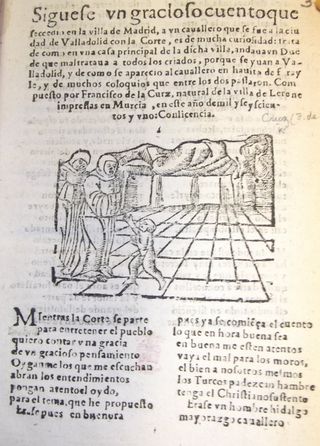 Of course, among us bibliographers Pepys is best known for his collection of Spanish plays and 76 chapbooks, now in Cambridge.  (The illustration shows a BL copy, C.63.g.19(3), of a chapbook of which Pepys had a copy.)  His reading knowledge was obviously sophisticated.  We know that he travelled in Spain, but this need not have translated into high-level speaking and writing skills.

But his commitment to Spain is not in doubt.  As he wrote in his diary for 30 September 1661:

“And indeed we do naturally all love the Spanish, and hate the French.”