Visitors to the independent Ukraine cannot fail to notice a decisive-looking woman’s face on the banknote of its national currency, the hryvnia. Who is she, and why was she honoured to have her face depicted on a 200-hryvnias banknote (of quite considerable value)?

Ukrainians, of course, know her face very well and will eagerly explain to foreigners about this strong “daughter of Prometheus” (a clichéd description from Soviet times), born as Larysa Kosach in the small town of Novohrad-Volynskyi , then  part of the Russian empire. As a 13-year-old  poet,  publishing her first poem Lily of the Valley in the journal Zoria in Lviv, she took the pen- name Ukrainka (meaning “Ukrainian woman”) – a bold step in a country where the words “Ukraine” and “Ukrainian” were forbidden and discouraged. She was the one who kept the whole nation going in moments of despair with a famous poem with the Latin title “Contra spem spero”.

The 42-year-old Lesya Ukrainka was a famous poet, dramatist, essayist, translator, collector of folk songs and social activist. She died 100 years ago, on 1 August 1913, of tuberculosis of the bones, in the Georgian health resort of Surami, where there is a museum. 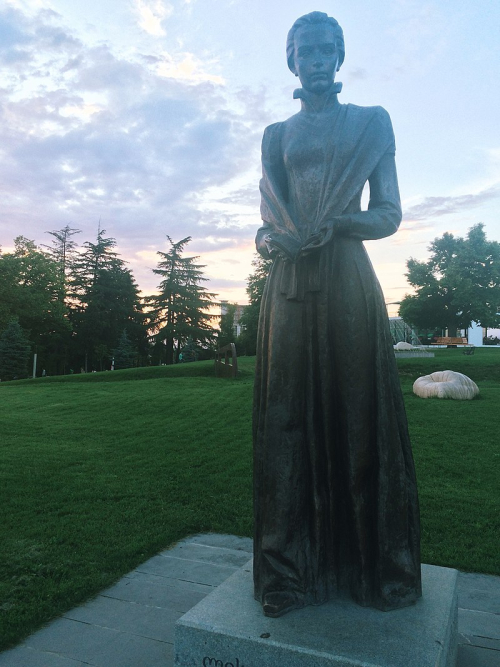 Monument to Lesya Ukrainka in the Georgian city of Telavi. Source: Wikimedia Commons

Lesya Ukrainka was a true pioneer in many fields. Here is just one example: her name is familiar to specialists on the subject of Don Juan  as she was the first woman in world literature to create her own original version of the legendary character. Her drama The Stone Host was written in 1912. The famous contemporary Ukrainian writer Oksana Zabuzhko made an important point by stating that Lesya Ukrainka presented “not a version of the legend, but a subversion of it” by giving the central role to a female character, Donna Anna. Title page of Dumy i mrii.

The book was published in 1899 in Lviv, then part of the Austro-Hungarian empire, as books and pamphlets in the Ukrainian language were banned in the Russian empire from 1876 by a secret decree known as the Ems Ukaz. Many other editions published after the death of Lesya Ukrainka are part of our rich Ukrainian collections, including the 12-volume edition from the 1970s.

Visitors to modern Ukraine have opportunities to see the dramas of Lesya Ukrainka in theatres, especially her popular The Forest Song (based on Ukrainian folklore) as well as a ballet in three acts by Mykhailo Skorulsky, created in 1936. The Yara Art Group in the USA developed its own original production. Highly intellectual dramas, such as  The Orgy (her last tragic drama, based on the history of ancient Greece under Roman occupation), the modernist psychological drama The Azure Rose and the historical drama Boyarynia (“The Noblewoman”, suppressed in the Soviet era) -  to mention just  a few - are now often staged in Ukrainian theatres.

Lesya Ukrainka continues to challenge new generations of readers and theatre-goers worldwide. It is time to study and perform her works more widely. She is not just a pretty lady on a banknote.

In a Different Light: A Bilingual Anthology of Ukrainian Literature. Translated into English by Virlana Tkacz and Wanda Phipps as Performed by Yara Arts Group, compiled and edited by Olha Luchuk. (Lviv, 2008). YF.2009.a.28990