Eighteen envelopes full of World War II Soviet propaganda material, containing about 350 items, including leaflets, newspapers and flyers are held in the  "Official Publications" collection at the British Library (shelfmark S.N.6/11.(2.)) and were accessioned by the British Museum on 31 August 1955. A short typewritten note in Russian, signed by one IU.Okov and addressed to a Mr Barman survives as part of the collection: “Dear Mr Barman, please find enclosed several of our leaflets in German and Hungarian. Yours sincerely, IU. Okov”. 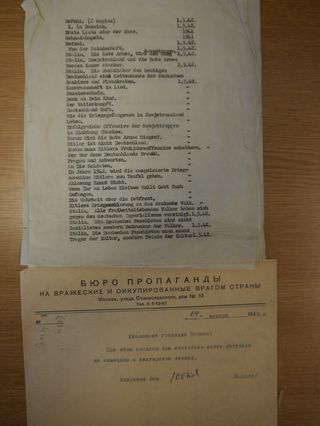 In the same envelope is a typewritten list of items, probably enclosed with the same letter. The letter is dated January 1945 and was sent by the Soviet Office of Propaganda, presumably to some British counterpart. However, as the collection contains more items in other languages, including Finnish, Polish and Romanian, it is very likely that this correspondence originated on more than one occasion. It would be very interesting to learn more about the provenance of the collection and its whereabouts before it came to the Library. Unfortunately, we don’t have any information on Mr Okov or Mr Barman, but it would be very interesting to learn who they were.

When war with the Nazi Germany broke out on 22 June 1941, the Communist Party of the USSR took a decision  to create a new organisation, which was called the Soviet Office of Political and Military Propaganda (later reformed into the Office of Propaganda on Enemy and Occupied Territories). By the end of 1941, eighteen propaganda newspapers were being published in the Soviet Union in various foreign languages, ten of them in German.

Even the German intelligence accepted that the Soviet propaganda was very effective. Propaganda aimed at Nazi soldiers and civilians in Germany and on occupied territories didn’t focus on communist ideology or criticise religion, the class structure of society, etc. The main objective was to condemn Hitler and his National Socialist German Workers Party. 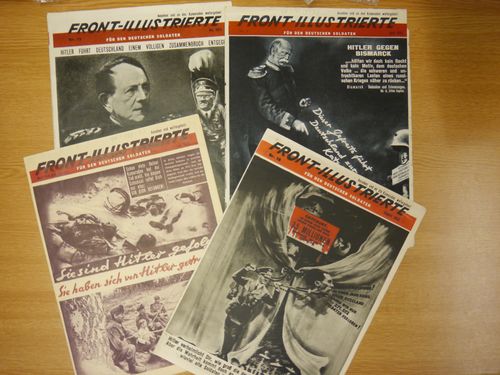 The propaganda materials vividly illustrated atrocities by Nazi troops on the occupied territories on the one hand and the strength of the Soviet Army and consequently its inevitable victory on the other. Among various propaganda techniques one of the most important was an emotional appeal to ‘common’ people who were forced to fight a war that was not in their interests. Images of women and children waiting for their husbands, sons and fathers back at home were widely used. Women and children in these pictures appeared miserable and ashamed that their loved ones were fighting on the Eastern front, and these impressions came out as genuinely poignant and moving.

Most of the flyers contain a pass written in German and Russian that could be torn off and presented to the Soviet troops when surrendering. In 1942, after the first German defeats, a special series of propaganda materials demonstrating the enemy's losses was launched. The propaganda message addressed to Germany's allies stressed the argument that the German fascists were using their allies' troops in the most dangerous situations and campaigns. 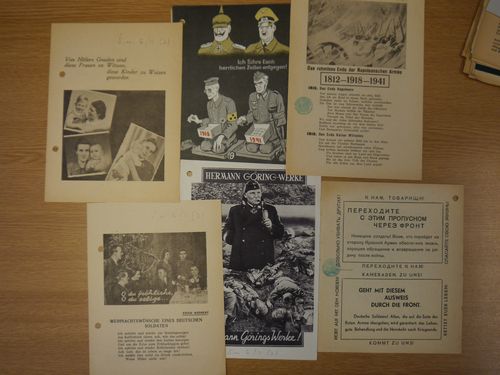 Several items from this collection can be seen in the current BL exhibition Propaganda: Power and Persuasion  which is on till 17 September 2013.