The Georgian anarchist prince and his gift

Musha (“The Worker”): a journal of the socialist- revolutionary party in Georgia [Or.5315] 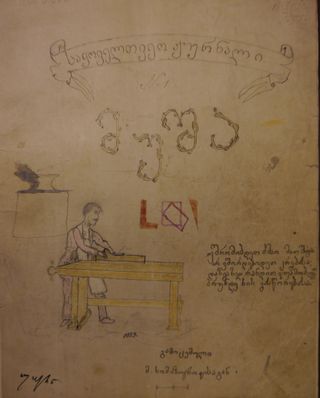 This is how Oliver Wordrop describes this Manuscript in his Catalogue of the Georgian Manuscripts in the British Museum [W 349].

This is a monthly hand-written journal by working men; the numbers are dated 1889-1891. It is apparently the work of one hand, including the illustrations, initials and borders.  The names of the authors of articles in prose and verse could be, for obvious reasons, fictitious. 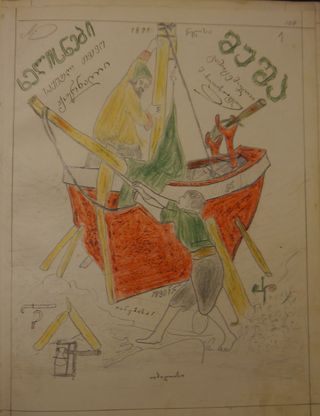 This journal obviously aimed to spread propaganda amongst peasants and workers, but when we look at it doesn’t give the impression of a revolutionary organ.  The handwriting is very neat and resembles that of  a diligent  schoolboy rather than an angry worker. 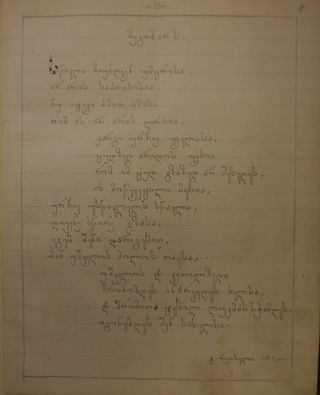 The articles are naive; some, especially those in verse, sound more like prayers or dreams of better times to come rather than fuming calls to revolution. It brings together a very interesting combination of different items including sermons.

This journal was presented to the British Museum on February 10 1898 by Prince Varlaam Cherkezishvili, quite a remarkable person.

manner) was a Georgian nobleman, intellectual, politician and journalist and a well-known figure in the International Anarchist Movement. He sensationally claimed that Marx and Engels plagiarized The Communist Manifesto and The Condition of the Working Class in England in 1844. He was later also involved in the Georgian national liberation movement.

He was born in Georgia (then part of Imperial Russia) in 1846 and moved to St Petersburg for further education. There he joined the Socialist movement, was arrested, imprisoned and exiled to Siberia in 1874. Two years later, he escaped to Western Europe, where he stayed for most of his life, settling in Britain in 1907. A few times during his exile he managed to return to Georgia, both legally and illegally.

He worked with the Russian émigré press and with fellow anarchists. He was also prominent in his criticism of Marxist ideas. His pamphlets Pages of Socialist History (1896), which was translated into nine languages, and Forerunners of the International (1899), followed by his book The Doctrines of Marxism (Geneva, 1903) provoked discussions and disputes in Russian and European socialist circles. Cherkezishvili tried to prove that Marx and Engels based The Communist Manifesto on the ideas of Victor Considerant , while Engels in his book The Condition of the Working Class in England lifted the work of the French socialist Buret . Cherkezishvili’s s sharp attack on Marxist philosophy made the young Stalin dispute with him in his famous work  Anarchism or socialism? These polemics continued during 1905-1907 in  Georgian periodicals.

Actively involved in the Georgian national liberation movement, Cherkezishvili helped to found the Georgian Socialist-Federalist Party , which demanded national autonomy for Georgia; he wrote a series of articles for the Times to bring the political situation in Georgia to the attention of an English-speaking audience. He expressed his support for Georgian independence vocally and in print; in 1907 he delivered a special declaration on this question at the Hague Peace Conference.

Along with other Georgian anarchists he took part in the publication of the first legal anarchist newspapers in the Georgian language: The Call (1906), The Voice (1906), and The Worker (1906).  Georgian anarchism combined in a unique form ideas of freedom with those of national independence.

During his time in Britain he helped to found Anarchist Red Cross; in 1912-16 he became the acting editor of a proposed 10-volume edition of Bakunin’s collected works , writing a biography of Bakunin for the first volume (London, 1915) [08285.de.96.]. During World War I he endorsed “war to the end against German militarism” and signed in 1916 the so-called Manifesto of the Sixteen.

After the Russian revolution of 1917 Georgia gained its independence. Cherkezishvili returned to Georgia in 1918 and was offered a seat in the Constituent Assembly of the Democratic Republic of Georgia. The Soviet occupation forced him to leave Georgia in March 1921. According to eye-witnesses, “the Soviet victory was a great tragedy for him.” He returned to London where he would continue to fight again for Georgia’s independence until his death in 1925.

The biography of this extraordinary person could be the subject  of further research, as could the history of the manuscript donated by him to The British Library. 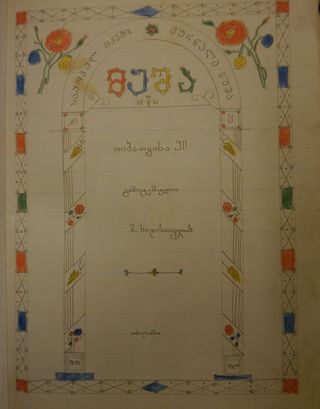 His most important works are held in the BL's printed Collections: