The British Library has lent two early Spanish books to the exhibition ‘Japonismo. La fascinación por el arte japonés’ at the CaixaForum in Barcelona and Madrid.

The theme of the exhibition is the influence of Japanese art in Spain in the 19th and 20th centuries.  The introduction, however, outlines the cultural exchanges that took place between European missionaries and the Japanese in the 16th and early 17th centuries. The first Europeans to reach Japan were three Portuguese traders who landed off Kyushu in 1543.  They were followed in 1549 by Jesuit missionaries.  In 1587 a Japanese edict was issued prohibiting missionary work, although it was not effectively observed.  The official banning of Catholicism followed in 1614 and the number of persecutions of Christians consequently increased. Virtually all contact ceased when Japan entered the period of isolationism in 1641 which was to last until 1853.

The annual reports that the Jesuit missionaries sent to their superiors were a major source of information reaching Europe about Japan.  They gained a wider readership when they were gathered together and subsequently printed and published.  One of our books in the exhibition is an example of such a volume: 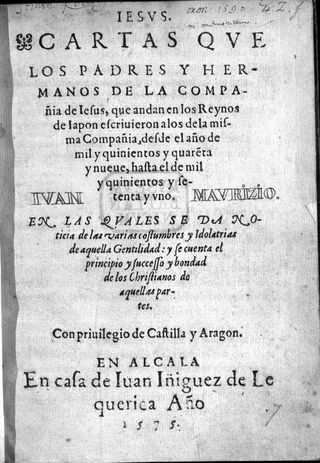 Cartas… de Iapon (Alacalá, 1575), title page.  The book is from the Old Royal Library (given to the British Museum in 1757) and belonged previously to the London bibliophile John Morris.

In addition to an account of St Francis Xavier’s arrival in Japan, a letter by Baltasar Gago includes the earliest description in the West of Japanese script: 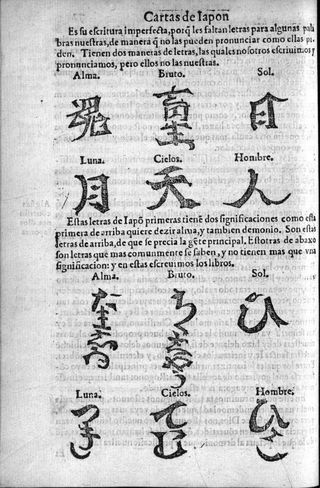 He illustrates how there existed two scripts, commenting that the top one (Kanji) was employed by the ruling class, while the lower (Hiragana)  was in more common use.  This was the script adopted by the Jesuits.  It would be more accurate however to say that Kanji was used for formal documents and Hiragana for less formal.

Our other work in the exhibition is an account of the first Japanese embassy to Europe which arrived  in 1584: The Japanese ‘ambassadors’ of the three daimyos (‘warlords’) were Jesuit novices, for the expedition was organized by Alessando Valignano, Jesuit Visitor to Asia, in order to demonstrate that the Japanese, unlike the indigenous peoples of South and Central America, were worthy of being ordained.  The young men travelled to Lisbon, Madrid and Rome.  While in Spain they were presented to Philip II and also visited the Escoria lpalace and the universities of Salamanca and Alcalá.  During their stay in Rome they witnessed the installation in 1585 of Pope Sixtus V. A later, more high-powered delegation travelled from Japan to Europe (1613-20) but by then the period of cultural exchange had all but come to an end.

The setting up of a press to facilitate both the missionaries’ work and also cultural exchange between Europe and Japan was another of Valignano’s initiatives. The Library’s collections include notable examples of Jesuit printing in Japan,  including a translation of Luis de Granada’s Guía de pecadores, printed in Japanese characters in Nagasaki in 1599 (G.11929*, 11929).