Henrik Ibsen and London - then and now

This September will see the opening of not one, but two, productions of Ibsen’s Ghosts in London, the first at the Rose Theatre (co-produced with English Touring Theatre) and a week later at the Almeida Theatre. Add to that an adaptation of Hedda Gabler by the Ibsen Stage Company at the New Diorama Theatre, entitled Recording Hedda, and the continuing and very successful Young Vic production of A Doll’s House – now transferred to the Duke of York’s Theatre – and it will be a month of autumnal delight for Ibsen enthusiasts in London!

However it is interesting to remember that the initial reception given to Ibsen in Victorian London was somewhat mixed - a source of delight for some but for others, moral outrage.

It was Edmund Gosse, poet, author, critic and one-time librarian at the British Museum, who was first responsible for bringing Ibsen to the public’s attention in Britain. In an article in The Fortnightly Review in January 1873 entitled ‘Ibsen, The Norwegian Satirist’, Gosse predicted that the plays ‘sooner or later, will win for their author the homage of Europe’.

The critic and translator William Archer was probably Ibsen’s greatest champion.  His reviews and articles on Ibsen, as well as his translations, were key to making the dramatist better known and understood in Britain. Quicksands, Archer’s adaptation of Pillars of Society, was the first of Ibsen’s plays to be performed in England - at the Gaiety Theatre in 1880. The neutral reception of this performance gave little indication of the great controversy around Ibsen’s plays - in particular their examination of the conflict between the individual and society - that was to follow. 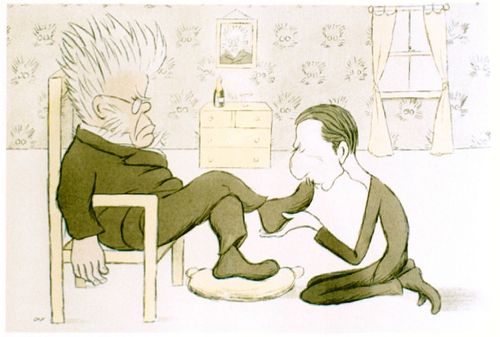 A Doll’s House at the Novelty Theatre in June 1889 was the first substantial production of an Ibsen play in England and it provoked the start of a heated debate. Clement Scott, theatre critic for The Daily Telegraph, was one of Ibsen’s fiercest opponents. In common with many, he questioned the motives of the central character, Nora, in abandoning her children at the end of the play. In 1891, further outraged, he described Ghosts as ‘positively abominable’ likening it to ‘an open drain’, ‘a loathsome sore unbandaged’ because it dealt with topics one would not expect to be addressed in the theatre of the time - such as venereal disease and euthanasia.

Ibsen and his plays continued to generate a great deal of interest and discussion. As Henry James observed, Ibsen had become ‘the theme of many pens and tongues… a barometer of the intellectual weather’.  Bernard Shaw was a lively defender of Ibsen, and his work, The Quintessence of Ibsenism (originally a lecture for The Fabian Society) first appeared in June 1891 at the height of the Ibsen ‘storm’. Shaw focused on Ibsen’s plays as a means of exposing middle-class hypocrisy, writing that ‘the statement that Ibsen’s plays have an immoral tendency, is, in the sense in which it is used, quite true. Immorality does not necessarily imply mischievous conduct: it implies conduct, mischievous or not, which does not conform to current ideals.’

A number of English actresses became famous for their portrayal of Ibsen’s female characters.  Of particular importance was Elizabeth Robins who co-produced and played the lead role in the first British staging of Hedda Gabler.  When it opened in April 1891, it was described by a Sunday Times critic as ‘one of the most notable events in the history of the modern stage’ and was influential in winning round Ibsen sceptics.  In 1928, the centenary of Ibsen’s birth, she gave a lecture entitled ‘Ibsen and the Actress’, in which she reflected on how ‘no dramatist has ever meant so much to the women of the stage as Henrik Ibsen’. Edmund Gosse would surely have been pleased that his prediction on Ibsen’s standing in Europe was correct, and that it remains so 140 years later.  And I like to think that he would also have been pleased to know that the British Library, the successor to the institution for which he worked, now has such rich holdings of material relating to Henrik Ibsen.   These include first editions, translations, manuscript letters, recordings of play performances, as well as a veritable wealth of secondary literature. 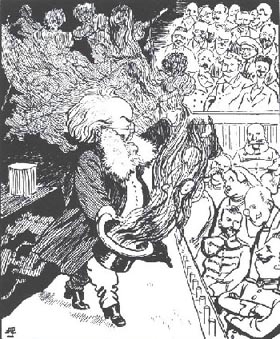 ‘Ibsen on the world Stage’, Drawing by Alfred Schmidt in Hver 8. Dag (1898). (Image from the National Library of Norway)

Thank you for alerting me to current and future productions of Ibsen's plays. Also, I had always wondered how Victorian England had coped with his plays; I have now seen a couple of productions in London of 'Dolls House', and was always happy to see that - judging by the mostly sold-out productions - contemporary London doesn't seem to have a problem with 'facing' at least this quite tough message of a woman coping with the demands of society. Thank you for some nice illustrations too.