The Macchiaioli (literally, patch-  or spot-makers), was a  group of Italian artists based in Tuscany during the second half of the 19th century, formed more than a decade before the French Impressionists. Their work was influenced by Camille Corot, Gustave Courbet, the painters of the Barbizon School, and other 19th-century plein-air painters whose work they saw on their visits to Paris, especially in the Exposition universelle of 1855. The output of the Macchiaioli includes enormous Risorgimento battle scenes and other military subjects, landscapes, and peasant and bourgeois subjects; they are, however, best-known and loved for the small, sketch-like paintings from which their nickname is derived (the ‘macchia’ being a sketch-like composition using blocks of colour). Giovanni Fattori’s La Rotonda dei Bagni Palmieri, is emblematic of this type of painting.

The affinities between the Impressionists and the Macchiaioli have often been pointed out, most recently in an exhibition at the Musée de l’Orangerie in Paris with the potentially crowd-pulling title Les Macchiaioli, des Impressionistes Italiens? (The exhibition will be shown at the Fundación MAPFRE  in Madrid with the title Macchiaioli. Realismo impresionista en Italia, 12 September 2013 - 5 January 2014). 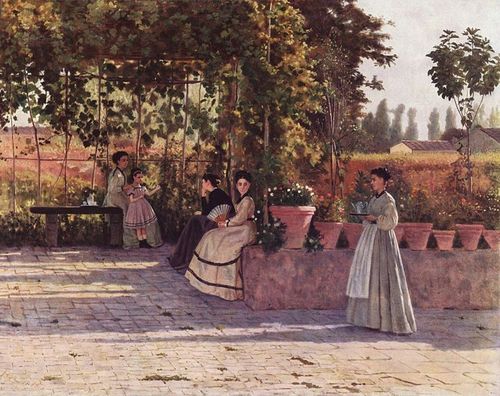 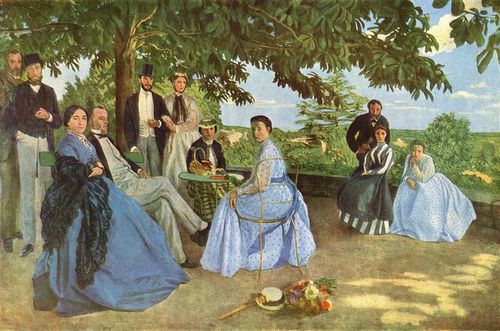 Macchiaioli finished paintings are, however, often closer in style to Academic or Realist painting, with echoes of Tuscan Trecento and Quattrocento art. The often-made parallel between Silvestro Lega’s La visita (The visit) and a predella painting by Fra Angelico showing the Visitation exemplifies the latter influence. 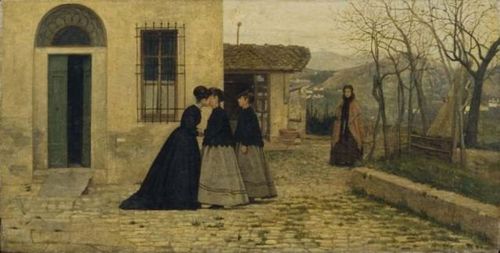 The richest collection of Macchiaioli paintings is that of the Galleria d’arte moderna, at the Palazzo Pitti, in Florence. Their works can also be found in the Galleria nazionale d’arte moderna in Rome  and in numerous other Italian museums and galleries, especially in Tuscany. They are scarcely represented in museums outside Italy. In Great Britain the only macchiaiolo painting in a British public collection is a sketch for ‘Straw Weavers at Settignano’. by Telemaco Signorini, donated to The National Gallery in 2008. The British Museum has some prints by Fattori, and Telemaco Signorini, most of them recent acquisitions [See Martin Hopkinson, Italian prints, 1875-1975 (London, 2007) ; British Library shelfmark YC.2009.b.1080.]

This neglect of the Macchiaioli, and more generally of 19th-century Italian art, is due to the francocentric view of 19th-century art that dominated museum acquisition policies until the late 20th century when the richness and variety of other national schools (for example German, Scandinavian, and Russian) were revealed through a series of important exhibitions, and museums began trying, albeit a bit late in the day, to fill gaps in their collections. Winter Landscape, the only painting by Caspar David Friedrich in the UK, was acquired by the National Gallery as recently as 1987.

The literature on the Macchiaioli is extensive. In Italy, a proliferation of exhibition catalogues, whether of the movement as a whole or of individual artists, reached a climax  in 2008, the centenary of Fattori’s death. There are also two important monographs in English, by Norma Broude (1987; LB.31.b.840) and by A. Boime (1993, YA.1994.b.6559 ). The first and only exhibition in Great Britain was in 1982, in Manchester and Edinburgh. Perhaps exhibition organisers in London should take their lead from Paris and Madrid?

Thematic exhibitions on the Macchiaioli
The Macchiaioli: Masters of Realism in Tuscany [exhibition in the Manchester Art Gallery and Edinburgh City Art Centre]. (Rome, 1982). X.425/5604.