The regular WESLINE Conference took place at the beginning of this month, attended by a number of staff working with the British Library's West European collections. Here two of them give their impressions of the event.

The WESLINE Conferences are that rare opportunity to hear from and mix with other librarians working with Western European languages and the September 2013 two-day event at Balliol College, Oxford was no exception.

The packed programme of events (full details can be found on WESLINE’s website) lived up to its promise. On the first day we heard about the future of modern language collection management and different initiatives being driven forward, such as the use of COPAC CCM, which can be used to identify and compare the holdings of major UK research libraries in particular subject areas. This topic led smoothly into the future of librarians working within modern languages, raising the familiar issue of restructuring, and gave the results of a questionnaire sent to Wesline members earlier this year to examine the extent of their language expertise and how their responsibilities lie within their own institutions.

Blogging, a now indispensable tool on library websites, was discussed in detail, particularly interesting for those of us who read blogs but have not yet ventured into this world as bloggers! Talks on contemporary Brazilian film and on Franz Kafka and his manuscripts completed the very full day.

Day two began with a section entitled ‘Lost voices’ which encompassed librarians working in little-known or background fields. We had two very interesting talks on the small but thriving area of Celtic Studies, and another on the role of the science librarian –  all of which emphasised the need for linguistic expertise in their daily work.

The discussion then moved to a topic dear to my own heart, as for the first time at a Wesline conference, cataloguers were featured. Speakers from the foreign language cataloguing teams at the British Library, Cambridge University Library and the London Library certainly gave a voice to a group of librarians who often feel hidden yet who also require a great deal of linguistic expertise when coping with the intellectual rigours of subject work, deriving records, RDA, and Authority Control.

Further talks coverd the ways in which the work of subject specialists is changing, often to take on extra linguistic areas in which they actually do not have expertise, as budget cuts bite. A very informative talk on the thorny issue of open access followed, and the last session featured speakers introducing Europeana, a digital European cultural heritage library bringing together resources from museums, archives and galleries, and The European Library, which was established in 1997 as a joint web portal of 48 European national libraries. The Director of Oxford’s Electronic Enlightenment Project then described the project’s work  to collate scholarly correspondence of the Enlightenment era and create an electronic biographical dictionary.

The conference ended with a presentation on western manuscripts and rare books held in the Bodleian Library followed by various tours; mine was to the fascinating Taylor Institution Library to see the western European language collections.

To finish - the conference dinner in a Spanish restaurant should not be ignored as it provided another opportunity to socialise with colleagues from other institutions as part of an extremely well-run conference. For this we have to thank Nick Hearn, French and Russian Subject Specialist, and Joanne Edwards, Subject Consultant, Spanish, Portuguese and Latin American Studies, Taylor Institution Library, Oxford, who organized the conference with such dedication and efficiency.

Having heard my colleagues speak reverently about the Wesline conference I felt a great sense of anticipation and excitement going there myself for the first time and I must say I wasn’t disappointed!

For me the best thing about conferences is the people I meet and hearing their stories about life and work. I made some very good new contacts with whom I hope to stay in touch for a long time. Funnily enough, the most surprising conversations I had were with some of my own British Library colleagues! Shows you what a change of environment can do for internal relations, as well as for external ones.

Another perk of going to conferences is that you get to visit places you would otherwise never have a chance to explore. Balliol College is such a place. Not only could we wander in and out without having to pay, but we stayed in rooms around the quads (I learned a new word!) and had our meals in the dining hall, surrounded by portraits of former Masters of the College such as Edward Heath, Harold Macmillan and the British Library’s own former Chairman Sir Colin Lucas. 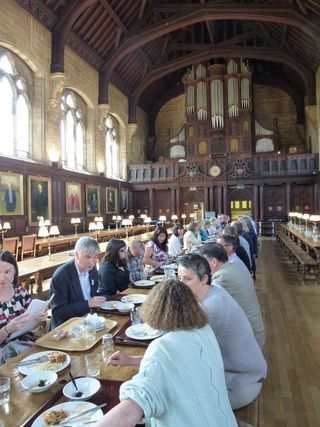 It almost felt like being on holiday, but this was definitely not the case. Nick Hearn and Joanne Edwards had put together a busy programme jam-packed with talks, presentations and panel discussions. Talking of jam, another BL colleague had gone way beyond the call of duty by getting up at dawn and baking the most delicious little pastries to go with the tea and coffee. The only slightly darker aspect was the weather:  it was far too nice and sunny to be sitting indoors! Lucky for us the speakers quickly diverted our attention from the weather outside to their fascinating talks and presentations.

It was interesting to hear how other libraries approach issues like collection development and approval plans. Things that I found particularly useful to hear about were the shifts in collection development in many academic libraries from actively selecting new titles to using automated techniques in clever ways.  A lot needs to be done still before we reach the point where most selection can be left to robots, and luckily the tried-and-tested partnership between librarian and scholar is still going strong, augmented by input from students via tools such as Demand-Driven Acquisitions.

An interesting point was made about the need for subject librarians to know more about existing collections, in order to be better able to identify items for digitization. The COPAC Collection Management Tools project, funded by JISC, seeks to help academic libraries in finding out what is unique in their collections, in setting priorities and in making decisions on what to digitise.  Approval plans, if set up and managed properly, can also help us to make the most of our resources when selecting. In Oxford they seem to work well, and  by no means imply shifting responsibility from the librarian to the supplier.

I have great admiration for the Bodleian's History Librarian Isabel Holowaty, who has made blogging into a truly multi-media and interactive art. She inspired me to think more about how best to blog, so hopefully we will reach more people with our posts! 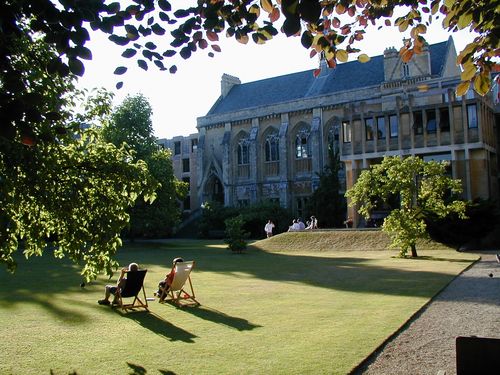 Garden Quad, Balliol College; the conference was in the building to the right.  (Photograph by Tom Page, from Wikimedia Commons)