A country made out of 'bits and bobs’

In Janet Hitchman’s autobiography The King of the Barbareens (London, 1960: British Library shelfmark X.990/17333) she recalls how, as a young girl in 1920s Norfolk, she encountered Czechoslovakia for the first time. ‘There isn’t such a place,’ her foster-mother retorted, only to learn from a policeman that it was ‘a new country they made after the war out of bits and bobs that used to be Austria, only you say it Scheckoslovakia’. ‘And now [she continues]  it was a pleasure to look at the rampant lion stamped on [the lamp glass], with its four broad-spread toes on each foot, its curly tongue and lace-patterned tail, and to know that it came from Czechoslovakia, a country made out of “bits and bobs”.’

Shortly before his death in January 1806 the British Prime Minister William Pitt the Younger is said to have remarked ‘Roll up that map of Europe; it will not be wanted these ten years,’ reflecting on the consequences of Napoleon’s recent victory over the Austro-Russian army at Austerlitz. Today the site of the battlefield lies within the Czech Republic, about ten kilometres from Brno, and is known as Slavkov u Brna. Had Pitt given the timescale as 110 years, he would not have been surprised to find that the map of Europe as it then existed would have been of even less use in 1915 than in 1815.

The map of Europe at the end of the First World War was a tattered object bearing the marks of congresses, partitions, Bismarck’s wars of expansion, treaties and rising nationalist movements. Ever since the annexation of the Crown Lands of Bohemia, Moravia and Silesia by the Habsburgs, this area of central Europe had been particularly contentious. Ruled by the imperial house of Austria since 1526, the inhabitants of the region had seen their hopes of independence crushed at the battle of White Mountain in 1620, when the Bohemian Protestant nobles had suffered a conclusive defeat by the troops of the Holy Roman Emperor. There followed the Czech ‘Dark Ages’ (tma) when the survival not only of Bohemian identity but of the Czech language seemed in jeopardy.

But with the National Revival of the late 18th-early 19th centuries, the tide turned, and after the Ausgleich of 1867 which granted Hungary a measure of autonomy, it seemed that the Czechs might be accorded similar privileges. If Crown Prince Rudolf had not committed suicide at Mayerling in 1889, a compromise might have allowed him to reign as King of Bohemia; he had served as an officer in Prague, and had strong sympathies with its people. However, when the map was being redrawn in 1918, the solution was a very different one.

Simon Winder in Danubia: a personal history of Habsburg Europe (London, 2013) declares, ‘Most academic of all were probably the Czechs’. He describes with glee the ‘apogee of absurdity’ which was reached in October 1918 when Tomáš Garrigue Masaryk (1850-1937) and his colleagues posed in front of the Liberty Bell to proclaim an independent Czechoslovak republic in Pennsylvania (his italics). The delegation had been in Philadelphia to negotiate with some American Slovaks, and the photograph was intended to symbolize a shared democratic inheritance. Winder, while disparaging the ‘imagined set of shared Slav values’ which formed the basis of the new Czechoslovakia, overlooks the objective and far from chauvinistic position from which Masaryk proceeded. 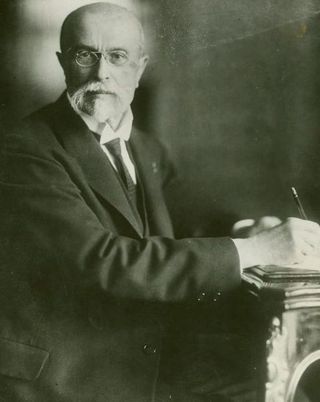 Masaryk  was born in Moravia of mixed Czech and Slovak parentage, and studied in Vienna before being appointed in 1882 to the chair of philosophy in the Czech part of Prague University. Interestingly, he spoke out decisively against those who believed in the authenticity of the Královédvorské and Zelenohorské manuscripts, two collections of allegedly mediaeval Czech poetry which proved to be forgeries. He believed that nationalism which was based on a fabrication was blighted from the start, and was prepared to suffer the personal obloquy which this invited.

He served in the Reichsrat (Austrian Parliament) from 1891 to 1893 in the Young Czech Party and again from 1907 to 1914 in the Realist Party, which he founded in 1900, but did not campaign for the independence of Czechs and Slovaks from Austria-Hungary. In 1915 he became a professor at the newly-formed School of Slavonic and East European Studies, and during the war visited France and Russia to urge the break-up of the Austro-Hungarian Empire before its imminent collapse.

In 1918 he was recognized by the Allies as the head of the provisional Czech government, and was elected President in November that year. He had already convinced Woodrow Wilson of the justice of his cause, and in October 1918, from the steps of Independence Hall in Philadelphia, he called for the independence of the Czechoslovaks and other oppressed peoples of Central Europe. (There had been suggestions that the second city of the new Czechoslovakia should be called Wilsonovo, but this was rejected in favour of Bratislava, a more resonantly Slavonic name than Pressburg or Pozsony, leaving the President of the United States to be commemorated in the name of one of Prague’s railway stations.)

During the post-1968 era the national holiday on 28 October commemorating the proclamation of the first Czechoslovak Republic was played down, and 74 years after its establishment the Czechs and Slovaks parted company in the ‘Velvet Divorce’. The Slovaks, on the whole, have quietly forgotten the date, but the Czechs still mark it enthusiastically. While the state itself may no longer exist, the values summed up by its Hussite-inspired motto ‘Pravda vítězí’ (Truth shall prevail) are still worthy of celebration.