Don Juan Manuel, an aristocratic Spanish writer of the fourteenth century, was acutely aware of his social status and the sort of learning that was appropriate to it.

In El conde Lucanor he says he will write about how men may benefit their souls and bodies:

[and although these things are not very intellectual in themselves, as if I were to speak of the science of theology, or metaphysics, or natural or even moral philosophy, or other hard knowledge, I hold that it is more fitting and beneficial for me according to my estate]

(In the nineteenth century, tiologías in the Spanish of the streets meant something abstruse.)
A sixteenth-century manuscript has the variant:

We can understand why Don Juan might want to keep off subjects such as theology, but what was his objection to geometry?

In the Middle Ages the lower level of studies, the trivium, consisted of grammar, rhetoric and logic; the higher-level quadrivium covered arithmetic, astronomy, music and geometry.  (You can still insult someone by calling them trivial, but you can’t praise them by calling them quadrivial.)

[Which vice is called curiosity, that is, great anxiety for knowledge, like one who,  abandoning moral philosophy, gave himself over to learning astrology, geometry or other impertinent sciences] (Rubió, I, 219).

In 1547, in an oration in praise of learning delivered to the nascent University of Coimbra, Arnoldus Fabricius praised the usefulness of geometry as it is the foundation of architecture, and where would be we be without houses?

According to Vitruvius, On Architecture, 6.1.-2, when the philosopher-scientist  Aristippus was shipwrecked, he was naturally disoriented and distressed.  Perhaps he’d fallen among savages, cannibals or worse.  Until he saw that the natives had drawn geometrical figures in the sand.  ‘We are among civilised people,’ he proclaimed.  This is depicted in the elaborate frontispiece to an edition of Euclid’s Works shown here: 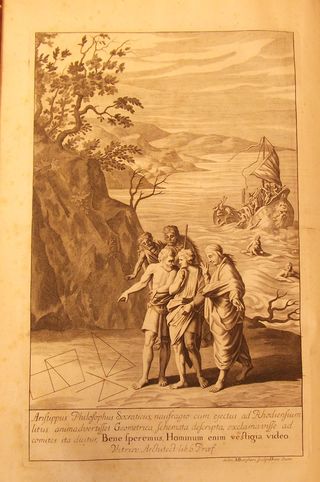 Geometry is still useful.  Space aliens don’t speak English, or indeed any earthman language.  It’s generally assumed that the way to communicate with our distant neighbours is via geometrical figures.

Perhaps Mission Control have been studying their Vitruivius.