What is it about years ending in 13? They must be lucky for some, because 2013 has seen the anniversaries of many major cultural figures and events. Today we can add another to the list: Georg Büchner, born on 17 October 1813 and considered one of the most innovative, influential and brilliant figures in German literature. Germany’s most prestigious literary prize bears his name and the German film director Werner Herzog  described Büchner’s unfinished play Woyzeck as “the best thing ever written in our language”.

His posthumous reputation is all the more amazing considering that Büchner died at the age of only 23, none of his plays were performed in his own lifetime, and his only work of prose fiction also remained unfinished. Indeed, only one of his works was published without alteration or censorship before his death: his doctoral dissertation on the nervous system of fish. 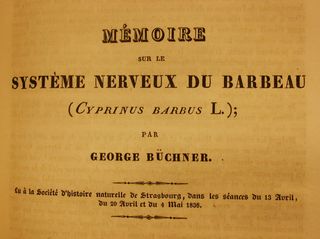 Büchner was involved in both literature and radical politics from his student days. In 1834 he wrote the pamphlet Der Hessische Landbote, a call for revolution with the slogan “Friede den Hütten! Krieg den Palästen” (Peace to the huts! War to the palaces!). The pamphlet was revised and published by Friedrich Ludwig Weidig and, although Büchner apparently repudiated Weidig’s revised text, he was forced into exile as a result of its publication. 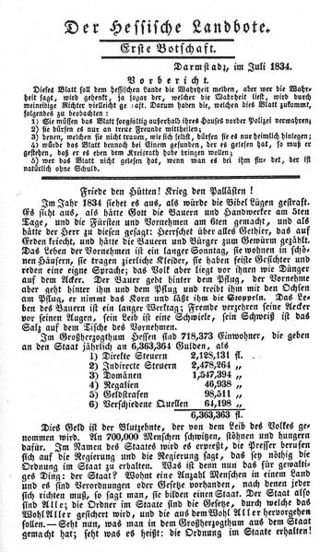 His plays also have a radical social edge. Dantons Tod, set during the French Revolution, depicts the conflict between Danton and Robespierre. The comedy Leonce und Lena satirises the small, absolutist German states of the time: its hero and heroine, prince and princess of the states of Popo and Pipi, each run away to avoid their arranged marriage only to meet, fall in love, and eventually end up married and resigned to the meaningless court life they had sought to flee.

The unfinished novella Lenz, based on a real episode in the life of the 18th-century playwright J.M.R. Lenz, is more concerned with human psychology as Lenz seeks refuge in a small mountain village from the mental illness that increasingly torments him.

Social and psychological themes come together in Woyzeck, the story of a poor soldier trying to support his common-law wife Marie and their child. Overwork, exploitation and poverty are destroying him physically and mentally, and he is haunted by apocalyptic visions. When Marie is seduced by another man, Woyzeck kills her in an act of desperate violence.

Woyzeck was first published in 1870 and its unsparing depiction of poverty and cast of mainly working-class characters, unique in Büchner’s own day, immediately appealed to the Naturalist writers of the time. A generation later its fragmentary form and hallucinatory images made it equally attractive to the Expressionists.

It is perhaps Woyzeck above all which has gained Büchner the reputation of a writer ahead of his time, but all his works demonstrate the formal, linguistic and intellectual boldness which make him seem so modern. His early death deprived German literature of a major talent, and makes him the country’s greatest literary “what if…?” 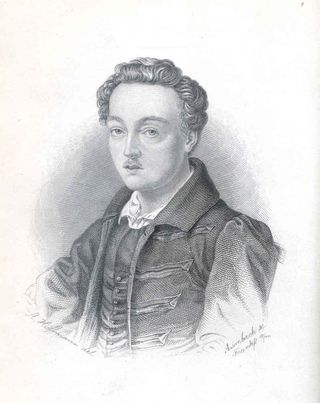