This is a traditional Scottish song for October 31st, where the custom of children dressing up as ‘guisers’ and going from house to house to sing, ending with cries of ‘Gi’e us our Hallowe’en!’ before being rewarded with cakes and ‘dooking’ for apples long pre-dated the American practice of Trick or Treating. Readers of Robert Burns’s ‘Tam o’ Shanter’ will be familiar with the grisly gathering at Kirk Alloway which the hapless Tam encounters on his way home, late one stormy night, from drinking too long with Kirkton Jean and other cronies. Every country has its tradition of witches – and not all are nocturnal.

Among the Slavonic peoples a mysterious figure can be found who reveals herself not at night but in broad daylight – at the very mid-point of noon itself. Known as Południca in Polish, Полудница (Poludnica) in Serbian, Polednice in Czech, Poludnica in Slovak, Полудница (Poludnitsa) in Bulgarian and Russian, Полудниця (Poludnytsya) in Ukrainian, she sometimes appears as a young woman in white, shimmering in the heat-haze on summer days, but also as a sinister old crone, like a farmer’s wife bent and gnarled from years of work in the fields, leaning with a stick and wearing a kerchief on her head. She had the power to afflict those who met her with sunstroke or even madness, but was also invoked by mothers to deter their children from running out in the midday sun or wandering into crops ripe for harvest and trampling them. 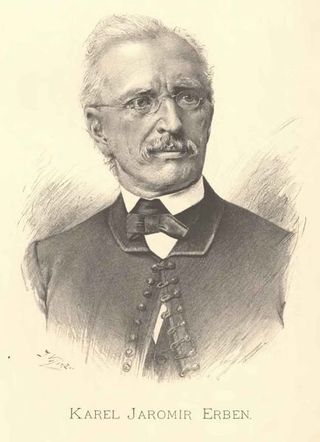 When Karel Jaromír Erben (1811-1870; portrait above from Wikimedia Commons)  was working with the Czech historian František Palacký, travelling through small Bohemian towns in search of historical archive material, he used his free time to collect folk-songs and stories which he later published in several collections, e.g. Prostonárodní české pisně a říkadla [National songs and riddles] (Prague, 1896-1897; British Library shelfmark 011586.m.17). Later, in 1853, he produced a collection of twelve original poems inspired by folk motifs under the title Kytice [A Bouquet], adding a thirteenth poem, ‘Lilie’, for the 1861 edition (BL shelfmark 1607/2791). One of the shortest of these, all the more dramatic for its compression and tension, is Polednice [The Noonday Witch], which Antonín Dvořák made the subject of a symphonic ballad in 1896.

Writing the music, Dvořák inserted quotations from the poem in the margins to help him evoke the mysterious atmosphere of the strange figure’s appearance in a Czech peasant home where the harassed mother threatens her child that the witch will come and take him if he does not stop grizzling – with terrible consequences. Although he did not set the text directly, its rhythms and intrinsic music are reproduced in his composition, and I hope that the following version, part of a complete translation of Kytice to be published soon by Jantar Publishing  preserves something of this and will chill our readers appropriately. Happy Hallowe’en!

By the bench there stood an infant,
Screaming, screaming, loud and wild;
‘Can’t you just be quiet an instant?
Hush, you nasty gipsy-child!

Now it’s noon, or just about,
Daddy’s coming home for dinner:
while I cook, the fire’s gone out—
all your fault, you little sinner!

Hush! Your cart’s here, your hussar—
look, your cockerel!—Go on, play!’
Crash, bang! Soldier, cock and cart
To the corner fly away.

Once again that fearful bellow—
‘May a hornet come and sting you!
Hush, you naughty little fellow,
Or the Noonday Witch I’ll bring you!

Come for him, you Noonday Witch, then!
Come and take this pest for me!’—
In the door into the kitchen,
Someone softly turns the key.

Little, brown-skinned, strange of feature,
On her head a kerchief pinned;
With a stick – crook-legged creature,
Voice that booms like roaring wind!

‘Give that child here!’ ‘Lord, forgive
this sinner’s sins, my Saviour dear!’
It’s a wonder she still lives,
For see—the Noonday Witch is here!

Silent as a shadow wreathes,
The witch towards the table’s slipping:
Mother, fearful, scarcely breathes,
In her lap the child she’s gripping.

Twisting round, she looks behind her—
Poor, poor child—ah, what a fate!
Closer creeps the witch to find her,
Closer—now she’s there—too late!.

Now for him her hand is grasping—
Tighter squeeze the mother’s arms:
‘For Christ’s precious torments!’ gasping,
She sinks senseless with alarm.

Listen—one, two, three and more:
The noonday bell is ringing clear;
The handle clicks, and as the door
Flies wide open, father’s here.

Child clasped to her breast, he found,
Lying in a faint, the mother;
He could hardly bring her round,
But the little one was – smothered.