A Saint and a Sinner

25 November is the feast-day of St. Catherine of Alexandria, commemorated as the patron not only of philosophers, female students and librarians, but also of wheelwrights, millers, lace-makers and spinsters. 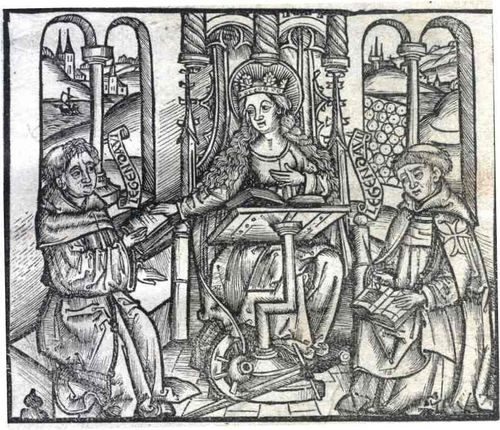 A Christian maiden of outstanding beauty and learning who refused a pagan bridegroom, she aroused the wrath of her would-be suitor’s father, the emperor Maxentius, who threw her into prison and summoned 50 philosophers to reason with her. When, instead, she converted them all to Christianity, Maxentius had them flung into a fiery furnace and Catherine whipped before ordering her execution on a machine with four-bladed wheels. This miraculously shattered, and when the furious emperor had Catherine beheaded, angels carried her body to Mount Sinai, where St. Helen later founded a monastery to house her relics.

This is the legend recounted by the mediaeval Czech Život svaté Kateřiny (Life of St. Catherine), which survives in a manuscript in the Moravian Provincial Library, Brno, dated to the early 15th century. Consisting of 3,519 lines of verse, it describes Catherine’s conversion and martyrdom. In 1647 the manuscript was carried off from the of the Bohemian nobleman Petr Vok of Rožmberk’s, private collection, the largest humanist library in Europe, by the Swedes during the Thirty Years’ War. It remained in the Royal Library in Stockholm for over 200 years until, in 1853, a doctor and scholar named Josef Pečírka arrived there in search of items from the looted library, ‘with no other recommendation than that I was a Czech,’ he recalls. The librarian, Herr Arvidson, assured him that this was all the recommendation he needed, and allowed him free access to the treasures of the collection.

The Catherine manuscript was presumed to date from the 17th century, but the excited Pečírka realized that it was far older on the evidence of words occurring in the so-called Dvůr Králové manuscript, a collection of ancient Czech poetic fragments allegedly discovered in 1817 by the Librarian of Prague’s National Museum, Václav Hanka.  He transcribed as much as he could during his stay, and through diplomatic contacts was able to have the rest copied and sent to him. In 1878, the original codex, with other items from the same library, was returned from Stockholm to Prague. Meanwhile, in 1860, a scholarly redaction had been published in Prague with a double preface by Pečírka and by the editor, the National Museum’s archivist Karel Jaromír Erben (better known today for his much-loved cycle of poems, Kytice). The British Library holds a copy of this first modern edition at shelfmark 11586.aa.17. 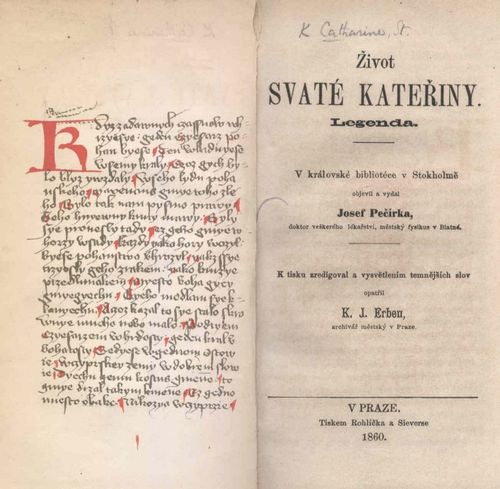 The title-page of Pečírka’s edition of the Život svaté Kateřiny (Prague, 1860; BL 11586.aa.17.), including a facsimile of a page from the original manuscript.

When setting out for Sweden, Pečírka had been urged by Hanka to bring back the second part of the Dvůr Králové manuscript. It was nowhere to be found – hardly surprising, because (as Hanka well knew), it did not exist – he himself had forged the ‘surviving’ document. The year after Erben’s edition of Život svaté Kateřiny appeared, Hanka died and was honoured with the first state funeral to be held in the newly-consecrated cemetery of Vyšehrad overlooking Prague.

Shortly afterwards a forensic enquiry ordered by the Emperor Franz Josef proved the Dvůr Králové manuscript to be a modern forgery. The treasure brought back through Pečírka’s efforts proved far more valuable than the fruits of Hanka’s well-meant duplicity. Hanka had acted in the interests, as he saw them, of Czech national literary prestige, and one can only hope that St. Catherine, the patron saint of librarians, looked kindly on this somewhat shady member of the profession.