Today he is practically forgotten, but at the turn of the 16th and 17th centuries, Marcello Macedonio (1582-1619) stood at the centre of Roman and Neapolitan literary life. He attended both the Accademia degli Umoristi (‘of the Humorists’) in Rome and the Accademia degli Oziosi (‘of the Leisurely ones’) in Naples, both the most prestigious literary centres of their respective cities.

Le nove muse, (‘The Nine Muses’), is a collection of his poems published in Naples in 1614. The volume is especially interesting for its characterful illustrations representing each of the muses. Engraving in Naples in the early17th century was less advanced than in other cities such as Rome and Venice. It is rare, therefore, to come across engravings of such quality produced in Naples during this period. The engraver was Giovanni Felice Paduano, active in Naples in the early 17th century, about whom practically nothing is known; and surviving works that can be attributed to him are few.

It is interesting how the engravings correspond to the themes of the poetry. Notice how in the depiction of Erato, muse of love poetry, Cupid’s bow and arrow make the same shape as the muse’s bow and violin. This refers to the captivating quality of music (and poetry), which was often compared to the power of love. Yet the section devoted to Erato is entitled ‘Gli amori di Cristo e della Croce’ (‘The Loves of Christ and of the Cross’). 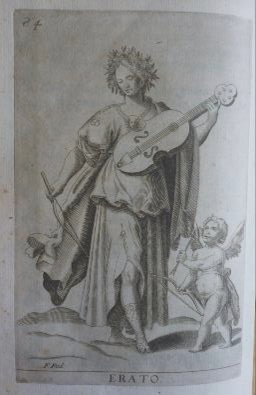 The juxtaposition of the engraving of Erato and the poem about religious devotion betrays the confused relationship between sacred and profane concepts in elite Italian society during this period. The overall structure of the volume also betrays this ambiguity. It begins with a poem entitled ‘Sogno di Scipione’ (‘Dream of Scipione’) – referring to the volume’s dedicatee, Cardinal Scipione Borghese, nephew of Pope Paul V. It ends with a poem entitled ‘Per una dama nel piglar i bagni’ (‘For a Lady Taking a Bath’). Likewise, the muse to which the first section is devoted, Clio, is shown covered in clothing, whereas, Thalia, in the final section, is shown scantily dressed and bare-breasted. 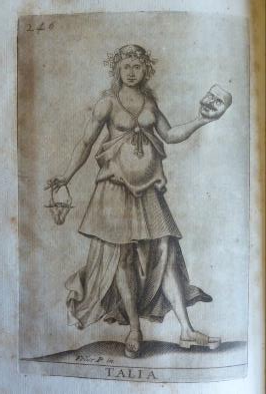