Cultural history and history of education is a relatively new research trend, so it was not obvious to the previous generations of librarians and curators that future scholars would want to examine textbooks. This type of material is difficult to collect and preserve. Although produced in large quantities and numerous editions, textbooks, like newspapers and ephemera, are not meant to survive. Older foreign textbooks and practical guides for teaching and learning represent an especially precious category of items. What was meant to be cheaply-produced learning material now becomes invaluable for the simple reason that very few copies survive. One of the most treasured works in our collections is Ivan Fedorov's  Azbuka (shelfmark C.104.dd.11(1)), printed in Lviv in 1574, the first printed and dated East Slavonic primer. This is an extremely rare item - there is only one other recorded copy in the world, at Harvard University Library. 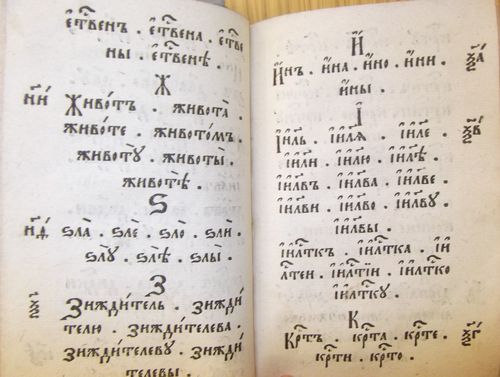 A Slavonic Grammar by Meletii Smotritsky was first printed in 1618-1619 and reprinted several times in the 17th century. Smotritsky made an attempt to codify the contemporary Church Slavonic language as used in the Belarusian, Russian and Ukrainian lands. The book had a significant impact on the development of these languages. In 1648 the grammar was reworked to reflect the norms of the language as used in Moscow at that time. We have two copies of the 1648 edition [shelfmarks 71.d.16 and C.125.d.14]. The latter copy comes from the collection  of Sir Hans Sloane (1660-1753)  and bears notes in Latin, which suggests that the book was used for learning purposes. Interestingly, all notes are made on the page where the  principles of Russian syntax are explained, which probably suggests that the learner was quite advanced. Before belonging to a foreign owner, this copy was in possession of a priest – one Andrei  Petrovich Peresvetov. 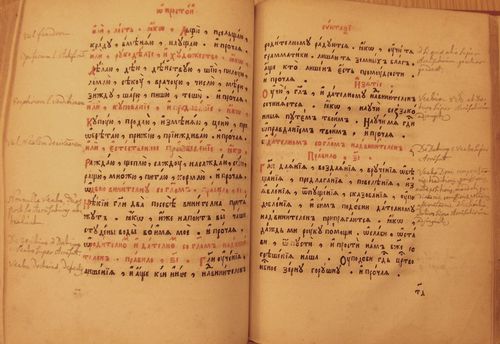 The first Russian textbook on mathematics by Leonty Magnitsky was published in 1703, also in the Church Slavonic language (shelfmark 8531.f.16). It is both an encyclopedia of mathematics which explains its rationale and provides numerous tables, measures and rules, and a textbook with lots of practical 'problems', such as how many bricks are needed to build a wall of certain measurements (see the illustration below), or what one’s debt would be if one wanted a loan at a certain percentage.  The book was published in 2,400 copies and used in schools till the 1750s. 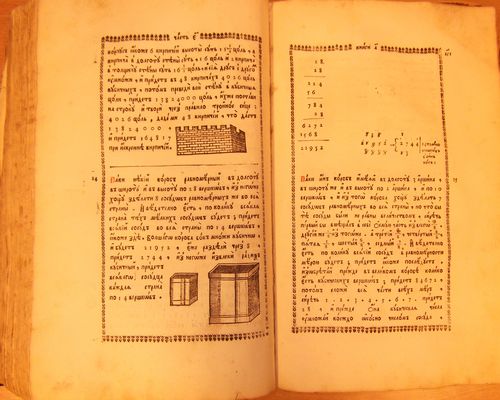 There are more examples of learning and teaching materials from the 19th century in such subjects as languages, history, the Orthodox religion, rhetoric, poetry, literature and law. One of the more curious titles is the book by Ivan Zander Nachatki russkogo iazyka dlia nemetskogo iunoshestva [The foundations of the Russia language for German youths], published in Riga in 1869 [shelfmark 12976.h.18.], which included Russian proverbs with parallel translations. It is very likely that the book was acquired by pure chance, but maybe some British Museum readers used German as a language of instruction while learning Russian, as there were no similar books in English.

Slavonic studies fully emerged in Britain in the 20th century (on the history of learning and studying Russian, see James Muckle. The Russian language in Britain: a historical survey of learners and teachers (Ilkestone, 2008; shelfmarks  YK.2009.a.30298 and m09/.13908 ) and, of course, learning material in English started to be produced in Britain.  In the British Library, we have a nice pocket-size booklet called Russkii Uchenik= The Russian Pupil (Manchester, 1919; shelfmark 12975.a.34). Its author claims that the size is part of his method: “For one thing, you get tired of handling your text-book too often, you find you cannot always carry it about to look at it at odd moments. What is the remedy then? A little, well-printed booklet that you could carry about in your pocket like a letter where words and grammar are arranged in a manner which does not tax your brains in the least but nevertheless enables you to assimilate knowledge in an exceedingly interesting, novel, and attractive manner”. Sounds like an advert of a learning app, doesn’t it? 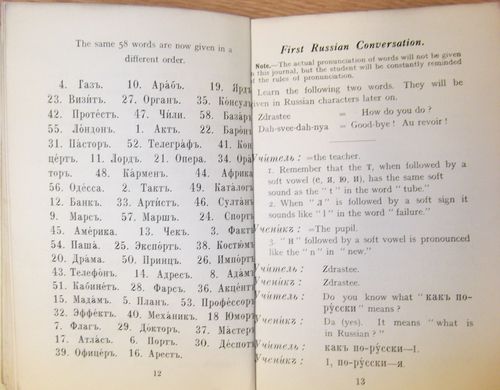 The British Library also holds some Soviet schoolbooks, which might be an interesting resource for historians of the Soviet system of education. And, of course, one can find plenty of curiosities, such as Uchebnik avtoliubitelia [A textbook for the amateur  driver and car owner] (Moscow, 1952; shelfmark 08774.b.3), Uchebnik dlia mladshego veterinarnogo fel’dshera [A textbook for the junior veterinary  practitioner] (Moscow-Leningrad, 1950) and various learning materials for propagandists of atheism, ship’s carpenters, textbooks on logic for secondary schools, and various other subjects. In the atmosphere of Cold War it is not surprising that the British Museum acquired such books as Uchebnik voennoi gigieny [A textbook on military hygiene] (Moscow, 1962; shelfmark 7327.e.45) or Uchebnik angliiskogo iazyka dlia vysshikh voenno-uchebnykh zavedenii [English for Military Highschools] (Moscow, 1957; shelfmark W.P.12521)

At the beginning of perestroika the decision was taken to collect samples of textbooks that would represent the changes in the system of education and in  society, so it is not unexpected that one of examples of school literature of the 21st century is Bukvarʹ shkolʹnika : Putevoditelʹ nachala poznaniia veshchei bozhestvennykh i chelovecheskikh [The Pupil’s primer: the guidebook for learning about things divine and human] (Moscow, 2004; shelfmark YF.2006.b.558).