The winning work, published on the 150th anniversary of D’Annunzio’s birth, was described by Martin Rees, the chair of the judges, as “A biography of an extraordinary man, a repellent man (the judges said), playwright, poet, novelist, war hero, womaniser, nationalist politician, and the man who in many ways invented Fascism. Everything that Mussolini learnt about parades and black-shirts and the extent to which politics is a branch of theatre he got from Gabriele D’Annunzio whose career peaked in 1919 when he led a hundred Italian army deserters into the Croatian town Fiume and tried to seize it for Italy.”

The ensuing flurry in the press predictably highlighted the scandalous and sensationalist elements in D’Annunzio. There was, however, general agreement that though he may have been repellent, profligate and promiscuous, D’Annunzio was never dull and he is, consequently, a splendid subject for a biography.

This is, in fact, the second biography of the poet to have been published in Great Britain in the last 15 years. John Woodhouse’s Gabriele D’Annunzio: Defiant Archangel (Oxford, 1998; BL shelfmark YC.1999.a.3656), adopted a largely chronological narrative approach, from D’Annunzio’s early life in the Abruzzi, his first steps as a society journalist in Rome, his years in France, his activities during the First World War , the invasion and annexation of Fiume (now Rijeka in Croatia) in 1919 when he was associated with the elite Arditi storm troops of the Italian Army, to the final years in the Vittoriale, the hillside estate on Lake Garda where the writer lived from 1922 until his death in 1938, which is now his house-museum and mausoleum. 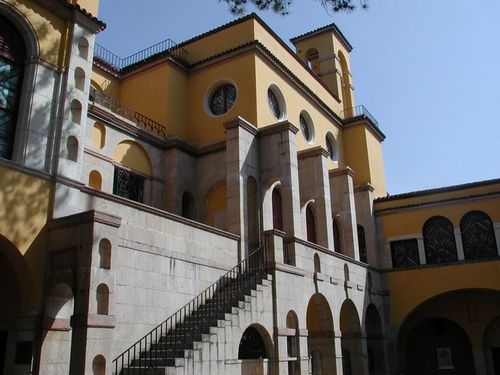 The Vittoriale (photo from Wikimedia Commons)

Woodhouse’s work was the first fully documented biography of D’Annunzio, making use of thousands of newly-catalogued documents (especially those conserved in the Vittoriale) and it attempted to provide an objective and balanced appraisal of the man.

Hughes-Hallett, on the other hand, eschews chronology, adopting a thematic rather than a chronological structure, and a kaleidoscopic narrative technique more common in fiction-writing than in biography. In her own words: “I have raced through decades and slowed right down, on occasion, to record in great detail a week, a night, a conversation. To borrow terms from music … I have alternated legato narrative with staccato glimpses of the man and fragments of his thought” (p. 16).  Unlike the detailed notes and excellent bibliography in Woodhouse, the present work has only a select bibliography and does not include precise page references.

Like Filippo Tommaso Marinetti, the indefatigable promoter of Futurism, D’Annunzio was theatrical, preposterous, charismatic, a great self-publicist and propagandist, a skilful manipulator of the media to ensure reaching a mass audience.  Both men also shared a passion for motor cars and aeroplanes: one of D’Annunzio’s, most impressive wartime exploits was “the flight over Vienna”, a 700-mile round trip he undertook on 9 August 1918 to drop propaganda leaflets on Vienna.

The image of both men has also been tainted by their early association with Fascism, though their relations with Mussolini were often ambiguous. It should also be remembered that, although D’Annunzio had a strong influence on Mussolini’s ideology, he never became directly involved in fascist government politics.

Unlike Marinetti, however, D’Annunzio was a notorious womaniser, who often incorporated details of his love affairs into his works, completely disregarding the feelings of the women involved.  His mistresses included the great actress Eleonora Duse, the ballerina Ida Rubinstein, and  the eccentric heiress Luisa Casati.

Small wonder, therefore, that D’Annunzio’s writings have been overshadowed and compromised, especially outside Italy, by his flamboyant and sensationalist elements in his life. Additionally, his literary reputation suffered by early translations of his works into English that often appeared in bowdlerized versions. A typical example is that of D’Annunzio’s first novel Il Piacere, (Milan, 1889; shelfmark 12471.h.20). This masterly evocation of Rome and Roman high society in the 1880s, much influenced by Huysman’s A rebours, has only been available in English as The Child of Pleasure (London, 1898; shelfmark 12471.k.25), a heavily sanitized version which also omitted many of the original aesthetic reflections that play such an important role in the original. The forthcoming new translation of the novel will hopefully give a fairer idea of the original, one of the great novels of the Decadent movement. It is also hoped that the interest aroused by award of the Johnson Prize to the new biography will prompt further translations of D’Annunzio.

And for those wondering about the title of Hughes-Hallet’s biography, it is a reference to Romain Rolland’s  description of D’Annunzio as a pike – a predatory fish lurking, afloat and still, waiting for ideas on which to pounce, swallow them, and express them better himself, making them his own: a testimony to the wide variety of D’Annunzio’s enormous output. 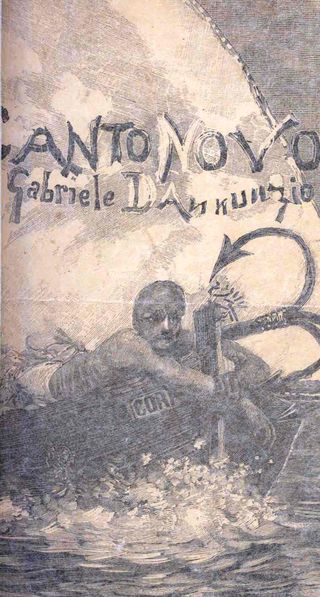