In an earlier blog post I wrote about a remarkable and unique object that Printed Historical Sources and Dutch Language Collections bought with the generous support of the Friends of the British Library.

On 6 November we celebrated this purchase with the Friends, the Dutch Ambassador and some colleagues. Dr. Jan Storm van Leeuwen and Professor Mirjam Foot, renowned  experts on Dutch bookbindings, gave us their ideas on what this strange object might be, followed by a viewing in small groups of the item itself in the finishing studio of the BL’s Conservation Centre , where Book Conservator Doug Mitchell showed his mock-up of the object  especially made by for the occasion and gave a demonstration of gold tooling (described here by Christine Duffy) . 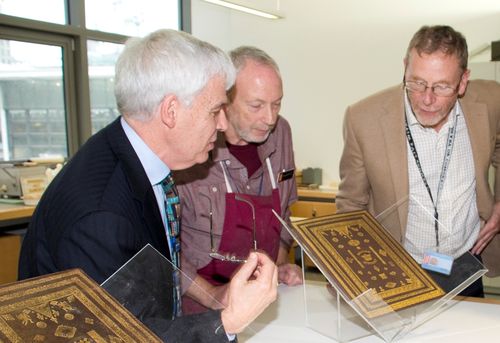 Doug Mitchell (centre) displays his mock-up; the original sample can be seen to the left. (Photograph by Elizabeth Hunter

Meanwhile Conservation Team Leader Robert Brodie entertained guests in the Conservation Centre’s Foyle Room by displaying some of the Centre’s own book decoration tools and answering questions from fascinated guests. There was a real sense of excitement in the air, which made it a very lively and interesting afternoon. Guests offered their own theories about what the object might be and are very interested to hear of any further developments in the research on this item. 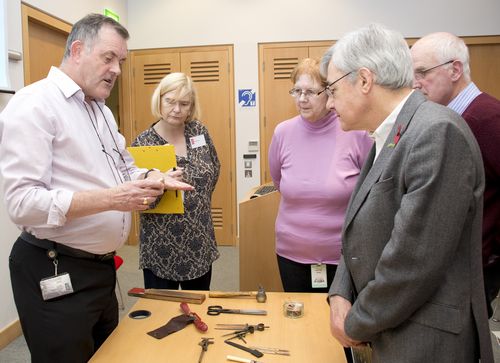 We hope that this event will generate further research interest from the academic, professional and arts world, so that together we may solve the puzzle of the ‘Book Binder’s Specimen. Sample book cover. Utrecht/Amsterdam c. 1730’ (C.188.c.43). It did inspire me to bake and gild some traditional Dutch gingerbread!

For the Love of the Binding: studies in bookbinding history presented to Mirjam Foot, ed. by David Pearson. (London, 2000) 667.u.169 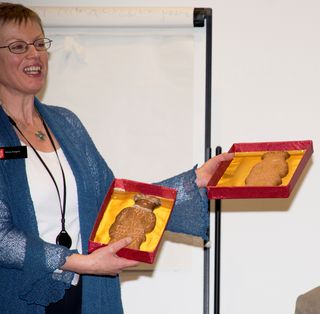