How the Georgian language first appeared in print

After the fall of Byzantium, Georgia was broken into several kingdoms and was encircled by hostile Muslim powers and weakened by constant invasions and internal conflicts. Consequently, in the 16th-17th centuries Georgia was no longer a cultural meeting ground for east and west, but became a country squeezed between the difficult conditions of rivalry between Turkey and Persia for domination over Transcaucasia. The King of East Georgia, Teimuraz I, sent Niceforo Irbach to Italy and Spain as the Georgian envoy to seek allies and to ask for assistance in holding off the Turks and Persians. The ambassadorial mission did not have much political success, but it did bring about a significant cultural event – the printing of the first Georgian book.

During his stay at the Vatican, Niceforo Irbach collaborated with Catholic scholars and missionaries to produce a Georgian-Italian vocabulary, as well as a brief collection of prayers in colloquial Georgian.

The first Georgian books were published by the Propaganda Fide Press of the Sacred Congregation for the Propagation of the Faith which was established in Rome in 1622 for the purpose of spreading Catholicism in non-Catholic countries.

Georgia adopted Christianity in the very early centuries and the resulting Georgian Orthodox Church, founded in the fourth century AD, has been in communion with the Eastern Christian Churches but has never been subject to the authority of the Roman Catholic Church.

A general idea of the political situation in Italy at that time and the status and purpose of the Vatican agencies happened to be of direct relevance to the activities of the Georgian king’s envoy during his stay in Rome. The newly-established Catholic missions required manuals of the foreign language and devotional texts for their operations.

In 1629 the Congregation managed to cast Georgian type in moulds and to issue a ‘Georgian  alphabet with prayers’ that was followed by the publication of the ‘Georgian-Italian Dictionary’.
Achille Venerio, a member of the ‘Propaganda Fide’, sent the printed dictionary with its Georgian alphabet to Pope Urban VIII  along with a ‘Dedication’ in which he described Georgian letters as ‘very refined and beautiful.’ 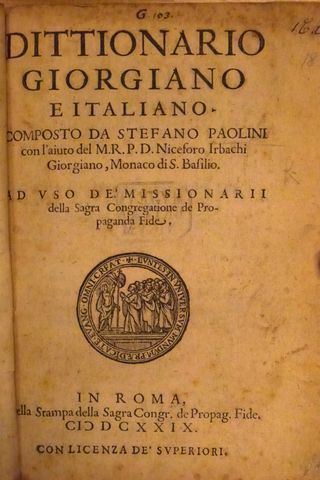 The missionaries were taught Georgian by Niceforo Irbach, who was responsible for the Georgian version of these present works. They accordingly provided a relatively easy first attempt at translation between the two languages.

Alphabetum ibericum, sive georgianum: cum Oratione [Iberian or Georgian alphabet with prayers] (Shelfmark 621.b.4. (12.)) is one of the first of two books printed in Georgian using moveable type. The book includes a table with the Georgian alphabet and the sounds signified by its letters and their Latin equivalents. The text begins with the thirty-six letters of the Iberian or Georgian alphabet, presented in four columns - formation, name (in both alphabets) and force. Some letters have additional italic comments at the side, referring to and giving the same phoneme in other languages including Arabic, Hebrew and Greek, entailing the use of type in 5 completely different alphabets on a single page. The second subsection explains the numerous ligatures when Georgian letters are combined. The third section exemplifies the use of Georgian by setting out the text of The Lord’s Prayer, Hail Mary, Nicene and Apostles’ Creeds, Corporal Works of Mercy, the Seven Sacraments, and the Ten Commandments, concluding with the Canticle of the Virgin Mary. The text is given in Georgian and titles are in both languages, Latin and Georgian. 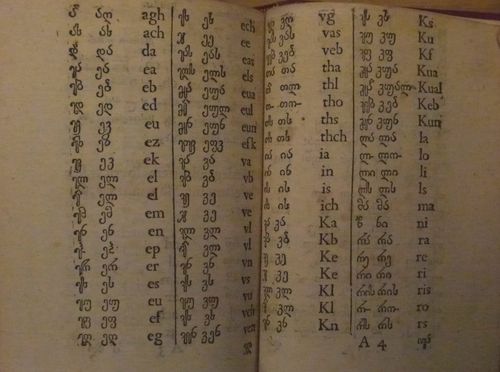 A page of the alphabet with Roman transliteration from Alphabetum ibericum, sive georgianum

Dittionario giorgiano e italiano [Georgian-Italian Dictionary] (shelfmark 70.a.4.), compiled by Niceforo Irbach and the printer Stepano Paolini, contains 3,084 entries written in Georgian letters. The text is printed in three columns: Georgian words in the left column, Italian transliterations (including stress) in the middle column, and an explanation of the meaning of each word in Italian in the right column. The Georgian alphabet and the Latin equivalents of each of its letters appear on pages 1–2. 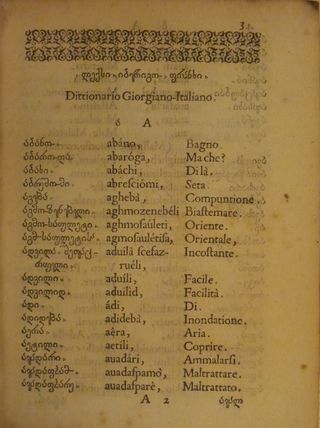