In the course of the 19th century, the British Museum Library gained fame through both the scale and rarity of its ever-growing holdings. However, whilst the staff were valiant in cataloguing what was a tidal wave of acquisitions, they were always few in number and working to make each acquisition available to readers as quickly as possible. The resulting catalogue therefore was characterised by the brevity and terseness of its entries for all but a few works. Regrettable also was the failure sometimes to identify authorship of works of great significance.

The British Library is the approximate successor to the British Museum Library and inherited its catalogue whose entries it is currently trying to enhance. It also has a vast number of attentive and scholarly readers whose knowledge can transform a bare catalogue entry into rich and accurate description and thus correct the defects of the past.

Such has been the case with the seventh of 125 posters bound together in the volume at shelfmark Tab.443.a.3. Since its purchase by the British Museum Library until February 2013, it lay, modestly described and with no author attribution, under the catalogue heading URNES. And then a reader identified its author and informed the British Library, and the importance of this poster was made clear. It is entitled Les Trois Urnes, ou Le salut de la patrie authored by ‘Un voyageur aerien’. Although it is undated and carries neither printer’s name nor place of publication, external evidence allows us to date it to July 1793 and to identify the author as Olympe de Gouges (1748-1793).

The original printed catalogue entry for Les Trois Urnes. You can find the updated and improved record in our online catalogue

Olympe de Gouges had already made something of a name for herself in the late 1780s as the author of several plays inspired by immediate political issues. With the status of citizen which the French Revolution gave her and all others, she gave full rein to her belief in her right to address the most important questions and the most highly placed citizens of the day. Most famous among these addresses is her pamphlet on the rights of women as equal members of the body politic and sociable. In both format and argument, it is structured as the unpublished but necessary complement to the constitution ratified by the Constituent Assembly in 1791. It concludes with a chapter emulating, even in its title, Rousseau’s Social Contract.

Using to the full her legal rights and the political ideals of equality and free speech, Olympe de Gouges became a commentator on and increasingly a critic of the direction of the Revolution whilst absolutely rejecting the political regime that it had replaced. In a series of tracts, she directed her arguments to Queen Marie-Antoinette, to the Army and to the radicalising Society of Friends of the Constitution. In a courageous act of solidarity with the principles supposedly embedded in the Revolution, she even offered herself as defence counsel for Louis XVI. 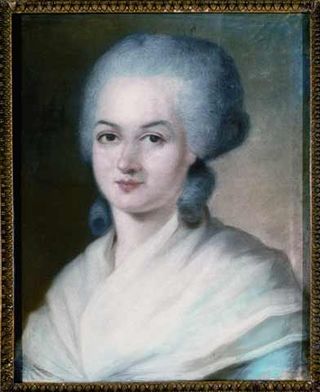 Her final public statement as a free woman was the poster under discussion. In format, it emulates any revolutionary official or government proclamation: it is a large folio sheet, printed on one side only, the title, printed in large, bold capitals, contains a rhetorical flourish, while the text is printed in two vertical columns. Most strikingly and very much drawing attention to itself as not an official publication, is the vividly-coloured paper on which it is printed. 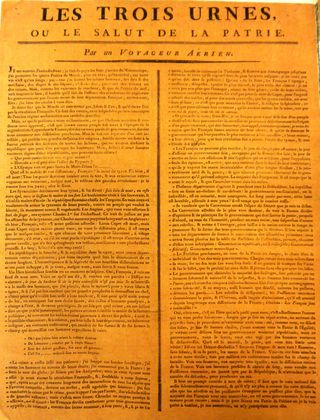 The poster argues the need for a national plebiscite to decide which form of government is most favoured by the French people. The choice is offered between a unitary republic, a federal system or a constitutional monarchy. Even a particular election procedure is described and advocated. The writing is urgent but the authorial identity adopted – a sprite come from mythical foreign parts to solve the dilemmas of humankind – is possibly too flippant, too knowing and altogether too learned to command respect or a hearing during these desperate times when stern slogans and rallying cries were the order of the day. Furthermore, the argument was at odds with itself: monarchy had been equated with tyranny in the first section of the poster so how could any form of monarchical government be other than an infringement of the liberties achieved by the Revolution?

Louis XVI had been guillotined on 21 January 1793, Marie-Antoinette was in prison, the Girondist Deputies in the National Convention, with whom Olympe de Gouges sympathised politically, had fallen and their arrest had been ordered on 13 June 1793. The death penalty was freely used. In addition, France was beset by external enemies, the National Convention admitted no challenge to its sovereign power, and its dominant faction – the Jacobins – made clear the ideological structure of their non-negotiable State in every decree issued: the Republic, one and indivisible. De Gouges’ own arguments concerning the structure of the State belonged to a calmer time. Her publication of them in Les Trois Urnes was exceptionally brave, but suicidally so, and it is hard to believe that she did not know this.

She was quickly identified as the author of the poster, arrested and tried before the Revolutionary Tribunal on a charge of sedition on 2 November 1793, the content of her poster being used as part of the evidence against her. Found guilty, she was beheaded on the guillotine the next day. Marie-Antoinette, the Girondist Deputies and many others had already preceded her.

Her courage lives on as do her words which are increasingly consulted to help us understand the position of women during the French Revolution. Authorship of the British Library’s copy of this poster was identified by researcher Clarissa Palmer who has also informed us of its extreme rarity. It seems that the Revolutionary government destroyed all known copies of it, keeping only the one used during Olympe de Gouges’ trial. That copy is now in the Archives Nationales in Paris. The British Library’s thanks to Ms Palmer are given here.