7 November 2013 marks the 100th anniversary of birth of French writer, philosopher, playwright and activist Albert Camus (1913-1960). It is impossible to speculate how his career in any of these fields might have developed had he not died prematurely in a car accident on 4 January 1960 when a Facel Vega driven by his publisher and friend Michel Gallimard crashed near Sens, killing them both. 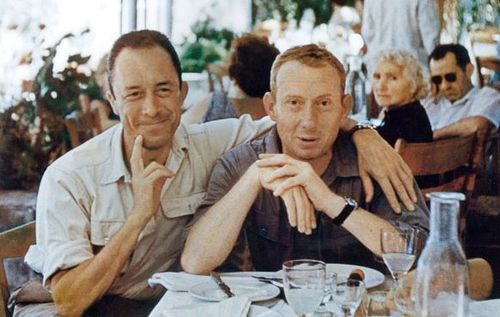 Born in Algiers into a poor family, Camus was brought up by his mother after the death of his father in the Battle of the Marne (1914), and during his years as a student was forced to limit his studies and his activities as a goalkeeper for the university football team Racing Universitaire d'Alger when he developed tuberculosis. Throughout his life his ties to his native Algeria remained strong, and he wrote evocatively of the heat and brilliance of the climate, never more tellingly than in his most famous novel L’étranger (The Outsider; 1942) of which the British Library possesses a first edition (shelfmark W17/9256 DSC), where the relentless glare of the sun is a direct factor in the narrator Meursault’s attack on an Arab which ultimately sends him to the guillotine.

In another novel, La Peste (The Plague; 1947: first edition at shelfmarks 012551.m.30. and W26/4658 DSC), Camus once again sets the action in North Africa as the backdrop for the ethical choices and changes which confront the inhabitants of a small town when a mysterious rat-borne plague suddenly erupts.  The rats have been interpreted by critics as symbols on a variety of levels, including carriers of moral and political corruption as well as an allusion to the compromises for which France was blamed during the German occupation.

Camus’s own political beliefs brought him into numerous conflicts, from his membership of the French resistance cell Combat and editorship of its paper to the outspoken criticism of Communism which led to his expulsion from the party in 1937 and his breach with his fellow-Existentialist Jean-Paul Sartre  in 1951. His vigorous advocacy of human rights encompassed pronouncements on the bombing of Hiroshima, the Hungarian uprising of 1956, and the Algerian war in 1954, and opposition to totalitarianism and the death penalty, which he joined forces with Arthur Koestler  to criticize.

In 1957 Camus was awarded the Nobel Prize for Literature ‘for his important literary production, which with clear-sighted earnestness illuminates the problems of the human conscience in our times’. This is nowhere more evident than in his dramas, which place the moral dilemmas of human existence and the workings of the absurd in a variety of contexts which, from ancient Rome in Caligula (1938) to pre-revolutionary Russia (Les Justes, 1949), frame timeless questions about human guilt and responsibility and make them accessible to all. It is surely no coincidence that Camus and Sartre’s first meeting in 1943 was at a rehearsal of the latter’s play Les Mouches  (The Flies), where Orestes and his fellow-citizens grapple with a symbolic plague no less virulent than that in Camus’s work.

By locating the action of these plays in distant times and places, Camus enables his audiences to enter into it without the limited identification with specific contemporary issues which would have resulted from a modern setting, and stimulates discussion of questions which remain of vital importance a century after the author’s birth. And yet, despite their enduring dramatic power and the serious quality of their content, we may recall Camus’s response when asked by his friend Charles Poncet whether he preferred the theatre to football: he is said to have replied, ‘Football, without hesitation’.