You probably know Rembrandt’s ‘The Anatomy Lesson of Dr Tulp’. Painted in 1632, it show Dr Nicolaes Tulp, praelector of the Amsterdam Surgeons’s Guild, dissecting the corpse of Aris Kindt (Adriaen Adriaenszoon), who was executed for killing a man in the course of stealing a coat. Dr Tulp is addressing seven beruffed gents, one of whom is taking notes. With his right hand he is securing the flexores digitorum with his forceps.  His left hand is raised to chest height in a modest pose of explication.

You may not know:

It has 23 plates showing various grisly parts, but what catches my attention is the engraved frontispiece, signed ‘ F. Mathias Irala inv. et sculp.’.  (That is, Mateo Irala both designed and engraved it). 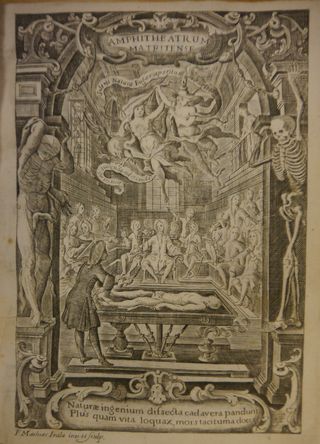 Not for ‘doctor don Martín Martínez’ grubbling round in the innards of a corpse, possibly that of a lowly criminal. He leaves that to foreigners like Dr Tulp. In the ‘Amphitheatrum Matritense’ [of Madrid] Dr Martínez has a man to do that for him, leaving him free to point in lordly fashion at salient features with an outstretched finger in a pose reminiscent of that of a Roman general. Tulp stands up and Martínez sits down. The Dutch audience strain their necks to see; the Spanish students point  their fingers in rhetorical fashion.

Hands-on experience apparently still plays only a small part in the education of doctors in Spain in our own time: I understand they study largely with books.  By the way, in the etching of Rembrandt’s picture by Johannes de Frey (Baillieu Library Print Collection, University of Melbourne) a folio book has appeared in the bottom right-hand corner, so learning and experience both have a role to play.

It’s tempting to think of these two images as typifying practical Protestantism contrasted with theory-driven Catholicism, but we must resist the temptation. There was, for example, no Catholic ban on the dissection of corpses. A fairer contrast would I think be nation-based: Dutch versus Spanish, not Protestant versus Catholic.