Join the British Library & British Museum Singers for a programme of Christmas Music and Popular Songs. This concert has become an annual fixture and, as always, the programme will consist of a sprinkling of European Christmas music including items sung in the original French, German, Spanish, Czech, Polish and Russian alongside a generous helping of familiar English carols and popular songs from all ages. The concert will be conducted by Peter Hellyer. 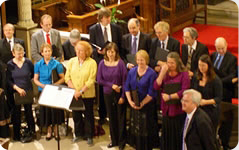 The Polish carol to be performed in the concert is ‘W zlobie lezy’ (‘Jesus lying in the manger’, better known to English-speakers as ‘Infant holy, infant lowly’). It is believed that this carol originated in the 17th century and it is attributed to Piotr Skarga, a Polish Jesuit, preacher and the leading figure of the Counter-Reformation. The music is based on the polonaise composed for the coronation of King Ladislaus IV Vasa.

‘Il est né, le divin enfant’ (‘He is born, the divine child’) is a traditional French carol,  which was first published in 1862 in a collection of Christmas carols entitled Airs des noêls lorrains compiled by a church organist, Jean-Romary Grosjean. And the Austrian carol ‘Stille Nacht’ is, of course, familiar in both its original German, and in English as ‘Silent Night’; during the First World War, in the Christmas truce of 1914 German, English and French soldiers are said to have sung it together, all in their own languages, across the lines.