Coming to England with Alfred Kerr

2013 has seen many well-deserved tributes on the 90th birthday of the children’s writer and illustrator Judith Kerr. Although I never encountered her wonderful picture books as a small child, when I was about 10 I read her novel When Hitler Stole Pink Rabbit which tells the story of a family exiled from Nazi Germany. I have loved it ever since, and as an adult I still find that it and its two sequels reward re-reading.

I knew that the novels were based largely on the author’s own experience and that she, like Anna in the books, was the daughter of a famous writer. As a student reading German I occasionally wondered who this writer was; the name Kerr never appeared on my reading lists or on the shelves of the university library. But I didn’t pursue the question until a couple of years later when, working in what was then the Institute of Germanic Studies Library, I came across a book called Ich kam nach England by one Alfred Kerr. In the opening paragraphs the author describes fleeing Berlin with a high fever and living in Switzerland and Paris before coming to England. A little further on he writes that, if the family had stayed in Berlin “my son would never have won the Prix d’excellence at the Lycée Michelet …[and] my eleven-year old daughter would never have said … ‘Daddy, it’s wonderful to be a refugee.’” (p. 26). All this I recognised from When Hitler Stole Pink Rabbit: these children were the ‘Anna’ and ‘Max’ of the books, and the author was their father.

But he was, of course,  much more too: Alfred Kerr (1867-1948) was best known as a brilliant and influential theatre critic but he was also a poet and editor and wrote about a range of political and cultural topics and about his travels in Europe, America and Africa. He knew many of the major cultural and intellectual figures of his day and was indeed counted among them: the list of contributors to a ‘Book of Friendship’ published in Kerr’s honour in 1928 reads like a who’s who of contemporary German letters. Kerr was outspoken in his opposition to the rise of Nazism, and it is proof of the influence of his writing and opinions that his arrest was ordered as soon as Hitler  came to power and that his books were among those publically burned in May 1933. Fortunately Kerr was forewarned of the planned arrest, and he and his family were able to escape in time. From his exile he published a collection of  attacks on Germany’s new rulers entitled Die Diktatur des Hausknechts (‘The Dictatorship of the Servant Boy’). 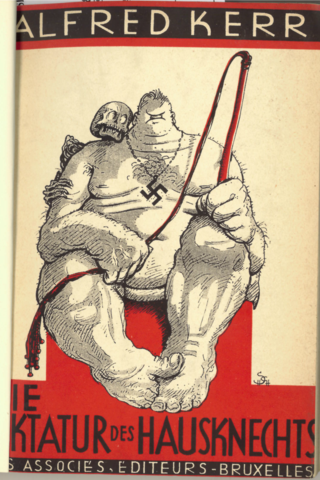 Ich kam nach England is not a straightforward autobiography or diary but a series of impressions and sketches of England as seen through the eyes of an outsider. Sometimes Kerr comments with wry humour on English manners and customs (such as the arcane traditions of his son’s boarding school or the confrontational language of MPs in the House of Commons), but he also takes a serious critical look at the country and is often concerned at the apparent blindness of many of its people towards the true state of affairs in Germany; he is bitterly disappointed, for example, when his friend Bernard Shaw expresses admiration for Hitler. However he ends, writing in the dark days of 1940, by praising England as the country which “has saved humanity for humankind – from Hitlerism which is the cruellest form of idiocy given life.” (p. 199).

The book is written in Kerr’s typical highly accomplished and individual style with brief and often aphoristic sentences combined into short, numbered paragraphs; he frequently incorporates dialect or foreign words or phrases, quotations and snatches of conversation. It’s a difficult style to translate and his work is therefore little known outside Germany - which is one of the reasons why, despite his many years in England, Kerr found it hard to make a living as a writer here.

As far as I can discover, to this day none of his works have been translated into English. It would be wonderful if a brave translator could take up the challenge with Ich kam nach England for a start, and introduce Alfred Kerr also to a nation already brought up on his daughter’s books.

Kerr, Judith, Out of the Hitler Time (London, 2002) H.2002/4250 (An omnibus edition of the three autobiographical novels, When Hitler Stole Pink Rabbit, Bombs on Aunt Dainty, and A Small Person Far Away)