The Latin Dialogue of Solomon and Marcolf dates back to the 11th century. Solomon appears in his traditional guise of the sage, uttering dicta of impeccable orthodoxy and solemnity. The peasant Marcolf lowers the tone; he ripostes with earthy, carnavalesque sayings:

I see Marcolf’s banter as no more threatening to the status quo than the schoolboy parodies of my childhood: ‘Little things please little minds.’ ‘And little trousers fit little behinds.’

Solomon and Marcolf was translated into pretty well all the European languages (see Ziolkowski). But nothing has survived in Spanish or Catalan, so far as I know. It may well be that such texts existed once. In fact, the shade of Marcolf can be perceived in the Llibre de tres (Catalan, 14th century). There, beside the cynical but sententious ‘Tres condicions són de persones qui poden dir falsies a lur guisa: gran senyor denant sos vassals e veyls denant jóvens e qui parla de luny terra.’ (no. 160) [Three conditions of persons can say falsehoods at will: a great lord before his vassals, and old people before the young, and he who speaks of distant lands], we find the earthy ‘Tres coses fa la oreneyla ensemps: vola, caga, menja’ (no. 107) [The swallow does three things together: flies, s***s and eats.]

In the woodcuts of Solomon and Marcolf, Marcolf looks very like Aesop. You may know Velázquez’s painting of Aesop in the Prado, which to my eye looks very much like the woodcuts. Aesop looks like he was done from the life. Did the master scour the streets of old Spain until he came upon someone who fitted the part? 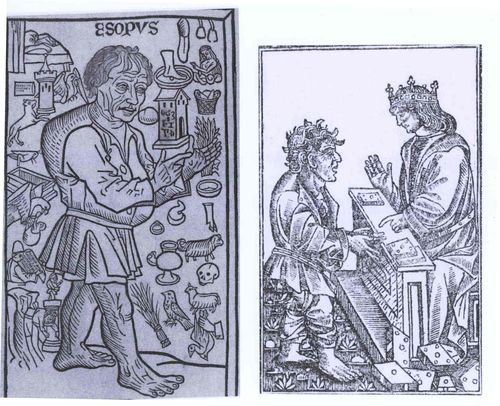 Aesop (left, from an edition of the fables published in Basel, ca. 1489; British Library G.7831) and Marcolph with Solomon (right, from The dialogue or communing between the wise King Solomon and Marcolphus, ed. by E. Gordon Duff (London, 1892) British Library 12204.e.15)

There may be a subtle reflection of Solomon and Marcolf in Don Quixote and Sancho Panza. Don Quixote is in most respects a clean book, particulary if you compare it with Rabelais. Quixote himself is famously high-minded. Sancho is a man of the people – in some senses he is the people – but his earthiness is healthy rather than destructive. When he says to Quixote, ‘the dung of your words has fertilised the barren ground of my understanding,’ (II, 12) he’s paying his respects to high culture and acknowledging that dung is a valuable commodity to a farmer.

In Don Quixote Sancho is famous for spouting proverbs. (There was a tradition of books of Sancho’s proverbs.) But Cervantes, so far as we can divine his intentions, isn’t opposed to such folk wisdom but rather to the excessive use of it to no particular purpose. In a favourite passage of mine, Quixote demonstrates that he is fluent in Sancho’s language (II, LXVII):

“A truce to thy proverbs, Sancho,” exclaimed Don Quixote; “any one of those thou hast uttered would suffice to explain thy meaning; many a time have I recommended thee not to be so lavish with proverbs and to exercise some moderation in delivering them; but it seems to me it is only ‘preaching in the desert’; ‘my mother beats me and I go on with my tricks.’”
“It seems to me,” said Sancho, “that your worship is like the common saying, ‘Said the frying-pan to the kettle, Get away, blackbreech.’ You chide me for uttering proverbs, and you string them in couples yourself.”
“Observe, Sancho,” replied Don Quixote, “I bring in proverbs to the purpose, and when I quote them they fit like a ring to the finger; thou bringest them in by the head and shoulders, in such a way that thou dost drag them in, rather than introduce them; if I am not mistaken, I have told thee already that proverbs are short maxims drawn from the experience and observation of our wise men of old; but the proverb that is not to the purpose is a piece of nonsense and not a maxim.”

Sir Walter Scott in The Talisman (ch. XI) describes the ‘Spruch-Sprecher’ and ‘Hoff-Narr’, servants of the court of Leopold, Grand Duke of Austria, contemporary of Richard I:

… his SPRUCH-SPRECHER – that is, his man of conversation, or SAYER-OF-SAYINGS – who stood behind the Duke’s right shoulder.
This personage was well attired in a cloak and doublet of black velvet […] bearing a short staff to which also bunches of silver coins were attached by rings, which he jingled by way of attracting attention when he was about to say anything which he judged worthy of it. This person’s capacity in the household of the Archduke was somewhat betwixt that of a minstrel and a counsellor. He was by turns a flatterer, a poet, and an orator; and those who desired to be well with the Duke generally studied to gain the good-will of the SPRUCH-SPRECHER.
Lest too much of this officer's wisdom should become tiresome the Duke’s other shoulder was occupied by his HOFF-NARR, or court-jester, called Jonas Schwanker, who made almost as much noise with his fool’s cap, bells, and bauble, as did the orator, or man of talk, with his jingling baton….
Sometimes they became rivals for the conversation, and clanged their flappers in emulation of each other with a most alarming contention; but, in general, they seemed on such good terms, and so accustomed to support each other’s play, that the SPRUCH-SPRECHER often condescended to follow up the jester’s witticisms with an explanation, to render them more obvious to the capacity of the audience, so that his wisdom became a sort of commentary on the buffoon's folly.  And sometimes, in requital, the HOFF-NARR, with a pithy jest, wound up the conclusion of the orator's tedious harangue.

And what are Blackadder and Baldrick but but  modern-day versions of Solomon and Marcolf?