Anglo-German centuries: a 'History in Objects' for 2014

The British Library’s current major exhibition, Georgians Revealed, marks the accession of the Hanoverian Dynasty to the British throne in 1714, ushering in the Georgian age. This is one of a number of events in both Britain and Germany  celebrating this anniversary, while later in the year both countries will also commemorate the centenary of the outbreak of the First World War.

The 200 years between these dates saw the growth of a sizeable German community in Britain and of significant political, cultural and personal links between the two countries (or between Britain and the various states which made up Germany for much of the period) and their peoples.

Of course there had been links between Britons and Germans long before 1714:  the British monarch is still known as ‘Defender of the Faith’ because of Henry VIII’s engagement with Martin Luther, and the Steelyard, headquarters of the Hanseatic League in mediaeval  London, is commemorated to this day by a street name and plaque.

However, the formal political union between Britain and Hanover from 1714 to 1837, the  political and dynastic ties that persisted into Victoria’s reign and the growing influence of German culture and science in 19th-century Europe made for a different and closer relationship. And while 1914 by no means marked a completely clean break, for the rest of the 20th century Anglo-German relations would be cast in a very different mould from that of the Georgian and Victorian eras.

So, to mark the joint anniversary of 1714 and 1914 we will be presenting over the course of this year a series of themed blog posts examining Anglo-German relations specifically between those two dates through different items from the Library's collections: a kind of ‘History in Objects’ like those promoted by the British Museum in recent years. Some posts will relate to well-known figures and events, although their Anglo-German connections might be less familiar. Others will highlight lesser-known stories, such as the trades followed by German immigrants in Britain, German influences in the history of the Library’s own collections, or the huge celebration of Friedrich Schiller’s 100th birthday held in London. 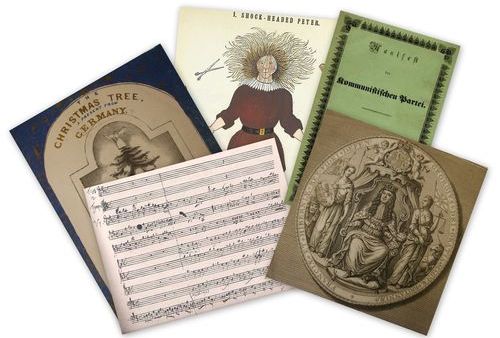 Some collection items with an Anglo-German story to tell...

We hope you will join us over the coming year to find out more and explore two centuries of Anglo-German ties.