One Family’s Story in Bobruisk during the Second World War

The population of Belarus suffered terribly during the Second World War, but the biggest losses occurred among the country’s Jewish communities.  Even now, nearly 70 years after the war, there are still no official statistics for the numbers of dead – only estimates. We can only imagine how terrible it was for civilians to survive, and how hard it was to recover and to rebuild their lives after the war.

January 27 is Holocaust Memorial Day in the United Kingdom to remember all innocent victims.  I decided to tell the story of my good friend Lily Samuel-Podrobinok and of her parents’ families, who were evacuated by train to the Ural Region and  escaped the Holocaust.

The family of Lily’s father Meir Podrobinok (born 1934) comes from the city of Bobriusk.  Meir’s mother Leah, a housewife, and his father Zalman, a milkman, were both born there. Lily’s mother Nina Leokumovich (born 1942) and her family come from Zhlobin in  Gomel Region and later relocated to live and work in Bobruisk. Nina’s father Abram became very famous for his excellent work as a vet, and her mother Ronia was a hospital nurse.

Bobruisk (or Babruisk)  is a city in the Mogilev Region situated on the river Berezina. Established in mediaeval times, it is first mentioned in a document of 1387. Anna Vygodskaia described Bobruisk as “a sleepy provincial town, whose inhabitants sealed themselves off from the rest of the world”, until in the 1870s the railway connected Bobruisk to Minsk, Vilno, Gomel and Libava (Latvia). Being in close proximity to Russia and Poland, Bobruisk quickly established itself as a trading centre.

The first mention of the Jewish community in historical documents was in 1508. Just a few families were living there, but by 1766 the community had grown to 395. The biggest rise in population was in the 19th century: by 1897 the total population of the city was 28,764, of whom 71% (20,438) were Jewish. Bobruisk came to be called “the city of 40 synagogues” – there is only one left today. 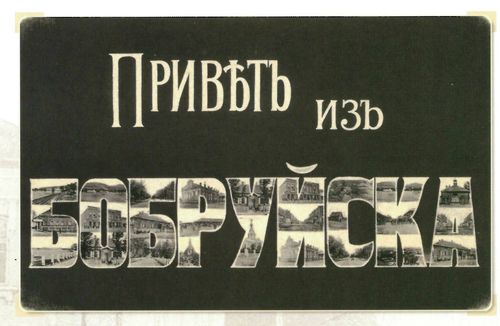 By 1917 there were 42 synagogues, a Jewish school and hospital, cinemas, a drama club and a Jewish library, one of the four largest of its kind in the Russian Empire.  Bobruisk was also a centre of book publishing in Yiddish, Hebrew and Russian; the best-known publisher, Iakov Gunzburg (Yaaḳov Ginzburg), was active until 1928. There were a number of Jewish newspapers (Bobruiskii listok, Bobruskie otkliki and Bobruiskii ezhenedelnik) and Zionist and other political organizations. The most famous was BUND, which also published political literature.

Germany attacked the Soviet Union on 22 June 1941; Minsk, the capital of Belarusian Soviet Socialist Republic, was occupied on 26 June, but the Mogilev Region and Bobruisk were defended by Red Army soldiers and military cadets until the town was taken by German soldiers on 28 July. There was only a short time for the residents to make one very important life-changing decision: to leave their home town or to stay. 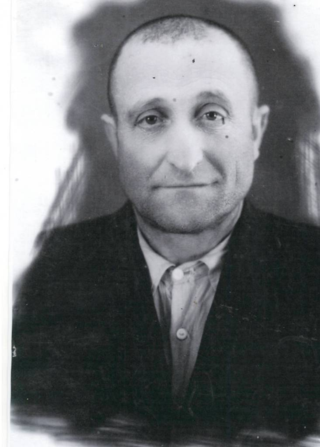 Zalman Podrobinok, photo taken after the war [by kind permission of Lily Samuel-Podrobinok]

Lily’s grandfather Zalman had joined the Red Army infantry. In 1943 or 1944 he was injured and spent some time in hospital; he was reunited with his family through the Red Cross. The rest of Lily’s family on both sides decided to leave Bobruisk. With the Germans bombing and German paratroopers already in the city, there was total chaos and confusion among the population. The family walked 60 km to Rogachev (Rahachow) and then on to Propoisk (today known as Slavgorod), where they safely boarded an open-carriage train to Russia.

At one point the family almost became separated. Somebody saw the young children walking and offered the family a lift to the railway station; the mother helped the children in, but there was no more room, so the car left without her. The children decided they didn’t want to travel alone, so got out and ran back to find their mother. Luckily the family were reunited, and a train took them to Cheliabinsk.

With the outbreak of war the small Russian town of Cheliabinsk had suddenly grown into a big industrial centre with lots of workers, factories and plants evacuated there. Zalman Podrobinok worked at the military plant and Abram Leokumovich worked as a vet, helping to look after the horses used by the Red Army.

The occupation of Belarus lasted four long years. During Operation Bagration Belarus was liberated on 4 July 1944; Bobruisk had been liberated in June 1944 by the 1st, 2nd and 3rd Belarusian fronts and 1st Baltic front.

Under Nazi occupation there were 260 internal camps in Belarus and 296 Jewish ghettos, of which 36 were in the Mogilev Region.  209 cities and towns were destroyed and 627 villages burned to the ground; 158 were never repopulated. The village of Khatyn  is a symbol and memorial of all the burned villages in Belarus.

In October 1941 prisoner of war camps were set up in Bobruisk and a Jewish ghetto nine kilometres away in the village of Kamenka, where more than 25,000 people were imprisoned, not only from Bobruisk, but later in 1942 prisoners were relocated from the Warsaw Ghetto.   Altogether, by the end of the German occupation more than 40,000 prisoners of war and 40,000 civilians had been killed in the Bobruisk area.

There are 572 Jewish Holocaust memorials and monuments in Belarus, and 72 memorials thanks to generous donations from World Jewish Relief (WJR) and the Simon Mark Lazarus Foundation, UK.

Lily’s family returned to Bobruisk in 1946, although some families decided to stay in Russia; some members of Lily’s own family stayed in Cheliabinsk. Coming home again was hard, and it took a long time to settle back into normal life. Zalman and Leah Podrobinok’s home had been destroyed by heavy bombing, so they took out a mortgage to rebuild their house.

Abram and Ronia Leokumovich also came to Bobruisk in 1946 and, because there was a shortage of vets, Abram was offered his job back together with very comfortable office accommodation. 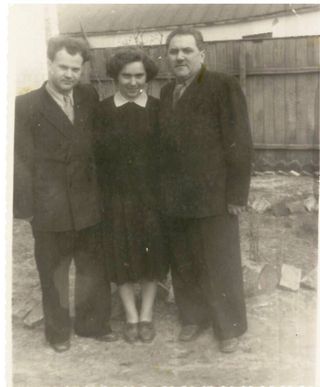 Efim, Nina and Abram Leokumovich in a photo taken after the war in Bobruisk [by kind permission of Lily Samuel-Podrobinok]

Both families rebuilt their lives and gave all their children a higher education. In 1990 they decided to emigrate to Israel, but continue to visit Bobruisk as often as possible.

The Jewish community in Bobruisk was revived when a young rabbi from Israel came with his family and restored the synagogue. Today a Jewish community of around 4,000 remains, and the future looks promising!

I would like to thank Lily and her family for their help!