The Panizzi Lectures, based upon the original researches of eminent scholars of the book, have been delivered annually since 1985. They cover a wide and international subject range within the overall umbrella of historical bibliography. In this year’s series of three lectures, on Monday 6, Tuesday 7 and Thursday 9 January 2014, Professor Robert Darnton will look at how censorship operated in three different periods and countries - Bourbon France, Imperialist India, and Communist Germany. 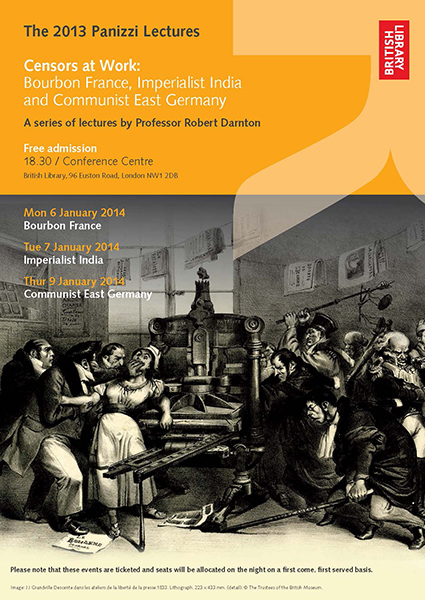 The image used in the publicity for the lectures (above) is a detail of a satirical print by J. J. Grandville, published in November 1833 in L’Association mensuelle, a special edition of Charles Philipon’s La Caricature.  It shows King Louis Philippe and his entourage raiding the workshop of the Freedom of the Press. The king is seen on the left, brutally trying to silence a woman worker (a personification of  Freedom of the Press), his right foot treading on a paper called  Le Bon Sens (‘Common Sense’). Other officials are depicted attacking the press itself, or tearing newspapers. Hanging above  are issues of anti-Government papers like  Le Charivari  and  La Caricature, the latter showing a pear - a notorious caricature of the head of Louis-Philippe, created  by Philipon in 1831 and subsequently used by artists (notably Daumier) to represent the king.

The three lectures are:

1.  Monday 6 January 2014. Bourbon France: Privilege and repression.
Censorship under the Ancien Régime in France was positive: a royal endorsement of a book’s quality in the form of a privilege. Books that could not qualify for privileges circulated in a vast underground trade, which a specialized literary police attempted, with limited success, to repress.

2.  Tuesday 7 January 2014. British India: Liberalism and Imperialism.
After the rebellion of 1857, the British masters of India realized they understood little about the country they had conquered and therefore produced extensive surveys of “native” literature. The surveys reveal the nature of imperialist discourse about Indian literature, and they provided material for the repression of everything deemed seditious after the partition of Bengal in 1905.

3. Thursday 9 January 2014. Communist East Germany: Planning and Persecution.
In Communist East Germany, censorship meant “planning,” a literary version of social engineering.  Every book had to be incorporated in an annual plan after a complex process of negotiation and compromise, which made authors complicit with censors and led to struggles that reverberated up to the top of the power structure. 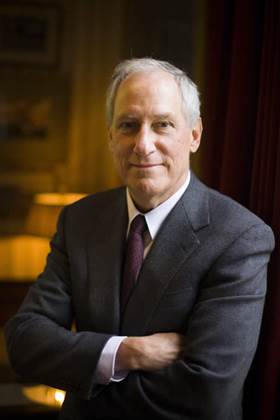 All lectures will be in the Lecture Theatre of the British Library Conference Centre, 96 Euston Road, London NW1 2DB.  18.30-19.30. Admission is free and  the lectures are not ticketed; seats will be allocated on a first come, first served basis.

The last lecture will be followed by a drinks reception to which all are welcome.