The ‘Prize Papers’: letters as loot

Five sea-battles were fought between the Dutch and the English in the North Sea and elsewhere in the world’s oceans during the 17th and 18th centuries.

The National Archives in Kew, London, houses the High Court Admiralty archives. These  not only contain papers relating to the jurisdiction of the courts but also ships’ books and papers, ships’ logs and documents related to prizes. The term ‘prize’ refers here to a ship’s cargo captured in naval warfare. In 1980 a Dutch researcher stumbled upon archival material at Kew containing papers from Dutch prizes 1652-1832. These ‘Prize Papers’ consist of 1,100 boxes containing about 38,000 letters. Of these 16,000 are private letters. Some of the letters had never even been opened!

An index to the contents of 700 boxes in the Prize Papers has been made available online. This free resource also contains digitised images of the letters.

In 2004 the national library of the Netherlands, the Koninklijke Bibliotheek, started a project called ‘Sailing Letters.’ This project resulted in the publication of a series entitled Sailing letters journaal. The British Library has purchased all titles in this series. Each volume consists of essays written by scholars and specialists in their field. In their contributions they analyse letters which are grouped around a common theme.

De dominee met het stenen hart en andere overzeese briefgeheimen (Zutphen, 2008; shelfmark  YF.2009.a.19867) is the first volume in this series. The letters in this volume were written in the second half of the 17th century. The authors and addressees lived all over the world, from Batavia and Curaçao to Hoorn and Zierikzee. The contents of the letters cover all sorts of occasions from the murder of the De Witt brothers, a New Year’s poem, an issue of a newspaper in Suriname, the Surinaamse Courant of July 3, 1782 to news items from Batavia, Indonesia, and the last page of a ship’s logbook.

The third volume entitled De voortvarende zeemansvrouw : openhartige brieven aan geliefden op zee (Zutphen, 2010;  YF.2011.a.11834) presents letters written by two wives to their husbands De Cerff and Buyk  who were sailors employed by the Dutch East India Company. The letters are not only of interest to historians but also to linguists. Two further volumes in the BL’s collection are: De gekaapte kaper : brieven en scheepspapieren uit de Europese handelsvaart (Zutphen, 2011; EMF.2012.a.51) and De smeekbede van een oude slavin : en andere verhalen uit de West (Zutphen, 2009; EMF.2010.a.5). The latter gives the reader some startling examples of everyday life in the colonies such as the letter written by Wilhelmina, an elderly lady who once was a slave or the letter written by a medical doctor in charge of the slaves in a plantation.

In 2013 appeared the fifth and last volume in the series: Buitgemaakt en teruggevonden : Nederlandse brieven en scheepspapieren in een Engels archief. Chapter 3 addresses the question of whether any archives in the Netherlands hold  letters seized from English ships captured by the Dutch. 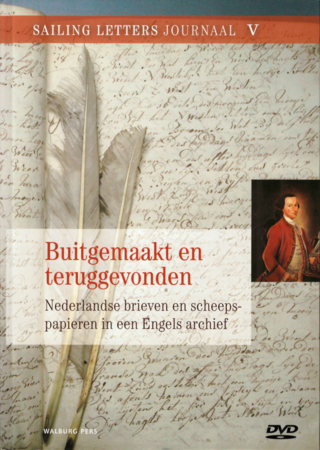 As a cataloguer, I regularly stumble upon my own ‘prizes’ which experience I have tried to share in this blog.