The life and travels of a Tsar - and of a manuscript

When my predecessor retired as curator of the British Library’s Russian collections  I took on responsibility for some rare materials which she had not finished working on. One of these was a manuscript in Russian created in the 18th century. It is in in a very good condition with a fair leather binding and the title ‘The Life of Peter the Great’ is embossed on the spine. The manuscript was created, according to the scribe’s note, as a presentation copy “on the 27th [June] in the year 1765” to celebrate “the victory given by God to glorious Tsar of Russia Peter the Great over Swedish King Charles XII in the Poltava Battle in 1709”. In this note the scribe calls himself “Fedor, son of Ivan Amisimov of the town of Kungur” (located in the Ural mountains in the Perm region).

On verso of the last leaf there is a previous owner’s note written in the 19th century:  “Monday, 4 November 93. My dear brother Sania, I’m sending you this book as a token of my memory. I’m writing to you, forever beloved brother, maybe this is the last time I’m writing to you. Goodbye, my dear, not much left (?) of your money, write back. Your sister Aleksandra Kutalova, 13 October 1893”. 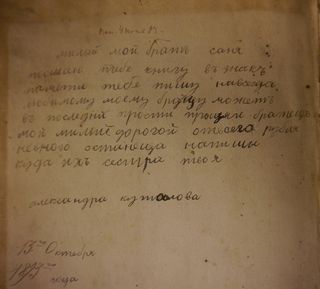 On the Internet I found photographs of several members of the Kutalov family taken in a Kungur photo studio in the first half of the 20th century. One, taken in 1927, portrays two brothers, Boris and Aleksandr Aleksandrovich Kutalov. They are most certainly the sons of Aleksandr Vasil’evich Kutalov (1869 or 1870–1918)], the “dear brother Sania”, who was presented with this manuscript. Information which I found on an Internet forum for the history of Kungur confirmed my guess, as a local historian mentioned that he had seen birth records for a girl called Aleksandra born to the Kutalov family in 1874. These findings suggest that until the end of the 19th century the manuscript was still held in Kungur or nearby.

The manuscript contains the ‘Account of travel to Europe’ commencing with the words: “The trip started in Moscow.” In the late 18th century this was thought to be written by Peter the Great himself and was better known as ‘The Travel Accounts of the Grand Person’. This text was first published in St Petersburg in 1788 under the full title Zapisnaia knizhka liubopytnykh zamiechanīĭ velikoĭ osoby, stranstvovavsheĭ pod imenem dvorianina rossīĭskаgo posol’stva v 1697 i 1698 godu  (‘The notebook of curious accounts of the Grand Person who travelled  incognito under the name of a Russian nobleman with the Russian Embassy in 1697 and 1698’), held at British Library shelfmark 1427.c.9.(1.).

However, the greater part of the manuscript is taken up by the text ‘The Life of Peter the Great’. This is a Russian version of the biography Vita di Pietro il Grande, Imperator della Russia; estratta de varie Memorie publicate in Francia e in Olanda (Venice, 1736; British Library 1487.a.32.),  a compilation from several sources, initially written by an Italian author, Antonio Catiforo, and published in eight editions between 1736 and 1806. The text was translated into Russian by Stepan Ivanovich Pisarev (1709-1775) who served in various state offices. Parallel to his career as a civil servant, Pisarev was interested in literary translation, and many of his translations were published in numerous editions. He translated the Vita di Pietro il Grande in 1743 at the request of Empress Elizaveta Petrovna. 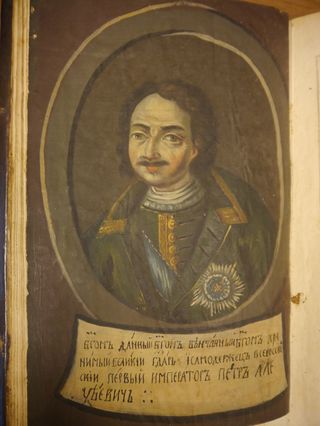