The recent release of political prisoners in Russia brings to mind the long struggle for human dignity and freedom in the former Soviet Union. Each year during the celebrations of the Orthodox Christmas many Ukrainians and connoisseurs of poetry worldwide remember the birth of the major Ukrainian poet and dissident Vasyl Stus, born on Christmas Eve 1938. Yet Vasyl Stus was less lucky than Mikhail Khodorkovsky: he died aged 47 on 4 September 1985 (Perestroika had already begun!) in labour camp 36-1  near the village of Kuchino in Perm Krai. Vasyl Stus was sentenced for the second time in 1980 to ten years of forced labour and five years of exile under Article 62 (‘anti-Soviet agitation and propaganda’).

In January 2008, in independent Ukraine, to mark the 70th anniversary of Vasyl Stus’s birth, Ukrposhta issued a commemorative  stamp depicting the labour camp in which the poet was writing and translating (the picture below from Wikimedia Commons). The book of his last poems entitled Palimpsesty (Palimpsests) was first published in Switzerland (Bern, 1986; British Library YA.1988.a.9200)

The ‘crimes’ of Vasyl Stus were quite different from those of the modern-day prisoners in the Russian Federation. The Canadian writer of Ukrainian descent Myrna Kostash, in her fictional biography of Vasyl Stus ‘Inside the Copper Mountains’,  describes the events of his rebellion in 1965:

There were several hundred packed into the Ukraina cinema in downtown Kyiv the day that the new Sergei Paradzhanov film, Shadows of Forgotten Ancestors,  premiered. The word had gone around that ‘something was going to happen.’ After the screening, the journalist Viacheslav Chornovil and the critic Ivan Dziuba strode to the stage, grabbed the microphone and denounced the recent arrests of artists and intellectuals, their colleagues and friends, who had been protesting publicly the Russification of Ukrainian culture. The plainclothes police in the audience did not let Dziuba finish speaking but switched on sirens to drown out his words and then chased him off the stage. Vasyl Stus, the writer of a handful of published poems, stood up from the floor and shouted out a challenge to the crowd:  ‘All those against tyranny, rise up!’ (from The Doomed Bridegroom, Edmonton, 1998).

Vasyl Stus spent his school years in the Donetsk region of Ukraine. He studied at Donetsk university from 1954-1959. His first poems appeared in the popular newspaper Literaturna Ukraina (‘Literary Ukraine’) in 1959. Then in 1963 a substantial selection of poems was published in the literary magazine Dnipro (‘Dnieper’;  P.P.4842.dms). In 1964 he was admitted to post-graduate studies at the Shevchenko Institute of Literature in Kyiv and a year later was appointed as a senior academic assistant in the State Historic Archives.

The protest in 1965 in the cinema did not go unnoticed by the Soviet authorities. The first arrest and imprisonment followed in January 1972. On 7  September of the same year Stus was convicted and sentenced to five years of forced labour in a Special Regime camp in the Mordovian ASSR and three years of internal exile in Siberia. In 1977 he began compulsory labour in a gold mine near Magadan. In October 1979 Stus returned to Kyiv and soon joined the Ukrainian Helsinki Group which united prominent Ukrainian human rights activists Oksana Meshko, Levko Lukyanenko, Petro Hryhorenko, Vyacheslav Chornovil and others. His freedom did not last for long; a second arrest and imprisonment followed. 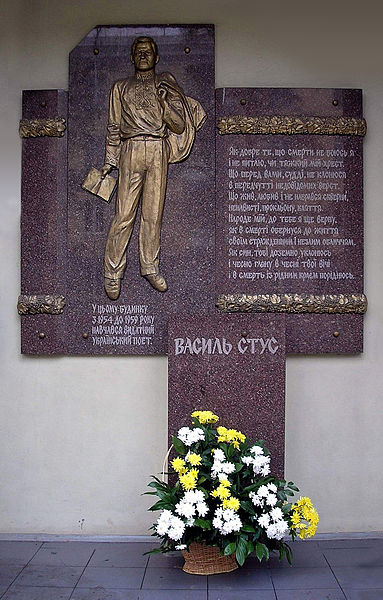 Memorial plaque at the Donetsk university with an inscription of fragments from  poem by Vasyl Stus “How good it is that I am not afraid of death“.

Slowly but steadily the dense philosophical poetry of Vasyl Stus is attracting the attention of translators into various languages.  The British Library holds translations into Polish  (Poezja Wasyla Stusa, Kraków,1996;  YA.a.1998.a.3595),  German (Du hast dein Leben nur geträumt, Bern, 1988;  ZA.9.a.986(23))  and Russian (Vot tak i ty sgorai, Kyiv, 2005;  YF.2006.a.17976). The first English-language translations, Selected Poems by Jaropolk Lassowski, were published in 1987 in Munich by the Ukrainian Free University. Yet the poet still remains to be discovered in the English-speaking world! Only a few poems translated into English are found online, as in this article by Dr Wolodymyr Zyla from the émigré newspaper The Ukrainian Weekly:  ‘Weep, sky, weep’.

To get a flavour of his poetry, very popular in modern Ukraine, you can listen to romances and songs on poetry by Vasyl Stus by Sisters Telnyuk and by Levko and Marko Tymoshchuk in London in 2013.