50 years of exhibitions: a celebration

The recent Georges Braque retrospective in Paris (the catalogue is held by the British Library at shelfmark LF.31.b.9601) was the latest in the impressive series of exhibitions organised by the Réunion des musées nationaux (RMN) in the Galeries nationales du Grand Palais, a wing of the vast exhibition and museum complex built for the 1900 Exposition Universelle. These prestigious exhibitions benefit from the collaboration of major foreign museums, the combined resources of the organising institutions being instrumental in securing important loans.

Renée Grimaud’s 50 ans d'expositions au Grand Palais, Galeries nationales (Paris, 2009; shelfmark YF.2011.b.277), is a lavishly-illustrated survey of some 180 exhibitions staged since 1959, initially in the Louvre, the Orangerie des Tuileries and the Petit Palais, and, since 1966, in the Grand Palais. The presentation is chronological, with a short article describing the most important exhibitions each year, together with factual information about all the others: dates, attendance figures, number of works.

Typically, there are four exhibitions every year, two in the autumn and winter, and two in the spring and early summer; a monographic show is usually coupled with a thematic one (on a civilisation, an artistic movement, a historical figure, or a type of artefact). There have been several unforgettable exhibitions in both categories (no visitor to the great Manet exhibition in 1983 is ever likely to forget the experience). Particularly important, because they define the image of an artist for a whole generation of visitors, have been the monographic exhibitions on French artists, from Poussin to Vuillard; some artists – Courbet, Renoir, Monet, Cézanne – have benefited from two. Exhibitions now tend to be less comprehensive since insurance costs have become so prohibitive and museums, for conservation reasons, are wary of lending major works from their collections.

Exhibition catalogues are the enduring records of temporary events, and the ones published by the RMN (and by their co-organisers in their respective countries and languages) have always been among the best, with introductory essays, detailed entries for each work, high quality illustrations, and comprehensive bibliographies. Several have become standard reference works. A personal selection of the most important ones is given at the end of this article but I would like to describe in more detail two outstanding catalogues, one monographic and one thematic .

The Seurat centenary exhibition in 1991 was, astonishingly, the first major exhibition of the artist’s  work in France. Seurat’s works, paintings and drawings, were sold by his family after his death and most of them left the country. Of the six large-scale paintings he produced, only one (Le Cirque) is now in a French public collection, bequeathed to the Louvre in 1924 (by an American collector!) and now in the Musée d’Orsay.  This exhibition was, therefore, something of a homecoming. Only two of these paintings could be borrowed but the absence of the other four was compensated by the abundance of preparatory drawings and painted sketches (some 30 for La Grande Jatte alone!) which, as it has often been pointed out, have a spontaneity and poetic freedom that the finished, monumental works lack. Seurat was one of the greatest draughtsmen, and his remarkable Conté crayon drawings – mysterious, brooding, melancholy – formed the backbone of the exhibition and are magnificently illustrated in this catalogue. 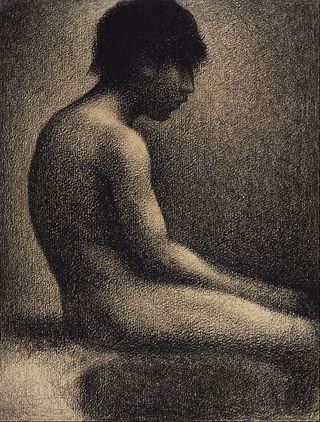 L’Âme au corps, arts et sciences, 1793-1993 was one of the largest (the catalogue lists 1005 entries, many consisting of several items) and most ambitious ever staged at the Grand Palais. It was also one of the most unfortunate, as its run was curtailed when an unsafe roof necessitated the closure of the gallery for several weeks. The exhibition examined the interconnections between science and visual arts from the 18th century to the present. Focusing on representations of the human body, it brought together a wide range of objects – anatomical drawings and wax figures, automata – and a wealth of subject matter – physiognomy, phrenology, magnetism, theories of evolution, Lombroso’s theory of anthropological criminology, spiritism – all examined in eight large sections of the catalogue.

I would, however, like to finish on a more personal note, with a look at one of the first exhibitions I saw at the Grand Palais, in 1976.

Pierre Puvis de Chavannes (1824-1898) was an artist previously mainly encountered, like Gustave Moreau and Odilon Redon, in general discussions of Symbolist art. The decision to stage a major exhibition of his work was, therefore, a brave one. The organisers, like those of the Seurat exhibition several years later, faced the problem of having to represent the artist’s major works, his numerous decorative mural cycles that adorn museums and other public institutions in France, through clusters of preparatory studies – drawings, oil sketches and portable studies or reduced-scale replicas of the monumental works. They rose to the challenge magnificently and the exhibition revealed the peculiar genius of this artist: his refined, dream-like, elegiac arcadian scenes, his pared-down compositions, and also his delicate colourism and cool palette. Finally, in the audiovisual introduction to the exhibition, there was the inspired combination of Puvis’s allegorical pastoral scenes and visions of antiquity with Debussy’s Danse sacrée et danse profane, for harp and strings (1904). 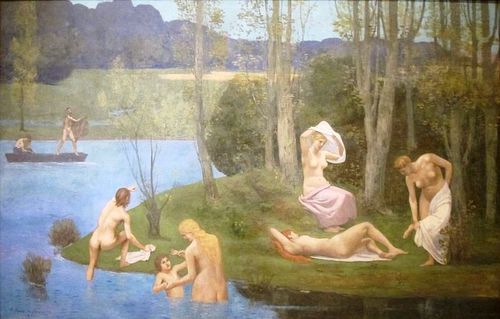 The exhibition was the starting point for a revaluation of the work of Puvis de Chavannes and his influence in late nineteenth-century art. It was followed by numerous exhibitions and publications that culminated in the 2002 mammoth show in Venice which aimed to demonstrate that Puvis exerted a wide-ranging influence in Europe, from Degas, Burne-Jones, and Munch to Carrà, Matisse and Picasso. It also led to the publication of the two-volume catalogue raisonné of his work in 2010.

Some notable catalogues (all published by the Réunion des Musées Nationaux, Paris):

Other publications
From Puvis de Chavannes to Matisse and Picasso: toward modern art, edited by Serge Lemoine. (London, 2002) YC.2002.b.1307