A King's grammar fit for a Prince? Immigration concerns and an early Georgian marketing ploy

When George I came to the British throne, some of his new subjects worried that many other Hanoverians would follow in his wake to live at the British taxpayer’s expense. Greedy courtiers seeking money and influence seem to have been more feared than poorer migrants, although the mishandled crisis of the ‘Poor Palatine’ refugees in 1709 had raised concerns about mass immigration of unskilled workers.

The German translator and language teacher Johann König/John King was not a Hanoverian (or Palatine) newcomer; little is known of his life, but writing in 1715 he claimed to have lived and worked in Britain for some 30 years. He recognised even before 1714 that Germans were increasingly visiting and settling in Britain and in 1706 he published the first edition of his Englischer Wegweiser, a grammar, phrase-book and guide for Germans wishing to learn English. In its preface he describes Germans as “not the least considerable” of the “vast concourse of Foreigners that resort to this Flourishing Kingdom”. 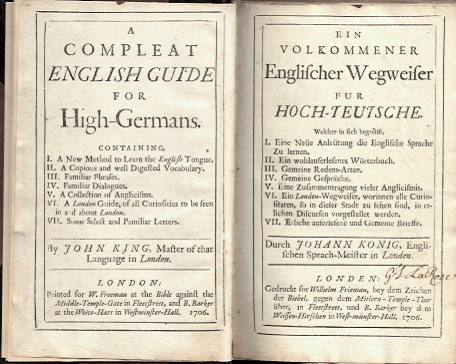 König presumably saw this influx as a positive thing, not least for his business as teacher and translator. So it’s not surprising that he also saw the potential of the Hanoverian succession to bring more Germans to Britain as a good business opportunity. In 1715 he published a longer and more detailed version of the Wegweiser, this time under the title A Royal Compleat Grammar = Eine Königliche vollkommene Grammatica, obviously hoping to appeal to new Hanoverian immigrants by flaunting a royal connection. He seems to have aimed the work at those seeking professional, court or government careers: it includes such features as a long list of court officers (including obscure posts like the Clerk of the Poultry, or Schreiber übers Geflügel) and sample letters to be addressed to royal or noble patrons, neither present in the original Wegweiser. 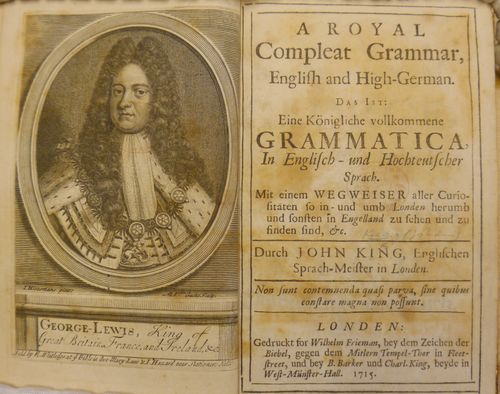 Apparently lacking official royal patronage himself, König seeks to justify the title of his new book with a fulsome dedication to George I in which he describes, “my Endeavours of Enabling Your Majesty’s Subjects, mutually to converse with, and communicate their thoughts to, one another”. He also expresses the hope that his book “may be of Use to His Highness the Duke of Cornwall.” This could be taken as a rather insulting assessment of the future George II’s proficiency in English, but at least König was tactful enough not to mention that the grammar could also have been of use to the new king himself; spoken English was never George I’s strong point.

The Royal Compleat Grammar was never reissued in the same form, but its more detailed approach to grammar was reflected in the eight editions of the Englischer Wegweiser, much augmented by other hands, which were published between 1740 and 1795. Unlike the 1706 Wegweiser and the Royal Compleat Grammar, both published in London, all but one of these later editions bore a Leipzig imprint.

Whether because the expected flood of jobseeking Hanoverians never came, or whether because there was a better market for such a textbook in Germany later in the century than in newly Hanoverian Britain, it seems that König’s royal marketing ploy did not translate into a bestseller in George I’s new kingdom.