Last  Sunday, the Netherlands Association for the Integration of Homosexuality COC. (N.V.I.H. COC) announced the winners of this year’s Bob Angelo medal. The medal is awarded to a person who has in some way advanced the interests of LGBT people. One of this year’s winners is children’s and teens’ author Carry Slee. Slee writes about LGBT issues in a down-to-earth way, rather than emphasising the ‘otherness’ of lesbian, gay, bisexual or transgender people. In doing so, the jury remarked, Slee made a special contribution to the emancipation of young LGBT people especially, by making it easier for them to identify with the characters in her books.

The fight against prejudice for LGBT people in the Netherlands has come a long way, but remains necessary.

The N.V.I.H.-C.O.C. is the world’s oldest still active advocacy group that works to support equal rights for LGBT people and is one of very few gay rights organisations with a special advisory status at the UN. It was founded in 1946 as ‘The Shakespeareclub’, but changed its name to Centre for Leisure and Culture C.O.C.

It had to tread very carefully and meetings were held in secret, because of the semi-illegal nature of homosexuality in those days. Article 248bis of the Dutch Penal Code rendered non-heterosexual activity practically illegal. It wasn’t finally scrapped until 1971.

Advocating equality for LGBT people remains necessary, even in the Netherlands with its reputation of tolerance towards people of different sexual orientation. The British Library’s Dutch language collections include works on the history of homosexuality in the Netherlands.  D.J. Noordam, Gert Hekma and Rob Tielman all discuss the infamous prosecutions against homosexual men in 1731, resulting in severe punishments, including death. We can get a glimpse of these practices from a series of sentences, handed to 33 men accused of ‘sodomy’. They all went on trial at the Court of Holland, Zeeland and Vriesland on the 5 October 1731. The verdict is printed as a standard document of barely two pages long, in which only the name of the defendant needed to be inserted. They were all sentenced to banishment for life from the lands under the jurisdiction of the Court and all their goods were confiscated. 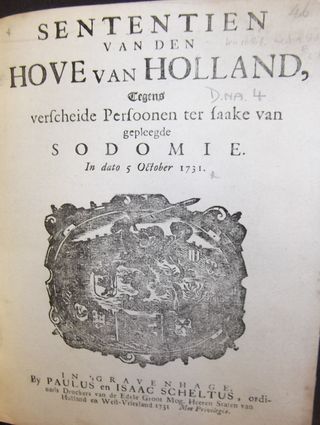 The British Library holds two bound volumes of the journal Vriendschap (‘Friendship’), COC 1950-1954. The recommended book lists it contains give a clue as to which authors were gay. 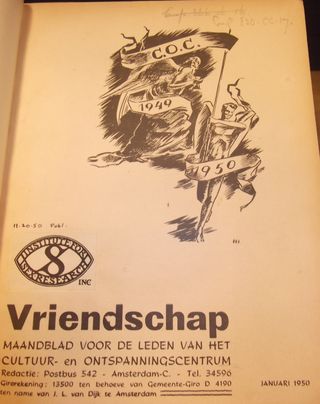 An early issue of Vriendschap. (Reproduced by kind permission of the COC)

This journal was superseded by Dialoog, co-edited by the Dutch novelist and polemicist Gerard van het Reve.

The Netherlands’ best novelist, Louis Couperus, was known to be homosexual, although he could not openly express this. He hints at it in some of his novels, such as De Komedianten (‘The Comedians’). Similar authors are Anna Blaman (1905 -1960), and Gerard Reve (1923-2006). While Blaman and Reve were gay, Harry Mulisch (1927-2010) was straight. Yet he wrote Twee Vrouwen (‘Two Women’), generally regarded as a very sensitive depiction of lesbian relationships. The novel brought him great acclaim from the international lesbian movement. (Dutch lesbians were less impressed: see Marita Mathijsen, Twee vrouwen en meer: over het werk van Harry Mulisch [Amsterdam, 2009;  YF.2009.a.26196].) In 1979 the novel was made into a film with Bibi Andersson and Anthony Perkins.

In the 1980s the Gay & Lesbian Switchboard Nederland was founded and a few years later published a small guide to Amsterdam for gays and lesbians. It lists gay cafes and bars, coffee shops, clubs, shops and cinemas. 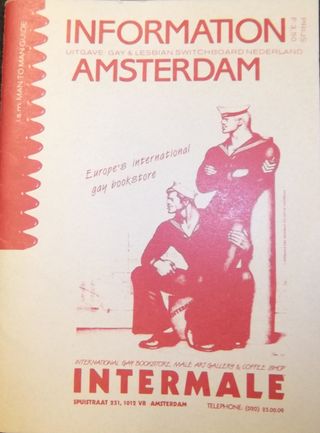 In the 21st century the topic of sexual diversity has become mainstream in Dutch literature – and not just for adults.