In the British Library's Lithuanian collections, probably the most important item is the only surviving fragment of the first printed Lithuanian Bible (C.51.b.13), translated into Lithuanian by Samuel Bogusław Chyliński. The printing started in London in 1660. Although the whole Bible was translated, due to various disagreements only a part of it was printed (Genesis-Joshua). At the beginning of the 20th century only three copies of the printed part were known. The second one, known as the Vilnius copy, kept in St. Petersburg, has been lost since World War I. The third one, known as the Berlin copy, has been missing since World War II. Apart from the printed fragment of the Old Testament the library has also Chyliński's manuscript of his translation of the New Testament. It contains his private notes on the first and last leaves [Add.41310].

Watermark research on the first book ever printed in Lithuanian, the Catechismvsa Prasty Szadei,  by Martynas Mažvydas (Königsberg, 1547) of which there are only two known copies in the world (one in the Library of Vilnius University, the other in the Library of Torun University, Poland) and of a rare Cyrillic book Наука о седми сакраментах албо тайнах (Treatise on the Sacraments, Kyiv, 1657) by Sylvestr Kosiv (two copies in Marsh's Library in Dublin),  has revealed watermarks where it was thought there were none and has shown surprising links with Western Europe.

The author, thanks to support from the Bibliographical Society, has been able to image every page of the 1547 Lithuanian Catechism. This has revealed the crown watermark which has also been found in a 1548 book in the British Library. 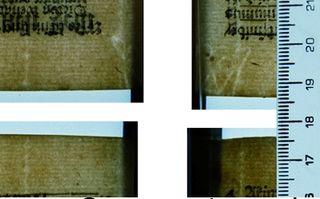 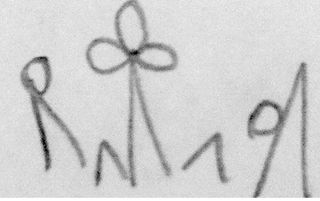 The use of digital image processing has also allowed every gathering of this octavo to be re-assembled. The resultant Photoshop files have 19 layers. Eight are of the front-lit pages. Eight are of the back-lit pages. By selecting the appropriate layers one can therefore choose to view the re-assembled sheet either by conventional reflected light or by light passing through the sheet. Two other layers contain the page numbers. The top layer of the 19 is a rule which can be moved over the images and so rotated as to allow measurements. This facility was used to confirm that the chain line separation in both the books is 25 mm. Here are thumbnail images of the reassembled sheets:-

This was recently reported in an article in the journal Solanus. Here are images for comparison: The image on the right shows the watermark NL-RHA-84 found in paper used by Rembrandt for a drypoint etching created in Amsterdam. The etching is of Saint Jerome beside a pollard willow and is currently held in the Rembrandthuis. It is signed and dated.

The full potential of the imaging techniques as described above is being realised across the globe. The author is eager to contribute to that process and would welcome comments at: look@earlybook.info

References:
‘Treatise on the Sacraments, 1657 -  Two Copies Compared:  The Paper and a Rembrandt’, Solanus: International Journal for Study of the Printed and Written Word in Russia and East-Central Europe. New Series,Vol. 23 (2013) 2716.a.2.